OurFamilyWorld is passionate about preventing teenage pregnancy as well as helping teen moms cope. We’ve done numerous articles on the subject over the last few years. We’ve shared options for pregnant teens, information on government teen pregnancy prevention programs and tips about finishing school while pregnant. We’ve shared tips here and there for parents on preventing teenage pregnancy at home but never really gave you the information in one easy-to-bookmark location. Time to remedy that! 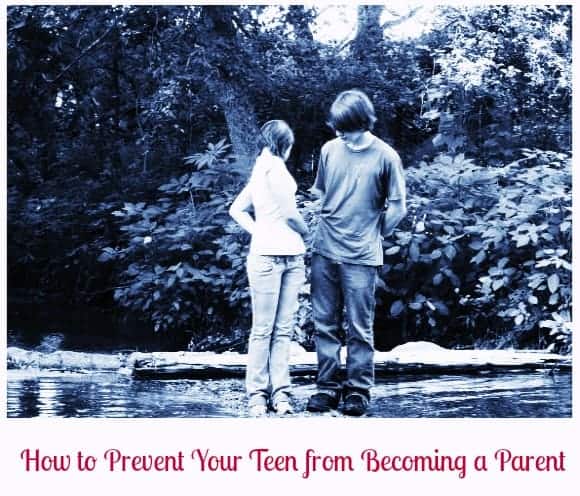 Preventing teenage pregnancy begins in your own home. Government and community initiatives are great for the overall goal of preventing teenage pregnancy and increasing awareness. These programs, however, don’t speak directly to your child on a personal level. Think back to when you were a teenager. Would a billboard depicting a screaming toddler catch your attention? Did you ever bother to read half the pamphlets you received at school assemblies? I couldn’t tell you a single billboard or public service advertisement that I remember as a teenager. I also remember completely zoning out from boredom at school assemblies.

A close encounter with teenage pregnancy

I’m going to be completely honest with you: one of the reasons I am so passionate about teenage pregnancy topics is because I was almost a pregnant teen myself. I had a pregnancy scare at the very young age of 14. Thankfully, it was just a scare. I’m telling you this because I feel it is important for you to know that I’m not just regurgitating tips I find on the internet. I almost lived it. I watched close friends actually live it. I know what didn’t work for me and my friends when it came to preventing teenage pregnancy.

Preventing your teen from becoming a parent: What works and what doesn’t work

Think of these tips as a “try this, not that” guide. Keep in mind that it is a guide, not a hard set of rules. You know your teen better than anyone, so use these tips to tailor your own teenage pregnancy prevention conversations.

Be realistic, not naive. Look, we all want to believe that our children are perfect angels who would never do anything we told them not to. We all want to think that our kids listen to every word we say and do exactly as we instruct. Face it though, that’s not reality. Everyone one of us as teenagers did something our parents told us not to do. Whether it’s as minor as sneaking an extra cookie or as major as sneaking out of the house to go to a party, none of us were perfect. So what on earth makes you think your child is perfect?

If you find condoms in your son’s wallet and he says “oh, they’re for a friend,” don’t assume he’s telling the truth. If you catch your daughter and her boyfriend in her bedroom half-naked and she says “oh, I thought I had a tick on my back and he was just checking!” don’t be naïve. Could both of those things be the truth? Theoretically, yes. Are they likely to be the truth? Not on your life. Face the facts that your teenagers may be doing exactly the things you tell them not to do. Then come up with a plan to prevent it from recurring.

Talk, don’t lecture. Lecturing is a monologue. Conversation is a dialogue. Monologues belong in Shakespeare plays, not in parenting. Put bluntly, they’re boring. Listening to you drone on and on about the dangers of premarital sex, the importance of using condoms and the ramifications of teenage pregnancy is not fun for a teenager. They’ll tune you out before you even get past “sit down; I want to tell you something.”

Instead, have an actual two-sided conversation with your teenager. Ask relevant questions. Is she having sex (she may not answer truthfully, but at least you’re asking). Ask if her friends are having sex. Ask if she knows how to prevent teenage pregnancy. In fact, let her do most of the talking while you fill in the blanks! It’s a lot harder to tune out your parents when they expect you to actually be part of the conversation.

Listen, don’t judge. If your daughter comes to you and tells you that her best friend is having sex and she’s concerned, listen to her. Don’t freak out and tell her how wrong her friend is and how she can no longer hang out with such a bad influence. This going along with talking, not lecturing. If you listen to your teen’s concerns with an open mind and without passing judgment, she’ll be more likely to come to you with problems. If she thinks you’re going to freak out over everything, she won’t want to tell you anything.

Don’t ignore your boys. So much of our efforts are focused on preventing teenage pregnancy in girls. We seem to forget that teen boys play just as much a role in the teen pregnancy rates and that the fallout can be just as bad for them.  Don’t assume you’re off the hook because you only have boys. They need just as much guidance as girls in this matter.

Don’t resort to scare tactics. Scare tactics are antiquated and most teens are completely immune to them. Telling your daughter that having a baby at 16 will ruin her life forever will not sink in. Biologically, your teenage daughter isn’t even capable of understanding long-lasting consequences to her actions. Her frontal lobe isn’t developed enough for that kind of information to really sink in.

Talk about abstinence and contraception.  It may seem hypocritical to tell your teen not to have sex, then in the next breath tell her about birth control but it’s not. It’s realistic. You don’t want your teenager to have sex. You know that, I know that and she knows that. Give her all the reasons that having sex to young isn’t the best choice. Then let her know the options for safe sex. No sex is better than safe sex, but safe sex is better than unprotected sex. Let her know that you’re telling her about the options not because you even remotely approve of her ignoring your advice, but because you’re not naive and you want to make sure she has all the information possible to protect prevent teenage pregnancy.

As you can see, most of these tips rely on one thing: open conversation. That alone has more power than anything else you can do to prevent teenage pregnancy. All the pamphlets, billboards, school programs and scare tactics in the world cannot compete with the simple act of really talking to your child about teenage pregnancy, your expectations and her feelings on the subject.

10 thoughts on “Teenage Pregnancy: How to Prevent Your Teen from Getting Pregnant”