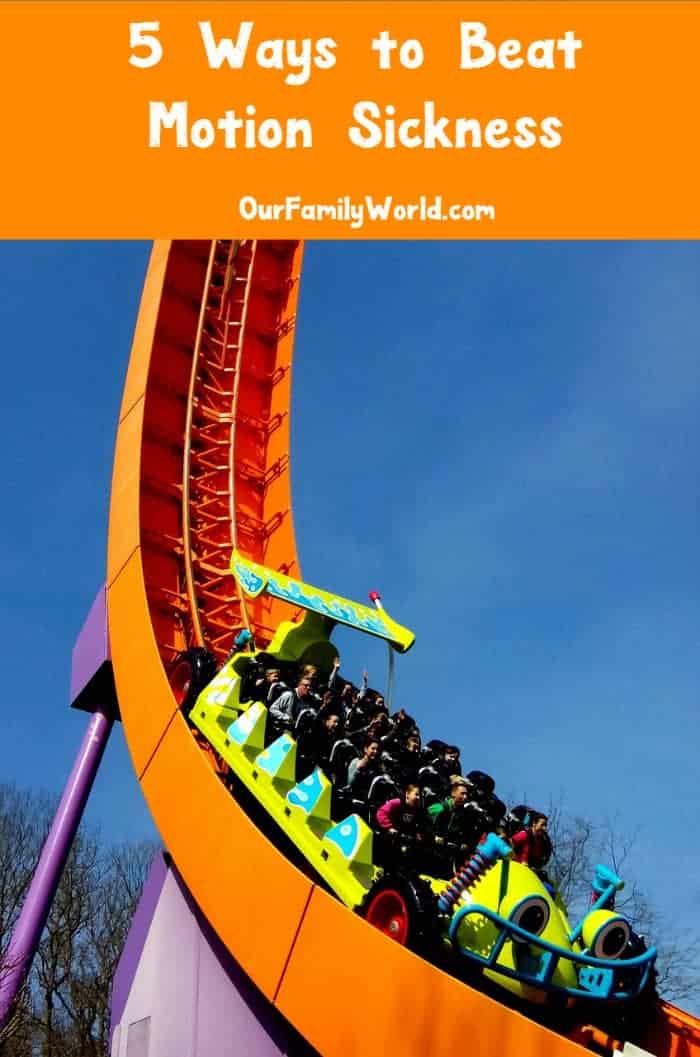 If you have ever been on a boat, an airplane or a long car ride and have been sick to your stomach, then you know what motion sickness is. It isn’t anything that is dangerous, and it isn’t something that will cause you long-term problems, but it can make you feel miserable. This is especially true if you are a frequent traveler. Here are some excellent motion sickness products to help ease the queasiness!

The symptoms of motion sickness include nausea, vomiting, headache, and sweating. They usually ease up once the motion stops. Motion sickness occurs mostly because of an imbalance in your inner ear, your body’s balancing system. Your eyes are saying “I’m moving” but your inner ear and sensory nerves are saying “say what, now? We’re not moving! You’re crazy!” The conflict brings on the symptoms of motion sickness. There are many ways to relieve it, from natural remedies all the way up to prescription medications. Here are a five of the most common. Please consult your doctor before using any medications.

work by placing pressure on a specific pressure point on your wrist that’s known for easing nausea and headaches. They’re not at all invasive, won’t leave you feeling drowsy and won’t conflict with any other medications you may be taking. You might be skeptical, but they really do work! Sea-Bands come in sizes for kids and adults.

Like acupressure, ginger-based natural remedies are a relatively safe option for most people. There are a few exceptions. If you’re taking other medications, talk to your doctor first. It sounds strange, but ginger interacts with over 75 other medications. It’s also not good for people with bleeding disorders, diabetes or heart conditions. If you have ANY medical conditions at all, it’s important to talk to your doctor before taking a supplement of any kind. In my opinion, though, you get better results from eating ginger candy

than popping a supplement. Supplements take a while to reach the full benefits. Ginger candy works almost instantly to ease the queasy feeling. Peppermint candy

also works great, but it has to contain actual peppermint, not the artificial flavor.

If ginger and acupressure aren’t doing the trick but you still want to avoid stronger drugs, there are a few different products to try. Nauzene

is pretty popular and works relatively fast. It contains Sodium Citrate Dihydrate, which is basically citric acid. While many medications use it as an inactive ingredient, used as an active ingredient, it can help balance the pH in your stomach. MotionEaze

is another good product to try. It’s an oil that you apply behind your earlobe. It’s generally safe for most people, including kids.

Antihistamines containing dimenhydrinate are are the most common OTC treatment of motion sickness. These include medications like Dramamine and Gravol. Other antihistamines containing diphenhydramine (like Benedryl) may also be effective. Again (and I know you’re probably tired of hearing this) check with your doctor before taking any medications. While these products do tend to work pretty well, they also make you super drowsy.

If you’re dealing with a really hard case of motion sickness and nothing else seems to work, talk to your doctor about prescription medications. The most common include anticholinergics like Transderm-Scop patch and antidopaminergics like Reglan. Prescription medications must be used as prescribed and should never, ever be shared. If your doctor gives you a prescription and your husband is feeling car sick, do not share your meds with him.

When it comes to fighting motion sickness, I recommend you start with the least invasive and most natural remedies first, then work your way up under the direction of your doctor. You may be surprised by how well those natural remedies work.

Do you have any tips or tricks for relieving motion sickness? Share in the comments!