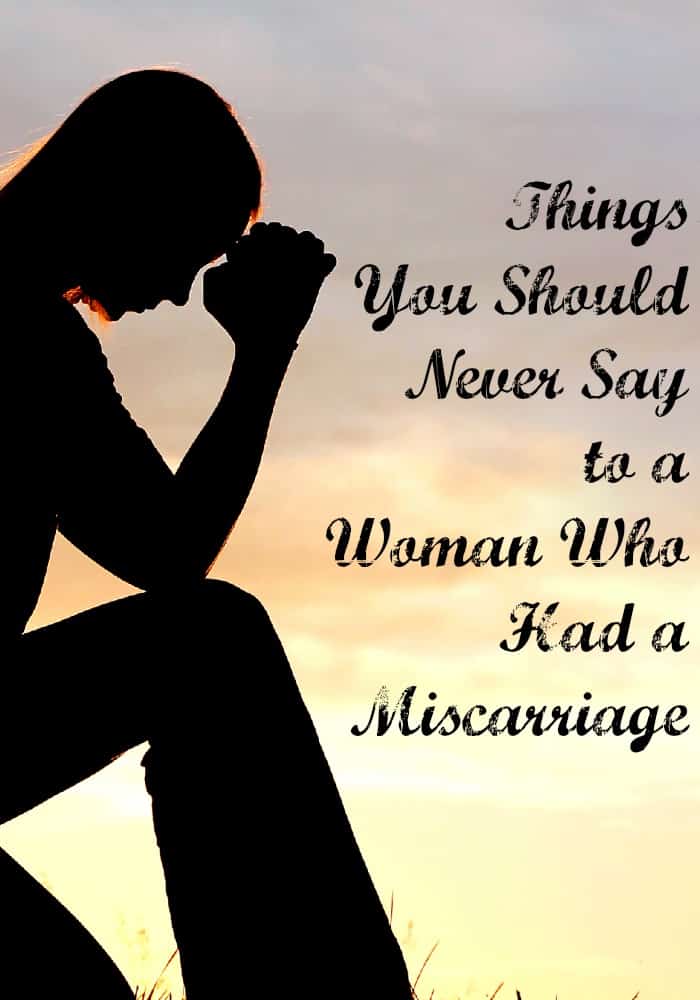 It happened for a reason:

She doesn’t need you to help her figure out why this happened.  Chances are good that she has spent countless hours (and tears) trying to do that herself.  Just tell her you are sorry and give her a hug.  Don’t try and justify it for her. Besides, it doesn’t matter WHY it happened, only that it did. Loss is a loss, regardless of the reason behind it.

At least you can get pregnant:

Yes, the getting pregnant is not the hard part.  Her body is working against her once she is pregnant and miscarries the fertilized egg.  Can you imagine how horrible that must feel?  To know your body is physically rejecting something you want so badly, human life?  Just refrain from this phrase altogether.

At least you miscarried early in your pregnancy:

Early, middle, late it does not matter when the miscarriage happens, it doesn’t make it any easier to deal with just because it happened ‘early’.  My friend was recently pregnant, she has been trying for a very long time and suffered a miscarriage back in January as well.  She didn’t want to say anything, but she was super excited.  Then she found out she lost it;  she was six weeks pregnant.  It is never easy.

In time, you will forget:

Just don’t.  Try, for one second, to put yourself in her shoes.  You find out you are pregnant, the joy, the excitement.  And then you know you lost the baby.  Do you think that is something you think you could forget?  Or would you even want to?  I know you are trying to comfort your friend, but suggesting she will forget her unborn child is just, well, for lack of a better word, ignorant.

I’m sure you’ll get pregnant again right away:

You do not know her medical history.  You do not know how long they have tried to conceive (even if you are great friends, many women keep this info to themselves, because it is painful when they are unsuccessful).  She may have been told that her chances of getting pregnant are less than 1%. Maybe she and her partner have put everything they have saved into IVF treatments, and now there is no money left to keep trying.  I understand you are only attempting to help, but you do not know the nitty gritty, nor do you need to.  Just be a good friend, hug her and let her cry.

Just be compassionate.  Do not try and offer advice to her, she gets enough from other friends and family, she doesn’t need anymore.  What she likely needs is someone just to listen to her, and maybe take her out for coffee.  Other than saying “I’m sorry, I’m here for you”, there isn’t much you should say to her.

Have you experienced a miscarriage or know women who have?  Can you think of other things you should never say to a woman who had a miscarriage? Share with us below in the comments!