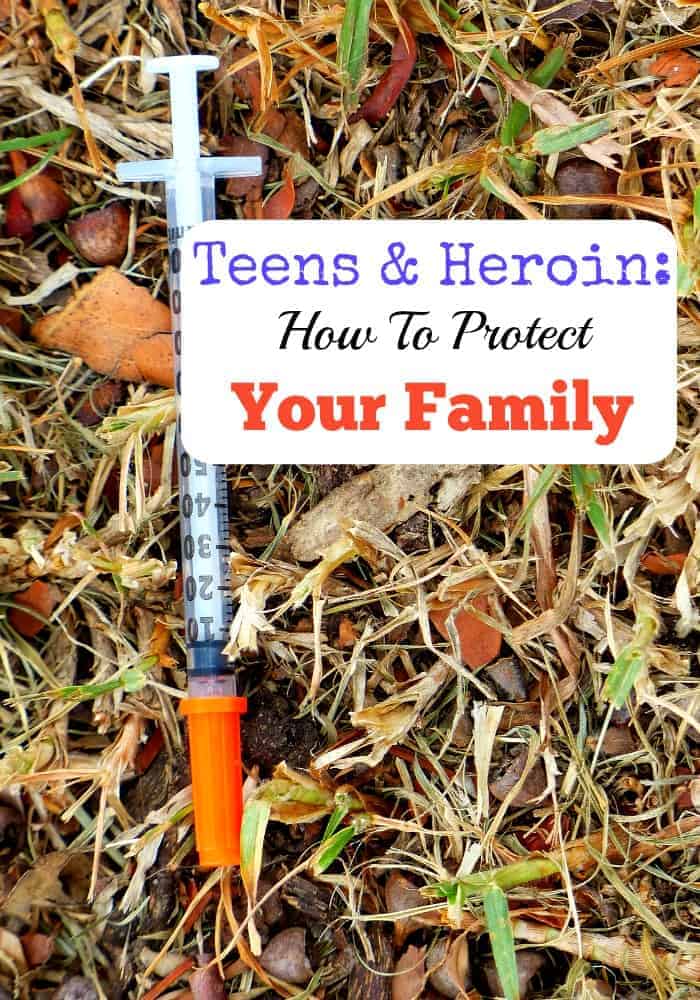 Think teens and heroin use isn’t a problem where you live? It is where I live, and the use of Heroin is sweeping across the US. Heroin isn’t picky. It is finding its way into big cities, small towns, suburbs and rural communities.

Teens And Heroin: How To Protect Your Family

I live in a nice suburban area with lovely neighbors. I also know when I take my family to the zoo or out to other family fun there are people there who use heroin and probably did that morning. Think about that for a second as heroin is much more accessible than you think. The hard part is heroin don’t look always look like “junkies” anymore, it can be that person you chatted up at the park or waved hello to on your morning run. I personally have a friend whose marriage fell apart because of heroin use, and I’m not alone. Not only is Heroin affecting adults from all different backgrounds, but this epidemic is also impacting teens too.

That’s the scariest part when thinking about teens and heroin. Heroin use isn’t limited to the stereotypes anymore at ALL. Chances are good at some point your child will be offered heroin as a quick fix drug. Even scarier is those chances increase as they enter their early twenties right as they head off into the world.

What Happens When A Teen (Or Anyone) Uses Heroin

If you are not familiar, Heroin is a drug made from morphine and puts it on the list for drugs that are made from opium. Heroin is a pain killer that reacts with your brain very similarly to morphine. This drug essentially binds to receptors in your brain, taking away both pain and making you feel rewarded at the same time. After an injection of heroin, users usually feel a surge of euphoria (also known as a rush). Once the rush settles, the user’s skin feels flushed, their arms and legs become heavy, and their entire body is put into a state somewhere between awake and asleep that is also known as a “nod.” Other forms of heroin include pills, snorting and smoking.

Who Is Using Heroin

Heroin, just like morphine, is highly addictive. According to the National Institute on Drug Abuse in 2011 4.2 million Americans who are 12 or older had used heroin at least once. The National Institute on Drug Abuse also estimates that 23 percent of people who use heroin become addicted. According to a 2014 Journal of the American Medical Association study quoted on OhioBar.org, the typical user today is a 23-year-old female located in the suburbs. Heroin is often a cheap drug which is why it has spread so quickly in recent years.

How Do I Know If My Teen Is Using Heroin

Heroin users all have similar symptoms after coming down from a high. Here are some signs to look for if you suspect your teen or someone else you know might be using heroin.

Physical Signs Of Heroin Use

Emotional Signs Of Heroin Use

Most of the emotional signs can be tricky as teens can experience these signs for other reasons also. If you start to see these changes in your teen, you need to investigate what’s happening in their life be it bullying, drug use, depression or something else.

There is a light at the end of the tunnel. According to the National Institute on Drug Abuse, there has been a decline of teens using heroin in the past five years despite a VERY significant increase in adults 26 and older using heroin. That does not mean heroin is not tempting, cheap and easy to find. Don’t assume that because your kid is a “good kid” they won’t be tempted. Teens and heroin don’t have to go together. Protect your family by teaching your kids about the harmful effects of drugs, watching for signs of trouble, and getting help.

Need help? For more information on Teen drug and substance addiction and to get help contact the Partnership for a Drug-Free America hotline at 1-855-DRUGFREE.

Tell us your thoughts on teens and heroin use in the comments.

5 thoughts on “Teens And Heroin: How To Protect Your Family”