When your child falls behind in speaking, it’s natural to ask yourself “is it just a toddler speech delay or autism?”

While only your doctor can definitively answer that question, there are a few tell-tale signs that differentiate a speech or language delay from autism spectrum disorders.

Let’s take a look at them, shall we? 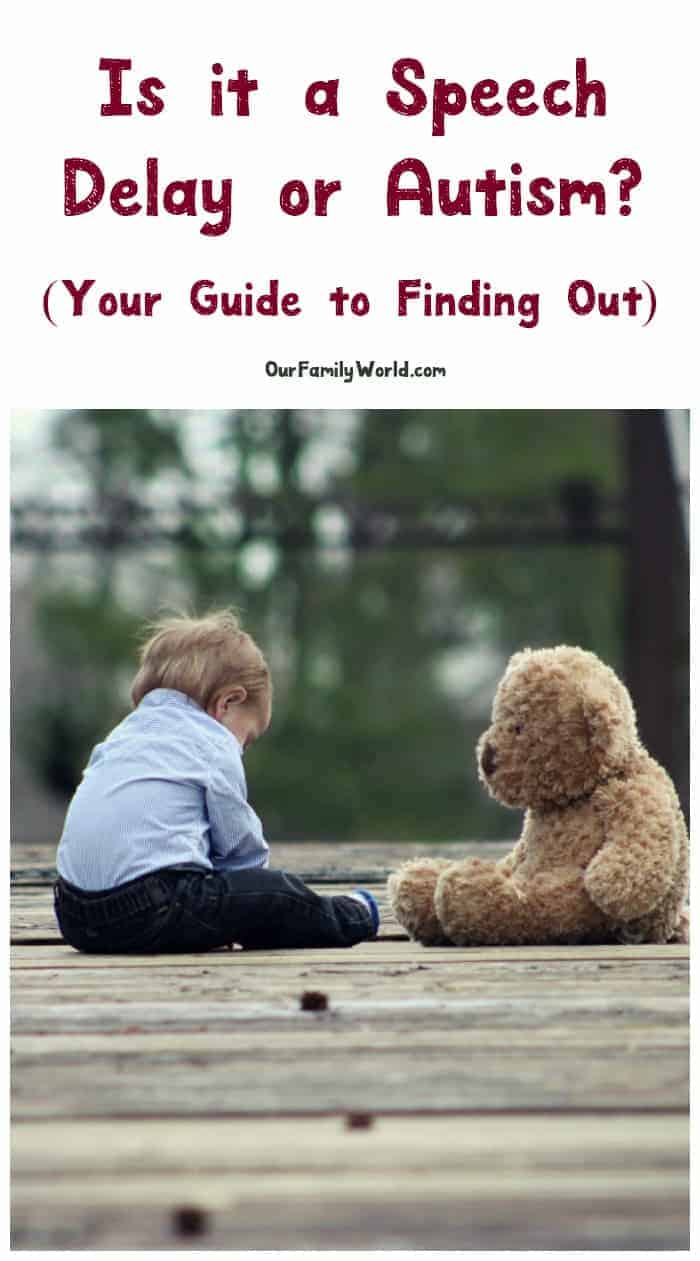 Since speech and communication challenges are often a part of autism, it’s easy to get worried when you’re dealing with a toddler speech delay. As a parent, you start to think “could my child be autistic?” The answer really depends on WHY your child has the speech delay to begin with. Not all children with language delays are autistic, just like not all autistic children have language delays.

Read on to learn more.

Read more►►Speech Delay in Toddler Boys: When Should You Be Concerned?

Is it a Toddler Speech Delay or Autism?

To truly understand the difference between a speech delay and autism, we need to look at the characteristics of each. As you read, keep in mind that you will see some crossover between the two.

Again, this does not mean that your child does or does not have autism. Please don’t take this as medical advice. If you suspect either a language delay or autism, it’s vital that you speak to your child’s pediatrician as soon as possible so you can both get the help and support that you need.

What is a Speech Delay?

One thing that may surprise you: a speech delay and a language delay are two totally different things. I know that surprised me because I often see them used interchangeably. Put in the simplest terms, a speech delay has to do with problems forming the words that come out of your child’s mouth, while a language delay has to do with understanding the words going into his ears.

Your child could understand every word in the dictionary yet still have difficulty saying “cat.” Likewise, your child could theoretically say words as complex as “supercalifragilisticexpialidocious,” yet have a problem understanding the word “cat.” Some children can have problems with both. Since we’re focusing on speech delays today, we’ll talk a bit more about that.

It’s important to remember that your child can outgrow a speech delay. Yes, he may need therapy for several years, but eventually he’ll “graduate.” Later, many kids have no tell-tale lingering signs that they ever had a delay! If you think about it, that makes complete sense, since the word “delay” itself means “late,” or “slow.” When you are delayed by traffic, you still reach your destination eventually, right?

One last thing to remember: a child with a speech delay could be right on track with all of his other milestones. He could have perfect social skills, cope well with changing routines, and follow instructions flawlessly. He just has a hard time expressing himself verbally. That’s important to remember as we head into the characteristics of autism.

Unlike speech delays, where your child has one pretty clear-cut “sign,” autism can literally run the spectrum and comes with a slew of other potential warning signs. Just about every mom with an autistic child that I know says the same thing: it starts with a feeling. Even before their child begins displaying the clinical signs, they just “knew” that something was up.

While autism manifests in many, many ways, let’s take a look at a few of the more common signs.

Difficulty interacting with others:

Children with autism often have difficulty playing with, interacting with, or relating to other people. If your toddler is perfectly content to play in a group of other kids, you’re most likely looking at a speech delay. If, on the other hand, your toddler often sits away from the group and gets agitated when other kids approach, it’s time to talk to your doctor about autism.

Some people just don’t feel comfortable with it for their own reason.

These include things such as flapping, tapping, and spinning. Keep in mind that not all repetitive movements are a sign of autism. Some kids can develop motor ticks (or “habits”) for many other reasons.

Lack of interest in the world around them:

signs may include a lack of curiosity about surroundings, lack of interaction, and a child that seems to live entirely in her own little world. While you may notice this sign as early as a couple of months of age, it becomes more evident in the toddler years. Toddlers are naturally curious, so we expect our kids to test their boundaries and be a bit adventurous.

Not understanding or using speech and language:

This is where speech delays and autism cross paths. Many kids on the autism spectrum have a difficulty understanding language and/or a complete lack of ability to or interest in communicating verbally.

Asperger’s is an exception to many of the classic autism signs. In fact, children with Asperger’s develop b both speech and language at a “normal” (or even above normal) rate. In fact, according to Autism Society, a child must NOT have a language delay in order to be diagnosed with Asperger’s.

While these are not the only signs of autism, they are among the most common. Please remember, though, that every child is different. Even if your child exhibits some of the signs above, it doesn’t necessarily mean an autism diagnosis.

Other issues ►►What Other Issues Can I Expect When Dealing with a Speech Delay?

As you can see, autism is not only about a delay in speech, but also social skills and other developmental delays. Just because your child isn’t talking at the same rate as your best friend’s toddler doesn’t mean that he is autistic. On the other hand, if your tot does exhibit all of the other signs, or even if you just feel like something is “off,” it can never hurt to bring it up with your pediatrician.

Remember, only a professional can diagnose either a speech delay or autism. If you try to make the diagnosis yourself based on what you’ve read on the internet, or even on someone else’s experiences, you could waste precious time getting both you and your child the right kind of help and support.

Have you ever been concerned about whether your child had a speech delay or autism? Tell us your stories and leave advice for others in your shoes below.

35 thoughts on “Is It A Speech Delay or Autism?”