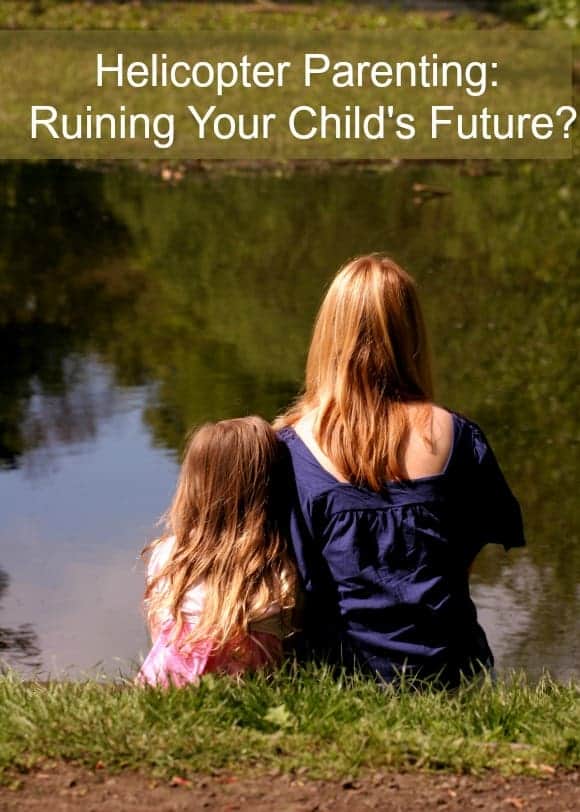 We’ve all heard about helicopter parenting, right? It’s a name given to parents who hover around their child 24/7, much like a news helicopter hovers around a police chase scene. It’s like they’re constantly waiting for something to happen, ready to jump in and solve every problem their child has. Those who follow the helicopter parenting method, though, may actually be ruining their child’s future!

Are you a helicopter parent?

First, let me say that we are ALL engaging in some helicopter parenting methods in some way. When my son was in kindergarten, I switched his classroom because I didn’t like his teacher’s criticism of the colors he chose to use for a squirrel picture. It was actually more involved than that, but I’ve stepped in and ripped my son out of a classroom twice in four years rather than have him deal with a cruddy teacher.

While I let my son play alone in the front yard, I won’t let him walk home from the bus stop. When I was his age, I walked alone every day and at a much further distance, but I’m too scared he’ll get hit by a distracted driver to let him have that freedom. So yes, even I could be accused of helicopter parenting tendencies. Being over-protective in some ways does not mean you’re ruining your child’s future. Being a constant helicopter parent, though, could very well cause problems later in life!

How is Helicopter parenting ruining our children?

I want you to think about your childhood. If you were raised in the previous century, it’s highly unlikely that your parents even knew what helicopter parenting was, let alone followed it. I explored the woods near my house alone by the time I was five. I climbed trees. I fell out of trees. Hard. I got back up and climbed again, because no one was staring at me telling me I could have a concussion or a broken bone. I learned how to get back up on my own. Something that I really needed later in life.

Helicopter parents often don’t give their kids chances to fall, let alone get back up alone. They’re right there to say “that tree limb looks weak!” or “dirt isn’t edible!” Their kids never have a chance to learn that mudpies sound good in theory but taste gross in reality, or that sometimes we fall down. Helicopter parenting kids rarely fight their own battles, so they rarely experience the victory of their own successes.

When you hover over your child so closely that you’re involved in every action they take, they’ll never learn to stand on their own two feet. They’ll also always feel like they need you to help them complete a task, which leads them to believe that they can’t ever take full responsibility for their own achievements. It’s hard to have good self-esteem when you know you only succeeded because someone helped.

What does this mean for the future? A generation of children who are completely unable to think for themselves, for one thing. Will you be there with your child when she heads off to college? Will you take her finals for her? Will you go with your son on his first job interview? His first date (creepy!)? No, you won’t (I hope!). So how can anyone think that helicopter parenting is setting our children up for success?

So how do we let our kids succeed without letting go too much?

That’s the big question, isn’t it? How do we, especially those who have been helicopter parenting all along, take a step back and let go enough to help our kids succeed? I could let my son walk home from the bus stop, but it goes against every parenting instinct I have. Should I just not trust that instinct? I don’t think that’s the answer. I think when we KNOW that there is a STRONG chance that something is dangerous, we step in. If we see our child climbing to the roof to play superman, we stop them. If we see them climbing a tree five feet off the ground, though, we step back and give them a chance to succeed.

We let them fight their own battles on the playground too. My friend and I have a philosophy when our kids play together: if no one is bleeding, we let them work it out. They’d fight for a minute, then get over it and be friends again. Now, if your child is a victim of bullying, it’s a different story. The point is, we all need to maybe take some time to reevaluate when to step in and when to step back. That is the only way our kids can grow and thrive.

What do you think about helicopter parenting? Do you disagree with me? Tell us in the comments!

16 thoughts on “Helicopter Parenting: Are You Ruining Your Child’s Future?”