As disturbing as it is to think about, child sexual exploitation is a very real, very huge problem throughout the world. It’s not a new problem by a long shot, but the digital age has given sexual predators a whole new way to find and exploit children. 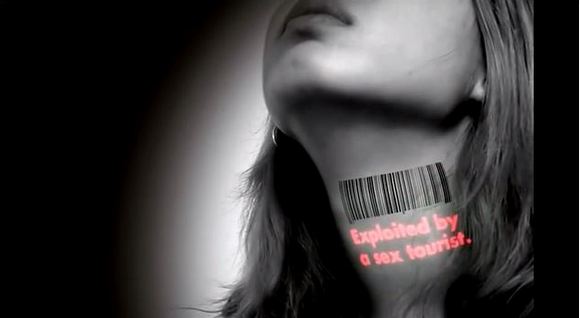 Did you know that 1 million children each year are exploited by the sex trade across the world? One million every year. That figure is like a punch to the gut.  It makes me angry. Makes me want to cry. One child exploited is too many. No child should ever know that pain and fear.

Air Canada Foundation has been working with Beyond Borders ECPAT to help combat child sexual exploitation. While the partnership is not new, the existing in-flight videos driving awareness about the issue have recently been revamped.

A major part of stopping a problem is making sure more people are aware of it. Most people want to help save children any way they can, but many don’t know that a problem like this exists. Air Canada Foundation recently launched a series of three new on-board videos to help spread awareness.


The public service announcements last just 16 seconds and feature a child with a barcode “tattoo.” They are incredibly simple yet incredibly powerful videos. Each video has a strong message: children are not a commodity. The videos are clearly designed to open discussion about child sexual exploitation and get the issue on passenger’s radars.

What impresses me most about these videos is that they rely on one astounding image. They say a picture is worth a thousand words, and in this case the proverbial “they” couldn’t be more right. The videos inform passengers about a shocking issue without going for shock value themselves.

Hopefully, after seeing the message, passengers will check out Beyond Borders ECPAT and learn more about the cause. The award-winning team has made it their life mission to protect children from child pornography and sex trafficking. Air Canada Foundation credits the “Fighting Child Sexual Exploitation in the Digital Age” symposium as being an “eye-opener.” The Foundation was a lead sponsor in the symposium that focused on finding solutions to make the world a safer place for children of all ages.

In addition to the on-flight videos – Air Canada was the first airline in Canada and second in North America to show them – Air Canada Foundation is working closely with Beyond Borders ECPAT to develop a longer video about child sexual exploitation, which will also air on-board later this year.

Visit Air Canada Foundation to see more videos and learn more about this incredibly important cause.

This post is brought to you by Air Canada Foundation in an effort to raise awareness about child sexual exploitation. All opinions are our own.