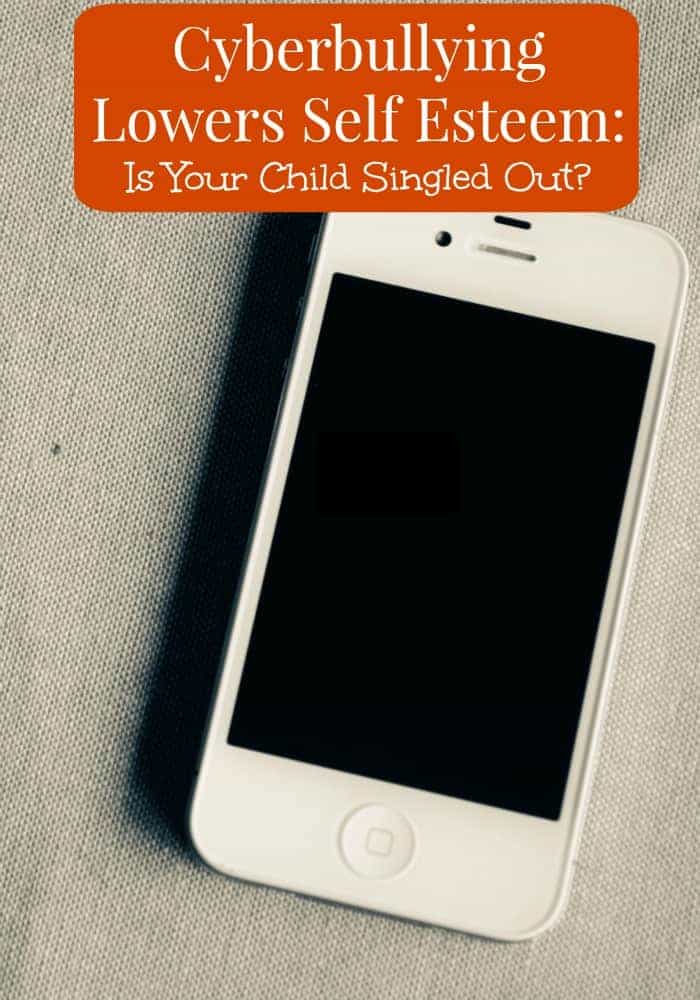 Bullying of any kind causes emotional hurt, but cyberbullying lowers self-esteem in ways that regular bullying cannot touch. Cyberbullying can be ruthless, non-stop and can make you feel singled out in ways traditionally bullying does not. All of this can be hard on anyone’s self-esteem.

Related: Bullying and What it Does to Your Child

Cyberbullying Lowers Self-Esteem: Is Your Child Singled Out?

Cyberbullying: Is It Happening That much?

Many of us are familiar with cyberbullying, but did you know that over 40% of kids experience cyberbullying at some point? How about 75% of students have visited a website specifically bashing another student? Or only 1 in 10 kids will tell an adult if they are being cyberbullied. (Stats via dosomething.org) Cyberbullying can happen through any electronic technology on any website.

Cyberbullying: Where Is It Happening

When I was in school, I have a very vivid memory of a kid coming up to me and telling me my shoes were ugly when I was about 12. Rather than say something back I looked right at the girl, called to my friend, and together we walked away. My bully came running after me. Aren’t you going to say something? I called your shoes ugly. Luckily for me, this time, there wasn’t much she could say to hurt me when I was standing with a friend and she was by herself. I had the upper hand of not being alone.

Electronic cyber bullying is not as simple. With so many kids with cell phones, tablets and other electronic devices teens are more accessible online than ever. Cyberbullying can happen over text, e-mail or on personal websites created to embarrass someone. Cyberbullying more often happens over social media sites. The more widely used sites you are probably already familiar with such as Tumblr, Snapchat, YouTube Twitter, Instagram, Tinder and Facebook.

According to a 2014 study on nobullying.com:

Cyberbullying: How It Hurts Self-Esteem

Many kids who experience cyber bullying are experiencing emotional harassment that is used to embarrass or threaten someone. Through technology, it is much easier to single out a person and make them feel alone. This online harassment is often 24/7. Sometimes mean comments can happen accidently as one person’s mean comment is another person’s joke. Cyberbullying is a pattern of hurtful comments that is not accidental.

For teens, it is almost impossible to resist seeing what the bullying writes. The effects can feel relentless and make them feel alone. Social media platforms are the places where many teens spend their time and are not easy to avoid. Avoiding popping on your social media account means you miss out on valuable info from your friends.

Even worse since cyberbullying happens in the virtual space, it can be hard to know who to trust. Bullies can easily create anonymous accounts and use them to target the victim.  For teens, it feels like everyone they know instantly knows the mean comments that were said, and they cannot easily defend themselves. Often everyone who is important to them in their social circle does see what is said back and forth.

This can all have a toll on teens. Self-esteem issues can quickly spiral into depression. Teens who are cyberbullied are also much more likely feel alone and to have thoughts about suicide. What can help is if teens have open conversations with parents, teachers or other adults. They can then seek advice as to when to ignore comments, when to defend their reputation and how to stand up to harsh online comments. Learn more about How To Prevent Cyberbullying.

8 thoughts on “Cyberbullying Lowers Self Esteem: Is Your Child Singled Out?”