With young kids trying to kill themselves over bullying, the question doesn’t become about who is to blame for the epidemic. It becomes a matter of taking responsibility. 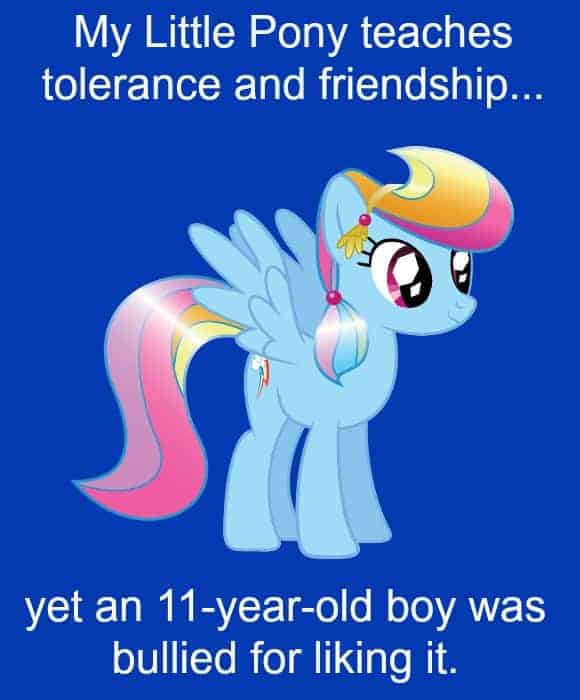 A recent story coming out of North Carolina caught my attention because it made painfully clear that we, as a society, are not doing nearly enough in dealing with the problem of bullying.  North Carolina is not Canada, but we have had no dearth of stories about bullying gone tragically wrong in the great white north.  We have addressed that there is a problem, and that is half the battle.  Previous generations decided that “boys will be boys” and left the kids to figure it out for themselves, with predictably bad results.

In this particular case, an eleven year old boy attempted to kill himself because of the bullying he was dealing with at school.  His favourite show is My Little Pony, and many of the other students were making fun of him because of it.  Ironically, the central message of the show is friendship and tolerance.  Although his attempt failed, he is currently in a medically induced coma and his physician is not sure whether there was any brain damage, though with the amount of time they think he might have been without oxygen, brain damage certainly seems likely.  His parents have decided to share their grief with the world so that the issue of bullying can be discussed, once again.  I assume that they hope that this time we come up with some solutions.

How can parents help stop bullying? 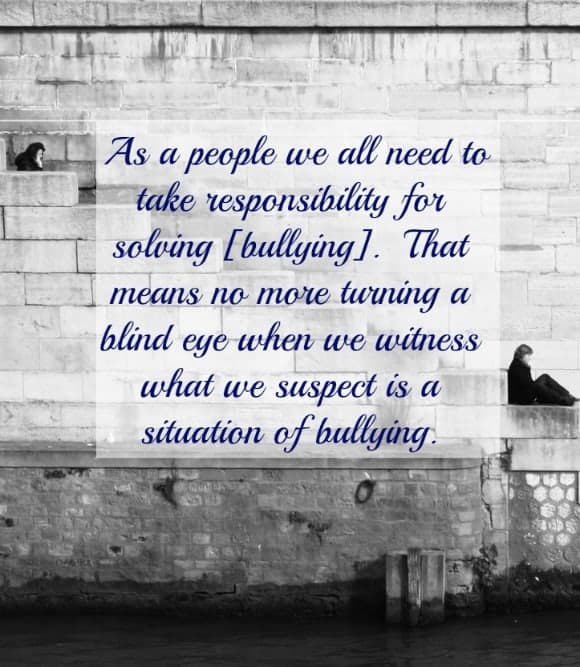 Now that we have identified that there is a problem, we have to come up with a strategy on how to eliminate the problem.  I do not think we have done that yet, but I do have one idea that will, at the very least, get the conversation moving along some.  The most important thing is that we all accept responsibility for solving it.  That is not to say that each of us – bully, victim, or silent witness – is equally to blame for bullying.  Blame is not the issue.  Responsibility is.  As a people we all need to take responsibility for solving this.  That means no more turning a blind eye when we witness what we suspect is a situation of bullying.

As a teacher I make it my responsibility to get to know the students, and to listen to their conversations when they think I am not paying attention (haha, we teachers can play that game too kids!).  I do this to understand the relationships so that I know whether a bunch of kids playing roughly are good friends or not.  I don’t want to stop friends from playing, even if they seem a bit rough.  Guys can be rough, and we generally like it when we are in the mood.  I jumped into the mosh pit once or twice in my youth.  By understanding the dichotomies of the students, I am better able to intervene if there is bullying going on, because I am far more likely to spot it.

I don’t think that this is only the responsibility of teachers, however.  Teachers probably bear the brunt of the load because of the nature of our relationship with those most likely to be either bully or bullied. Others need to pick up the task when our young ones are not at school.  Shopkeepers need to be mindful of not only their merchandise, but how their younger customers are treating each other.  Pedestrians should always not an underage person and keep half an eye out for problems.

If we were half as mindful about creating a safe environment for all children as we seem to be about terrorism, I doubt bullying would be such an important topic.

10 thoughts on “My Little Pony Bullying Incident: What are We Failing to do About Bullying?”