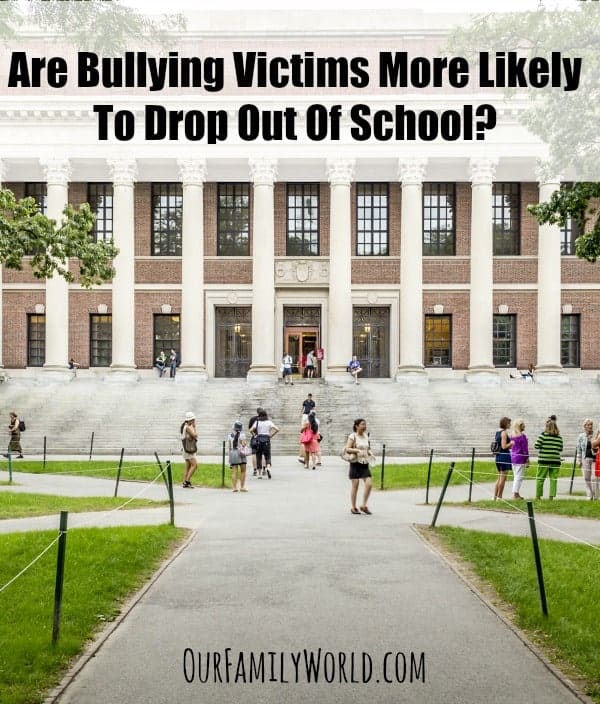 Are Bullying Victims More Likely To Drop Out Of School?  This is a question many parents face as they see their own children becoming the victim of bullying in school.  For many teens bullying can be so severe that the thought of leaving school is much better than the idea of having to continue the torture of being assaulted regularly.

Are Bullying Victims More Likely To Drop Out Of School?

Is there physical violence involved?  For many teens, when bullying becomes violent it is definitely a reason they are more likely to drop out of school.  This is especially true for boys.  As a young man grows up, if he isn’t able to defend himself it can be even harder on him emotionally.  Being unable to fight back not only damages his physical body, but can become very damaging to him emotionally.  It’s tough to show up in the locker room at school with a black eye from being bullied and know that everyone there realizes it’s because you couldn’t defend yourself.

Are there verbal assaults that include sexual accusations or rumors?  For both girls and boys it can be especially hard to face your peers when there are sexual accusations being thrown at you.  Whether it is a rumor that they have been more sexually active than is true, or that they are not sexually active and that is being used against them doesn’t matter.  A young adults sexuality can really become a point of concern when it comes to bullying.  Whether it is activity or orientation, this is another hard subject for teens to face and can often lead to them wanting to drop out of school.

Is there a lack of support from school staff? If your child has been continuously bullied at school, but the staff has done nothing to mediate the problem, it may be a reason they want to leave school.  Unfortunately, there are still schools that do not fully support our children when they are bullied.  Many schools want to stay out of what they consider personal issues with kids.  Staying out of the situation they feel will keep them from being responsible if something bad happens.  Sadly, that is far from the truth.

If your child is being bullied, there is a higher indication that they will at some point think about dropping out of school.  If their school has become a place that is no longer a safe haven, as a bullying victim they are more likely to drop out of school.

What do you think? Are bullying victims more likely to drop out of school? How can we help keep them in school while dealing with bullying?

19 thoughts on “Are Bullying Victims More Likely To Drop Out Of School?”