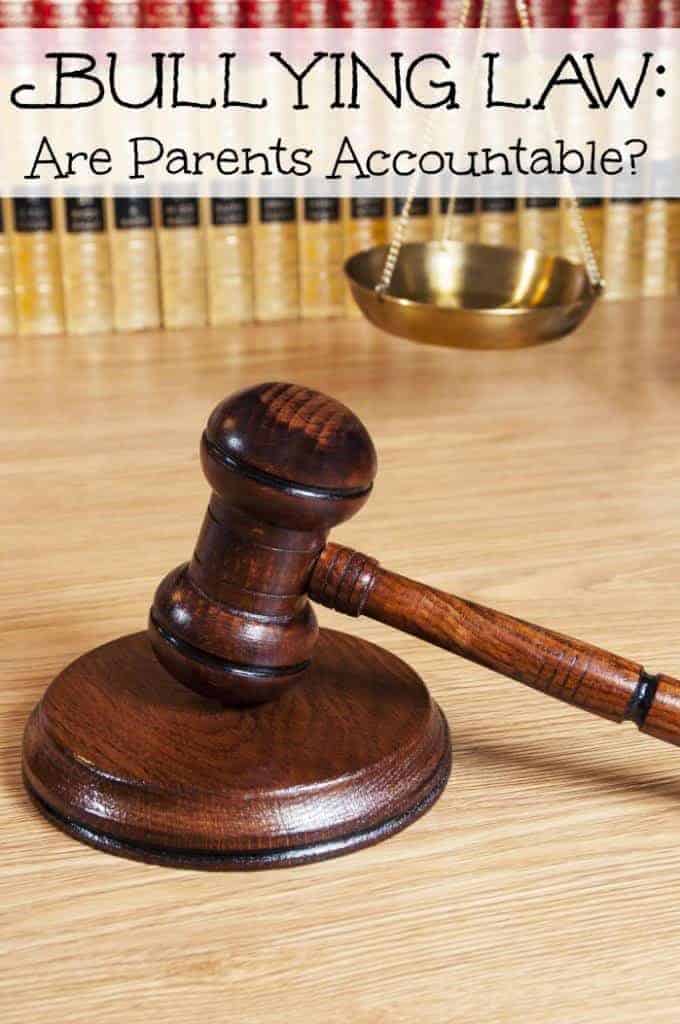 We have already discussed Bullying Law and if it should be a criminal offense.  Now it’s time to look a little closer to determine who is ultimately responsible.  Bullying Law: Are Parents Accountable?  With varied opinions out there regarding who is to blame for bullying, it is no shock to hear that a recent ruling in Carson, California will potentially hold both juveniles and their parents accountable for their actions.  The question now is – what do you think?

Age Does Matter.  While there are truly cruel younger children out there, the majority of violent bullying happens with older children and teens.  If a six year old child is bullying another child, there are a lot of steps that can be taken before criminal charges come into play.  A parent should be obligated to address issues such as mental health and psychiatric development, as well as seek family counseling to work through existing issues at play.  Criminal charges for younger children who are non violent should not be considered, but it should be a matter of holding parents accountable for seeking help to rectify issues.

Was The Bullying Violent In Nature?  Was an individual physically harmed?  Were there repeated violent and harsh instances of verbal abuse? If there has been violence exhibited that led to physical harm or deep mental anguish that requires medical attention, then yes, accountability for the child and the parent should be in order.  The level of accountability should vary dependent upon the actions themselves.  If physical violence has become a repeated behavior, then yes holding parents accountable should be part of bullying law.

Is It A First Offense?  Just as many adults are let off leniently with a first offense, the same standards should apply to children and teens.  A first offender should be given a chance to apologize, make amends, get counseling and change their ways before a criminal charge is handed down.  Accountability for completing assigned behavior helps must be in play.  If the bullying continues, then both child and parent should be held accountable for the actions.

Have Parents Sought Outside Help?  Sometimes there are occasions where bullying law would not be easy to hand down.  Unfortunately, some children have deep rooted mental health issues that result in their abusive behavior.  If a parent has sought treatment and followed recommended procedures to create an environment of change for their child with no results, then should they be held accountable?  I believe that a parent who is faced with a child who is violating what could become bullying law has few choices.  If they fail to follow through and seek help both medically and mentally for their child then I have no problem holding parents accountable.  If they follow through and do due diligence to attempt to help their child to change his or her behavior, then I believe they are not subject to bullying law.

This question is one that will plague us continually.  Bullying Law: Are Parents Accountable?  It isn’t a simple answer.  Much as we have discovered in all of our discussions here, there are many areas that are not black nor white.  If a child turns violently against their own family, there is a time and a place a parent has to step back and hand them over to professionals or authorities for help.  No matter how much a parent does for their child, sadly there are cases that will still result in bullying.

What do you think? Should parents be held accountable when their child violates a bullying law?