Without getting into incredibly long details (we’re talking three year’s worth here), let’s just say we’ve been dealing with bullying in elementary school for a while. Sadly, we haven’t really gotten anywhere. Teachers turn a blind eye, saying it’s just boys being boys. One teacher flat out said my son was exaggerating or lying. The school administration couldn’t be bothered. They’re too busy find new ways to torture our children with Common Core nonsense. I kid you not, my son is already having panic attacks at age nine, but that’s a whole different post!

When Bullying in Elementary School Reaches a Breaking Point

The breaking point came this year. About a month ago, I got a call from the school principal. Jake was in his office. He tried to strangle himself in the middle of class. He wrapped his little 9-year-old hands around his throat and squeezed until he almost passed out. Why? Because his friend told him that her friends said he was stupid and ugly.

I raced to the school, crying the whole way. My 9-year-old son was telling the principal that he doesn’t want to live anymore! What do you do with that? As a parent, where do you even start to process such a statement? I was in shock. My bright, beautiful, funny little boy, saying he doesn’t want to live. How could that be?  My son isn’t depressed. He laughs all the time. He’s goofy. He’s a prankster. He makes faces like this when I ask him to smile nice to show off his new hair cut: 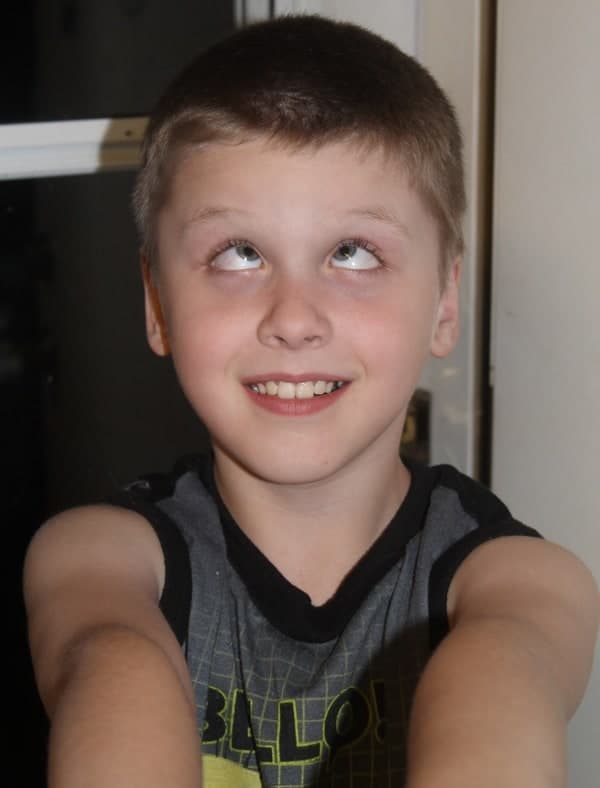 We hear of teenagers and even middle school kids committing suicide because of the torment they face at the hands of bullies. But I never in a million years would think that bullying in elementary school would get to that level. I took my son home that afternoon and spent a long time talking to him about how loved he is, how he is one of the most wanted kids on the planet. I’m also taking him to counseling.

As far as the school goes, I’m happy to say that they seem to be taking the issue a bit more seriously finally. We have a new principal this year. He’s incredible with children and really cares about them. Our last principal, well, let’s just say he would have been better suited working in, say, marketing. He was a “school board man,” not someone that really looked out for students or connected with parents.

After years of being told that my son is making it up, that there’s no real issue of bullying in elementary school where he’s concerned, I feel like someone is finally listening. The school still has a long way to go. I still don’t feel like his teachers or the rest of the staff are really on board with preventing bullying in elementary school. It’s a start, though. At this point, I’ll take what I can get.

Have you dealt with bullying in elementary school? Has it reached a breaking point for you? How do you handle it? I’d appreciate any advice you can offer!

29 thoughts on “Bullying in Elementary School: My Son Doesn’t Want to Live Anymore”