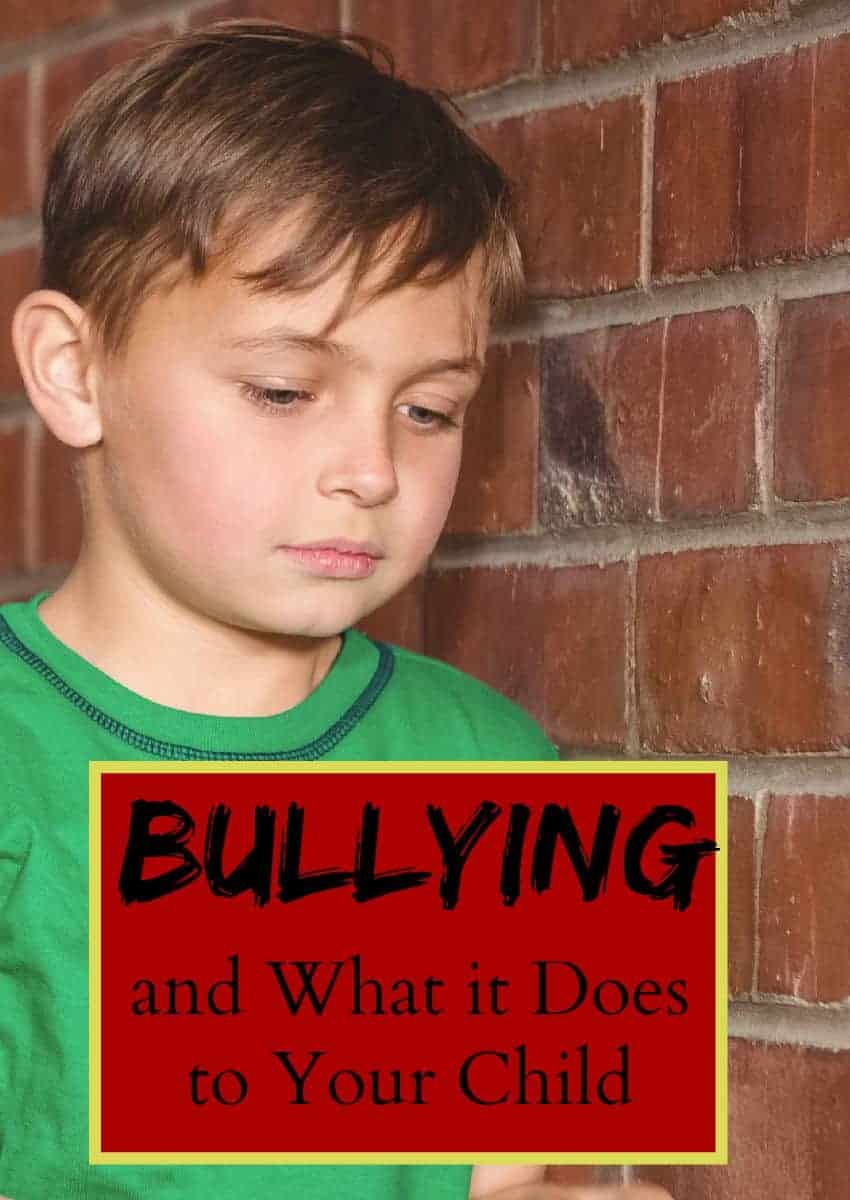 Today we’re talking about bullying and self-esteem, because the two go hand in hand more than we often think. When you were in school, were you the target for a bully?  Did you witness kids being pushed around in the halls?  Bullies have been around for decades.  For some reason, it makes some people feel better when they put someone down.

The reality is, they are just so unhappy with themselves, that making fun of and hurting someone else makes them feel good (but it really doesn’t, they are still miserable).  Are aware of some of the recent facts about bullying?  Let me give you some insight to how bullying has changed and what your kids might be seeing or even experiencing themselves.

Related:ALL the Facts About Bullying You Need to Know to Protect Your Kids

Bullying and Self-Esteem: How Does One Affect the Other in Your Child?

Bullying is aggressive and unwanted behavior directed at someone (typically school aged kids) that involves a real or perceived power imbalance. Have you seen Mean Girls with Lindsay Lohan?  Bullies are typically very insecure within themselves.

Who is being bullied and where is it happening?

School: 85% of bullying is still happening inside the school walls.

Online: About 43% of kids admit to being bullied via social media.  Half of these kids are not telling their parents either.  They are receiving texts and notifications of posts on their smartphones and not telling anyone, suffering in silence.  Cyberbullying is something you or I never had to deal with.

Girls: Girls can be mean!  I know, I am raising a girl who is in first grade this year and is already coming home telling me that her ‘friends’ are being mean and they tell secrets and then won’t tell her.  These are 6 year olds!  Being a girl, she is more likely to experience social and psychological bullying.

Boys: Boys are no better.  They tend to be physically bullied, like being pushed and challenged to fight.  I am also raising a boy, but he is only 7 months right now.

Keeping quiet: 58% have not told their parents they have been bullied.  That means that more than half the kids being bullied, are quietly suffering daily.

Back in the day, you might see someone being pushed into a locker, or have their books knocked out of their arms as they mind their own business and try to get to class.  And both of these can still happen, but there are so many more ways a bully can hurt his victims these days, and technology plays a huge part.

With so many different ways to be ‘connected’ between texts, snapchats, and other forms of social media, information (and rumors) can get spread quickly.  Many kids these days have access to smartphones in addition to computers.  Anyone can hide behind a screen and say mean and awful things about someone else, and the victim might not even know who it is.  They create fake screen names and accounts and let the rumors fly.

Just because they are being bullied from behind the scenes, doesn’t mean that it doesn’t spill over into their day-to-day life at school.  Everyday in the U.S. 160,000 kids miss school for fear of being bullied.  This means they are so scared of what might happen at school, a place they are supposed to feel safe, that they would rather stay home and lie to their parents about why they are not going to school.

How does all of this affect your child’s self-esteem?

Children who are bullied suffer so much more than you might realize.

School: Their grades suffer and they have poor school performance.  So when you get the report cards and you notice grades are going down, have a conversation about what else might be going on.  Avoid ‘yes’ and ‘no’ questions.  Make it your job to know what is going on in your child’s life when they are not with you.

Migraines: As adults, we know stress can cause headaches and migraines.  Imagine yourself as a child, and under adult-sized stress.  Imagine if you felt like you couldn’t go to work because you were going to be made fun of, and possibly physically abused.  If your child starts to experience migraines, have a conversation about what happens at school.

Lasting effects: Being bullied for long periods of time can have damaging lasting effects.  Your child will be at a greater risk for depression and anxiety.  They might even start to resort to drugs and alcohol as a result of years of bullying.

And then there is Bullycide

14% of high school students have considered suicide because of bullying.  This is just reflecting those who have considered it and admitted to it.  Can you imagine what this stat would be if we took into account those who have committed suicide and those who have thought about it but haven’t admitted it?  There are over 4,000 deaths per year as a result of bullying (according to the CDC).
As you can see, bullying takes a major toll on self-esteem. Please talk to your children.  This has certainly opened up my eyes to what my daughter tells me when she comes home from school.  I will be approaching our conversations a little differently from now on.

Have you seen the effects of bullying on self-esteem in a child close to you? How did you handle it?  How will you address this very real and damaging issue with your kids?  Share your experiences with the rest of us below.  It takes a village to raise a child.

7 thoughts on “Bullying and What it Does to Your Child”