As you may know, October is National Bullying Prevention Month. While we believe it’s important to fight bullying every day, having a month dedicated to it is definitely a great way to raise awareness. In the spirit of that, I’ve rounded up ten bullying statistics that you really need to know now. Let’s check them out! 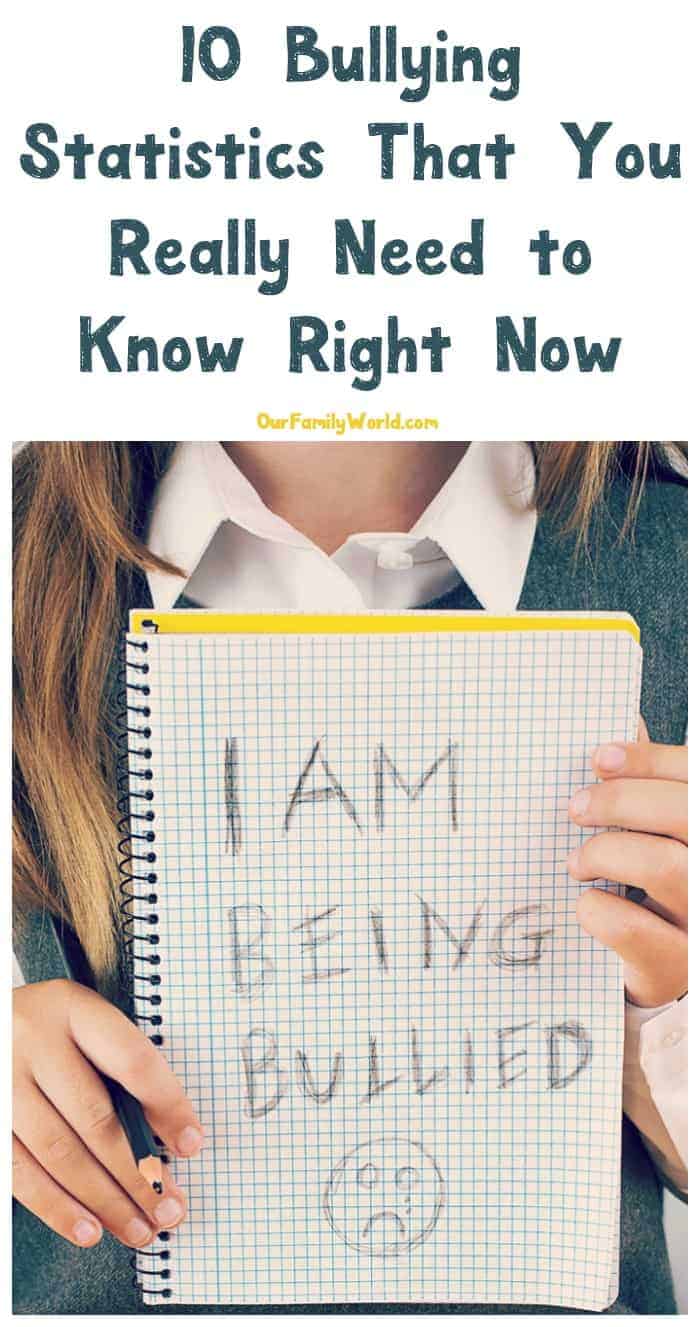 As I said above, bullying prevention is something that we should be thinking about year-round, not just during October. Bullying has gotten out of control not just in the United States, but around the globe. It’s affected my own son so much that I felt I had no choice but to remove him from his school and enroll him in cyber school. While he’s thriving like never before, it’s still sad that it had to come to this. His previous school had a zero-tolerance policy for bullying. Unfortunately, they also had very archaic definitions of what actually constitutes being bullied. When another child repeatedly told my son that he should “go die, just like your stupid dogs and aunt,” the principal decided that it was “just kids being mean,” not bullying.

Bottom line: we talk a good game with our “zero tolerance” policies and anti-bullying posters, but when it comes down to actually preventing it, our efforts don’t really seem to be making a big enough dent in the epidemic.  What can we do better? I wish I had all the answers. I do, however, have a few ideas on where we can start!

10 Things You Need to Know About Bullying Prevention

1. Less than half of bullied kids actually report it.

According to the most recent National Center for Educational Statistics, more than 20% of students report being bullied. Report being the important word there. Only 36% of bullying victims actually report it, so that number is likely significantly higher. Getting your kids to open up about bullying is vital. Here are a few tips on how you can start the conversation and help them understand that it’s okay to speak up.

2. More than half of bullies stop when another peer intervenes

Kids often feel powerless to stop bullying, but studies show that 57% of bullies will stop when another classmate or friend intervenes. Teach your kids what to do when they see someone being aggressive or cruel towards another classmate. Let them know that they DO have the power to stop it.

3. School-based bullying prevention programs can help curb bullying by up to 25%

Schools that implement (and actually follow) a strong anti-bullying program see a 25% reduction in the problem. If your school doesn’t have a program in place, check out a few alternative ideas that you can share with the administration and teachers.

4. Bullying causes a myriad of emotional problems in our children that can affect the rest of their lives

It’s bad enough that being bullied wrecks our kids’ self-esteem and can lead to depression in some children, but the emotional toll doesn’t end there. Kids who are taunted, teased, and emotionally abused by their peers can also see a sharp decrease in their academic performance. My son nearly failed 6th grade because of the emotional strain. Once I removed him from the situation, he started getting straight As. Victims of bullying may also suffer from anxiety, substance abuse disorders, and sleep disturbances, all of which can have a long-lasting effect.

5. Being bullied also takes a physical toll on children

As if the emotional toll isn’t bad enough, kids who are bullied can also suffer from physical symptoms. Headaches and stomach aches are among the most common. I can tell you from experience, my son had both nearly every day during 5th and 6th grade. After ruling out medical causes, his doctor determined that they were stress-induced.

6. In-person bullying is still the most prevalent form.

If you think that most bullying happens online now, think again. In high school, in-person bullying is still more prevalent at 20.2%. Cyber bullying is close, though, at 15.8%, according to the CDC. Middle school statistics show a much wider gap, with 45% facing bullies in person and 24% online. A whopping 90% of kids who reported being bullied online are also being bullied offline.  Our efforts to stop it need to focus both online and in schools themselves.

7. Children on with disabilities are more likely to be bullied

Children with disabilities are up to three times more likely to be tormented and teased than children without disabilities. Up to 60% of kids on the autism spectrum face bullying. These children are also less likely to report it, as they are warned not to “tattle” twice as often as other kids.

8. Bias against race, religion, or nationality is still the one of top reasons kids bully

It’s sad that in this day and age, so many kids are still being bullied because of the color of their skin, their religion, or their nationality, but it remains among the top “reasons” that kids choose to torment other kids. According to a 2012 study, more than 33% of kids report bias-based bullying. If that study was performed today, I fear it would be higher. Unfortunately, it’s also one of the hardest types of bullying to fight because many kids learn that behavior at home from their role models. Children tend to take on the ethics and political views as their parents, at least until they are old enough to really start thinking for themselves.

9. LGBTQ teens are among the hardest hit by bullying

A whopping 74% of LGBTQ teens suffer from name calling, and over 36% were physically harmed because of their sexual orientation or gender identification. However, one study showed that when schools include LGBTQ students in their anti-bullying policy, that number goes down a bit.

10. Linking suicide to bullying may actually cause more harm

Researchers are still trying to determine the link between bullying and suicide. While some studies do show that kids who are victims of bullies are more likely to self-harm and commit suicide, others believe that being bullied alone isn’t enough to drive a child to take his life and that there has to be additional preexisting emotional disorders. While we definitely need to determine how the two are linked, we may want to keep those results to ourselves and not share them with our kids. The CDC warns that letting kids think that suicide is a natural response to bullying can actually normalize the behavior and lead to copycat cases.

Even if just 1% of our kids were being bullied, it would be too much, but as you can see, the numbers are SO much higher than that. If 30% of our children came down with a horrible virus, we’d create a vaccine for it. If 1/3 were failing every test, we’d reexamine our curriculum. One in 3 of our kids are being teased and tormented, physically and emotionally abused in a place where they should feel safe. We NEED to do more. Instead of sharing more alarming statistics next year during National Bullying Months, I would love to write about how those numbers have dropped significantly. Let’s make it happen!

What are you doing to teach your kids about preventing bullying? Share your thoughts, experience, and advice below.