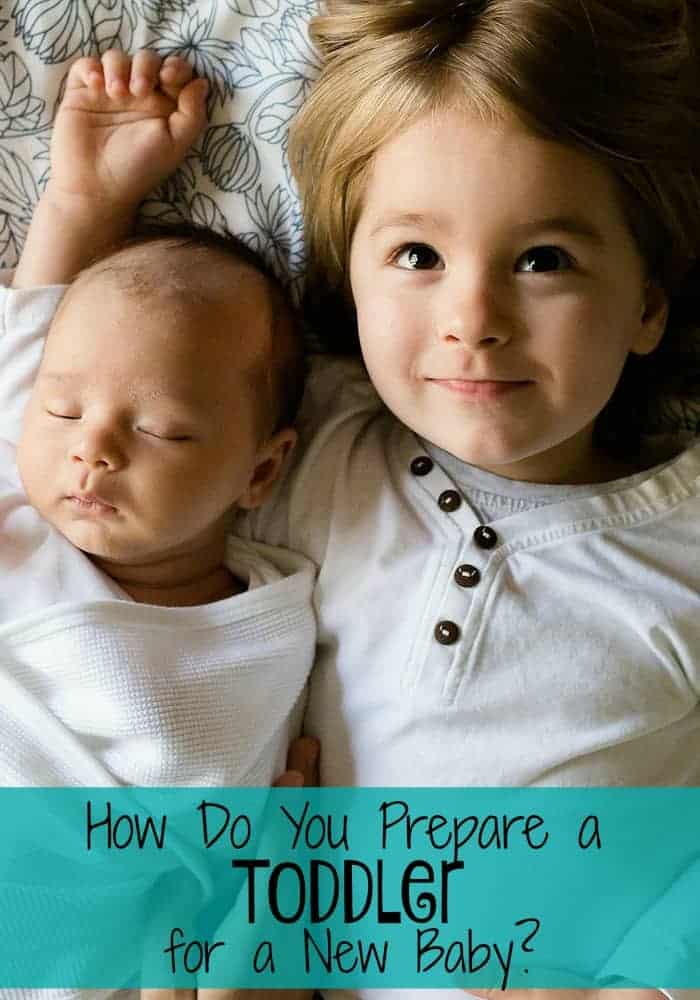 How do you prepare a toddler for a new baby?  It can be scary, for everyone, thinking that your little angel is no longer going to be an only child, but it is exciting too!  How is going to react?  Will he throw more tantrums?  Will the terrible 2’s turn into horrifying 3’s?  It doesn’t have to be that way, there are things you can do to help prepare your toddler for a new baby.  Check out these ways, and my experience below!

Related: How to Get Your Child Excited About Being an Older Sibling

How Do You Prepare a Toddler for a New Baby?

Little kids love to help out right?  Whether you are folding socks or pumping gas, they are always asking to help.  So when you are doing things to prepare for the baby, get your toddler involved.  Talk to him about what you are doing.  Picking out bedding?  Pick 2 and ask which one he likes better. Let him pick out a toy for the new baby.  My daughter was 5 when I was pregnant with my son, so not really a toddler but I still got her involved and it helped to ease the transition from only child to big sister.

This was something I had tried to do and just never did before my son was born.  I wanted to prepare a Big Sister bag for my daughter filled with things for her and things she can do with the baby, like a book she could look at with him or something.  Having a new baby is a special time, for everyone involved, but the toddlers in our lives are typically selfish little people (simply because developmentally that’s where they are).  Play up the fact that he is going to be a big brother!  It is an important day for him as well!

Tell him you love him

I know, this seems to simple and should go without saying but hear me out.  Remember how I said toddler are selfish little people?  His world is no longer going to have all of your attention, you are going to have to split your attention now between baby and big brother.  He may throw a few extra fits because you have to give your attention elsewhere and he may not.  If we all knew how a toddler was going to react to certain situations, we would know that we should have given the red sippy instead of the blue, even though he asks for the blue one daily.  My point is, you just don’t know how a toddler is going to act in any given situation.  Just love on him as much as you can.

As I said, my daughter was 5 (now 6) when my son was born.  She was my only for all those years of her little life.  I did a lot for her (maybe too much at times, but who is to say).  So when she asks me to do something for her now, that she is completely capable of doing on her own, I know she is need of some attention.  She even says sometimes “You always do things for Dexter but not me.”  I see what you are doing there!  That’s when I know that it is time for the conversation once more about how she is a big girl and I taught her how to do those things on her own, and she is going to have to help me to teach her brother.

I never worried with her if she would be jealous, maybe because she was a little older, and not a toddler, but she was also so excited from the beginning.  I got her involved in some simple decisions when it was appropriate, I let her pick out some clothing and toys for her new little brother, but when it came to her wanting to name him Eyeball I had to say no (true story!)

How have you prepared your toddler for a new baby brother or sister?  Share your stories with us below in the comment section.