March is colic awareness month, something I have a little too much experience with. See, I suffered through infertility for six years before having my son. When I finally got pregnant, I imagined this perfect little life, with a baby that slept through the night and smiled with joy all day long. Yes, I was delusional. Aren’t we all a little delusional during pregnancy? I can’t be the only one! 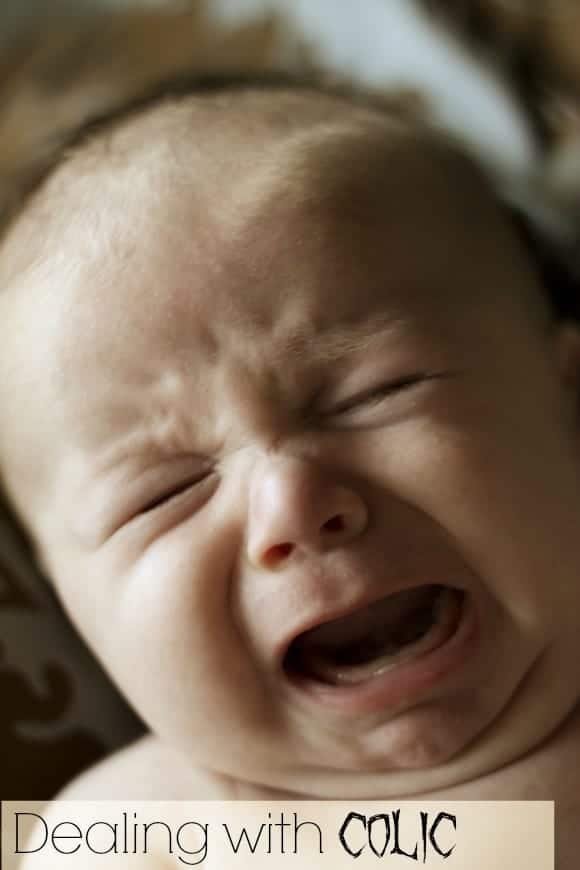 Reality set in way too early when my son was born 8 weeks premature. For those first 8 weeks, he was pretty much just eating and sleeping. I thought “wow, even though we had a rough start, he’s exactly like I dreamed!” Then he reached his due date and the colic began.

What the heck is colic and why does it turn my baby into a crazed lunatic?

Jacob screamed constantly from about 5pm until 5am. He just howled non-stop. I read every single magazine and internet article on how to cure colic. I tried “bicycling” his feet, holding him up in front a fan and giving him anti-gas drops. I rocked him, bounced him, snuggled him and sang to him. At some point every night, I’d eventually hand him over to his father (we were together at the time) or my mom and said “I’m done.”

What is colic? Who the heck knows? I sure don’t! After months of dealing with it, I still have no idea what it is. Seems doctors don’t know what causes it either. The Mayo Clinic defines it as when your baby cries three or more hours a day three or more days a week for no apparent cause. Wow. That really helps, right? My favorite part of their definition? “But take comfort: Colic is relatively short-lived. In a matter of weeks or months, the colic will end…” You know what, Mayo Clinic, weeks or months seem like years when your baby just won’t stop crying!

Here’s the thing that no one really tells you on medical sites: colic makes you feel like a total monster. First, it makes you feel like a complete and utter failure because you can’t figure out how to make your baby stop crying. You start to think that you just don’t have what it takes to be a mom. That’s not the worst part, though!

Colic can make you resent your baby. Yup. That little bundle of joy that I spent six years begging the universe to give me: I wanted to send him back! I was so exhausted and frustrated that I became convinced I was just a terrible mother and didn’t know the first thing about raising a baby. Talk about causing massive guilty feelings. In fact, I had to go to therapy because I felt so guilty that when my baby was screaming bloody murder for hours on end, I really didn’t like him. Oh, don’t get me wrong, I loved him to individual little bite-sized pieces, but I didn’t like him very much. How horrible is that? Can you imagine not liking your own baby?

Everything you feel is normal and okay, as long as you don’t act on it!

When I was in therapy years after the colic finally ended (I was in for my anxiety disorder, but the colic came up), my therapist told me that everything I felt was normal. Her own baby had colic so she totally understood. She said she wanted to toss her baby right out a window at times, and that’s totally normal too. It’s okay to be mad, frustrated and thinking totally irrational thoughts. As long as you don’t act on any of your irrational thoughts, you’re doing just fine.

If at any time you feel like you’re actually going to hurt your baby, though, hand him over to someone else and walk away for a bit. If you don’t have anyone to help you, put him down in his safe crib and walk out of the room. While I would never recommend leaving a newborn to “cry it out,” when you’re ready to snap, it’s okay to gather your wits for a moment.

The great thing about colic is that it does end…eventually. For Jacob, it took like two months. Those were probably the longest two months of my life. Then one day, he just stopped crying for hours on end every day. Just like that. It was like coming out of the middle of hurricane and finding that you not only survived, but everything was still in one piece. It’s like leaving an 8-week long music concert for a band you can’t stand and discovering the joy of peace and quiet. The end of colic is like nothing you’ve ever experienced before, trust me.

If you think your baby has colic, check with your doctor first to make sure that there isn’t something else going on. If it turns out you’re right, buckle up. It’s going to be a bumpy road. You’ll get through it though! I promise!

Did your baby have colic? What tricks or advice can you share with other moms going through it?

12 thoughts on “Colic: What Do You Do When Your Baby Won’t Stop Screaming?”