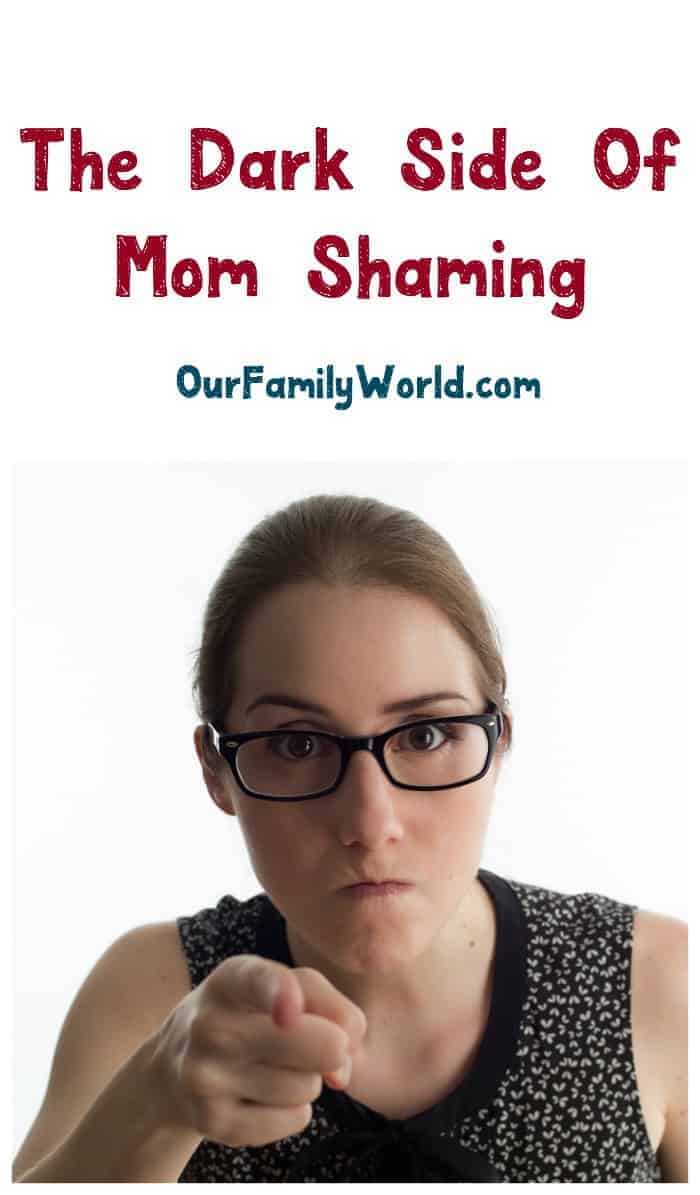 Being a mom is such an adventure.  We’re so fortunate to live in a time where we can connect with other mothers from all over the world through social media.  But unfortunately, there is a dark side to being a mom these days: Mom Shaming. Oh sure, most moms have been given advice from a lot of different sources: friends, family, co-workers, you name it.  Even strangers think it’s appropriate to a give a mom advice.  Newsflash: IT’S NOT.  And when one mom puts another mom down and shames her?  SO NOT COOL.

The Dark Side of Mom Shaming

You know what I’m talking about: moms putting other moms down for the choices they make when it comes to raising their kids.  As an example, some moms don’t breastfeed.  Some women choose not to, while others physically can’t for any number of reasons.  Whether they can or can’t, a mom’s decision on how to nourish her children is hers and hers alone.

Rather than not even noticing how another mom feeds their baby (or perhaps noticing, but choosing not to comment), some women take it upon themselves to draw attention to it, and also to try to make that mom feel bad about it.  Essentially, to degrade that mom’s choice.  To make that mom feel ashamed for not breastfeeding their child.  To turn that mom into a Bad Mom.  And on the flip side, still other moms are shamed for breastfeeding in public – basically, shamed for providing their baby nourishment.  Then the breastfeeding mom becomes the Bad Mom.  Mom Shaming at its finest.

But why?  Who really benefits from making a mother who is working her tail off feel bad about her parenting decisions?  Does the Shamer feel some sort of victory for putting the Bad Mom in her place?  Does the Shamer feel as though she is a better parent for making a different parenting decision (in this case, breastfeeding or bottle feeding)?  I have no idea, but it certainly says a lot about our society when moms think it’s OK to put each other down.

Using myself as an example, I remember being told that I should really try to put more of an effort into my appearance when my son was a newborn by a Mom “Friend” of mine.  First of all, WHAT THE HECK???  Secondly, that’s actually a horrible thing to say to anyone, especially a woman who has just given birth to a human.  A few weeks later, that same “friend” told me that I really shouldn’t bother putting on makeup if I was just going to be spending my days with my baby.

The thing is that at the time, when my son was so little and I had no clue what I was doing (and was incredibly sleep deprived), a nasty comment could very well send me spiraling into self-doubt, and reduce me to tears.  I felt ashamed, and it didn’t feel good… it made me feel awful and lazy and ugly and, worst of all, like a terrible mother.  AND the woman who said it is a mom herself and (was) a supposed friend!  I started to wonder if I was a Bad Mom for not being put together.  Or was it selfish of me to want to feel better about myself by actually taking a few minutes to brush my hair and put on lipgloss… and did that, in turn, make me a Bad Mom too?

Whether we like to admit it out loud or not, being a mom is hard work.  Very hard work.  Actually, it’s very hard thankless work a lot of the time.  So why make it harder than it already is by putting each other down?  When a mom is shamed, she may doubt and question herself and her parenting decisions.  She may cry.  She may get angry.  She may be embarrassed.  Her postpartum depression may be worsened.  Her negative thoughts about her own body might increase, and she may begin to believe those negative thoughts.  That’s the dark side of mom shaming: you never know how negatively your comments can impact another mom.

I’m not saying that we shouldn’t have opinions about a woman’s parenting decisions.  But if your opinion might be considered even the slightest bit hurtful, or cause another mom to feel shamed?  Well then, you just keep it to yourself.  It really is as simple as that.  And besides, casting judgment and shame says so much more about the person being “The Shamer” than the “Bad Mom” being shamed.  The dark side of mom shaming shouldn’t exist, period.

At the end of the day, I would hazard a guess and say that all moms are simply trying to do their best, and raise their children to become happy and healthy people.  So instead of putting each other down, let’s support each other and show our kids an example of grace and maturity, like the fabulous moms that we all are.

Have you experienced the dark side of mom shaming? Share your stories below.