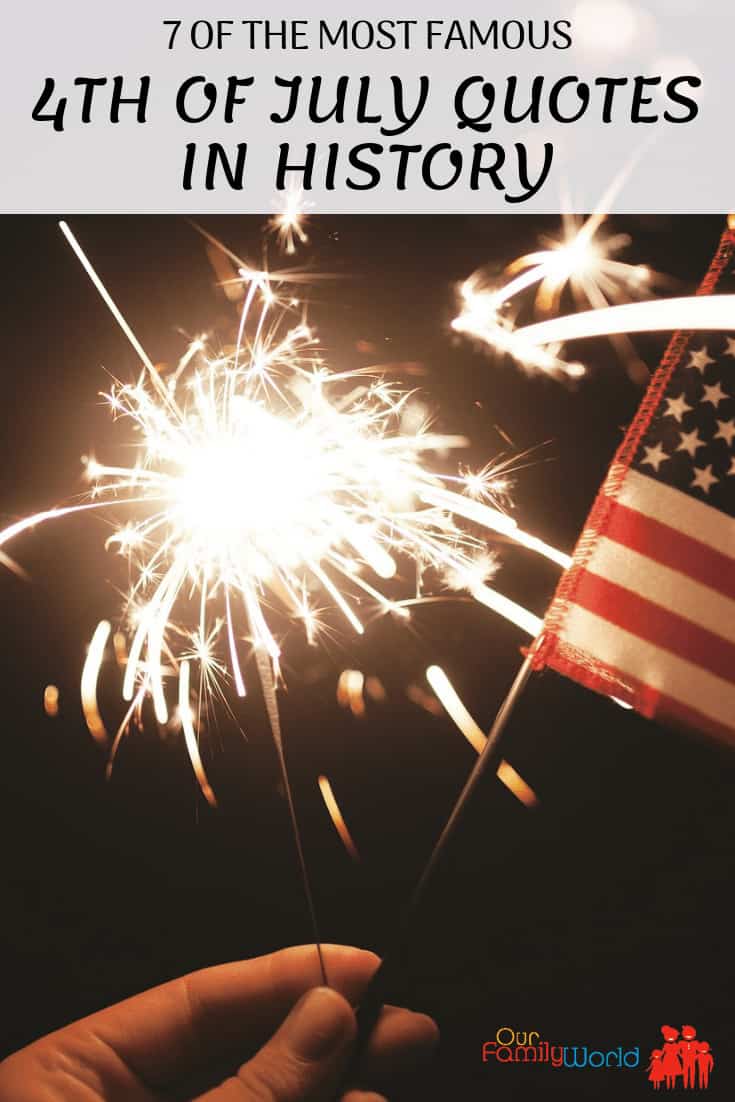 Looking for a few famous 4th of July quotes to help remind you of the true meaning of the holiday? We’ve got you covered with the best patriotic quotes throughout history! The 4th of July is the celebration of the day in 1776 that the Declaration of Independence was signed by 56 members of the Second Continental Congress in Philadelphia, Pennsylvania. It was one of the most important days in United States history. While many of us celebrate the 4th with barbecues and fireworks, we often lose sight of the real meaning of the holiday. Here are some of the most famous 4th of July quotes in history to help remind you of why we celebrate.

Related: Best Family Movies to Watch on the 4th of July

Most Famous 4th of July Quotes in History

“Happily for America, happily, we trust, for the whole human race, they pursued a new and more noble course. They accomplished a revolution which has no parallel in the annals of human society.” James Madison- James Madison was the 4th President of the United States, serving two terms from 1809 to 1817. “In the truest sense, freedom cannot be bestowed; it must be achieved.” Franklin D. Roosevelt- Franklin Delano Roosevelt was the 32nd President of the United States and to date, has been the only United States President that was elected four times.

Related: Best Places in the United States to Celebrate the 4th of July

“I believe in America because we have great dreams, and because we have the opportunity to make those dreams come true.” Wendell L. Wilkie- Wendell Lewis Wilkie was an attorney and he ran for president in 1940, as a Republican candidate. “All great change in America begins at the dinner table.” Ronald Reagan- Ronald Wilson Reagan was the 40th President of the United States, serving two terms from 1981 to 1989.

“Courage, then, my countrymen, our contest is not only whether we shall be free, but whether there shall be left to mankind, an asylum on Earth for civil and religious liberty.” Samuel Adams- Samuel Adams was one of the signers of the Declaration of Independence. He was also a political philosopher and the United States Statesman. “We need an America with the wisdom of experience. But we must not let America grow old in spirit.” Hubert H. Humphrey- Hubert Horatio Humphrey was the 38th Vice President of the United States under President Lyndon B. Johnson, from 1965 to 1969.

Do you have any favorite 4th of July quotes? Tell us in the comments!