While doing research on ovarian cancer and its effect on your ability to get pregnant, I came across a really interesting article on the Huffington Post. A quick summary: an Australian woman lost both of her ovaries due to ovarian cancer. While doctors were removing her second ovary, they preserved some of the cells. Later, after the cancer was under control, they grafted those cells to her abdominal wall! Through the help of IVF, she was able to use those cells to actually get pregnant. It is quite amazing to learn that the cells were able to grow outside their normal environment! 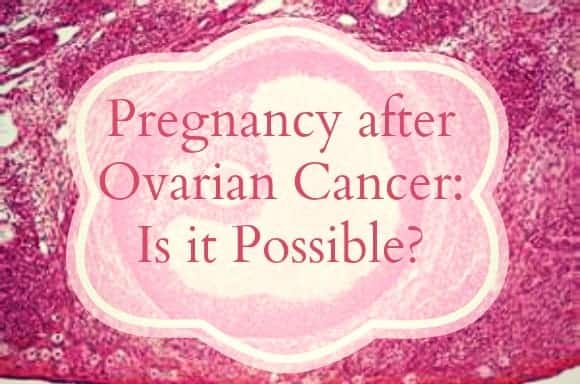 What about those who can’t have such a groundbreaking surgical procedure? Is it possible to get pregnant and start a family after a diagnosis of ovarian cancer? The answer is a bit complex.

What is Ovarian Cancer

Before discussing how ovarian cancer affects your ability to get pregnant, let’s talk a bit about the disease itself. Ovarian cancer is a type of malignant cancer that affects your ovaries. The scariest thing about this type of cancer is that it is often undetected until it spreads throughout your pelvis and abdomen. Once it reaches this point, it becomes more difficult to treat. Sadly, if allowed to reach this stage, it is also often fatal.

Symptoms of ovarian cancer are similar to other common conditions. This makes it easy to mistake them for simple digestive issues. These include:

Do those symptoms sound familiar? They’re pretty much common to just about every type of digestive problem out there! See why it is so difficult to diagnose ovarian cancer early? Right now, I personally have five of those symptoms! They are all related to different issues though.

Any woman can be at risk for ovarian cancer. It seems more common in those who have a family history of cancer. Women who have never been pregnant are also at a higher risk. Ovarian cancer is also more common in women after menopause. A recent study even linked pre-pregnancy drinking to an increased risk of cancer!

Ovarian cancer and its effect on your ability to get pregnant

Now for the big question: can you still get pregnant if you have ovarian cancer? As I said, the answer is a bit complicated. Technically, as long as you have one good ovary producing viable eggs and a uterus to hold your growing baby, there is always a chance that you can get pregnant. Treatment options like chemotherapy can make that incredibly challenging and, in some cases, downright impossible. Still, there have been plenty of cases of women getting pregnant after undergoing chemotherapy.

If ovarian cancer claimed both your ovaries, as the article from the Huffington post proved, it’s still theoretically possible although much more involved than simply timing sex right and hoping for the best. Obviously, if you lost both your ovaries and your uterus to advanced stages of ovarian cancer, then no, you cannot get pregnant.  Your oncologist will be able to give you more information about your chances of getting pregnant after dealing with ovarian cancer.

The big question isn’t so much if you can get pregnant, but should you get pregnant. If you are still dealing with active ovarian cancer, quite honestly, it is likely very dangerous to get pregnant. Between the stress on your body and mind plus the treatment options to deal with the ovarian cancer, your baby could suffer significantly during the pregnancy. It would also be much more trying on your own body.

If your ovarian cancer goes into remission and your doctor gives the okay to try, the question becomes more of an emotional one. The burning question that many women in remission may find themselves asking is: what if it comes back? What if the ovarian cancer returns while you’re pregnant? Or strikes five years down the road and leaves your child motherless? These are incredibly personal questions to consider. Your doctor can offer advice on what will happen if it returns during pregnancy. The other questions are those that only you can answer.

I will say this, though: living your life by “what ifs” is not a healthy way to go. Yes, those who have dealt with ovarian cancer are at a significantly higher risk of dealing with it again. Still, there are so many other “what ifs” to factor in. If we lived our lives based on what could be, we’d never live at all.

What do you think? Did you get pregnant after ovarian cancer? If so, we’d love to hear your story! Would you try if you were in remission and dreamed of having a family? We love hearing from you!

Research sources include: The Mayo Clinic and The Patient Resource.

5 thoughts on “Ovarian Cancer: How Does it Affect Your Dreams of Getting Pregnant?”