Disclosure: I am part of the Fisher-Price Imaginext Blogger Campaign with Mom Central Canada and I receive special perks as part of my affiliation with this group. The opinions on this blog are my own. 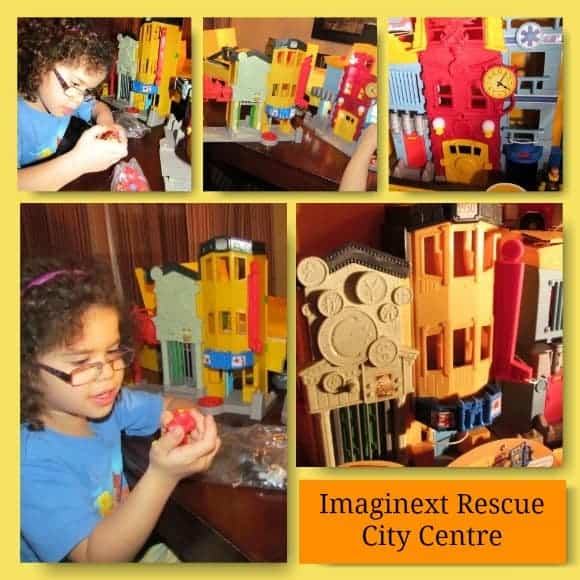 Looking for an awesome gift for kids for the holidays? Read on to discover the magic of Imaginext! Of all the wonderful Fisher-Price toys, Imaginext is definitely my favorite among the playsets. Since my children were little, they’ve enjoyed exciting prehistoric adventures, played the role of dragon trainer, traveled the seven seas in search of treasure and so much more with Imaginext. We have a huge collection of these toys, ranging from the Batman Batcave worthy of the masked crusader himself to medieval castles with princes and princesses. The collection takes up a good part of one room! I’ve always enjoyed listening to my kids create whole scenarios with their characters. As the collection grew, so did their imaginations.

See, all of the Imaginext toys are designed to work with each other. A superhero can step into the role of king of the castle while a pirate can journey back to the age of dinosauts. Each new set opens up a wonderful world of possibilities. The best part is, kids control the action! They aren’t bound by talking characters who can only say and do a few things. The only limitation is their own imagination. I can’t think of a better gift for kids than something that lets their creativity run wild!

Fisher-Price is introducing brand new Ed Venture webisodes showing Ed as a firefighter, a knight and even a dino warrior. Ed Venture follows the spirit of the Imaginext line by showing kids that one person can play many different roles. The webisodes not only inspire kids to come up with new scenarios for their own Imaginext characters, I bet a lot of kids will see some themes they’ve already thought of.

Along with the new Ed Ventures, Imaginext is releasing a brand new fun playset for kids called the Imaginext Rescue City Centre. My daughter had a great time checking out all the cool features! Take a look!

This cool playset features Action Tech™, which responds to different accessories with unique speech and sounds. For example, the included Fire Truck reacts to the technology and unlocks the dispatcher.  Each side of the Centre features a different building that you would find in the city. The left side  is the “working and living” side, with a gas station and bank with a vault that opens and closes, a jewelry store and hotel. Flip it around and the right side features all the rescue necessities, including a fire station, police station and hospital. The police station even has a jail cell with doors that open and close.

Kids can shoot “water” from the firetruck to put out fires in the hotel, put bank robbers on lock-down in jail cell and send their characters on a ride on the working elevator after a hard day working.  The Rescue City Centre really is a whole city! With a hospital, police station, bank and more, it’s one of the most complete Imaginext playsets yet. Best of all, Imaginext really grows with your kids. They can start playing as young as 3, but won’t run out of fun things to do before they reach around age 8 or older!

Check out the Imaginext Contest for a chance to win an Imaginext Gift for Kids prize pack for your family!

Head over to the Imaginext Contest site and enter for a chance to win 1 of 5 $300 Imaginext prize packs! It’s fun to enter.  The Imaginext characters need YOUR help to stop the sun sucker and save Canada. Play the online game to unlock the next phase of the game by solving clues. Solve all nine clues and you’ll be entered to win. Prize packs include:

Do you think the Imaginext Rescue City Centre would make a great gift for kids? What is your favorite feature?