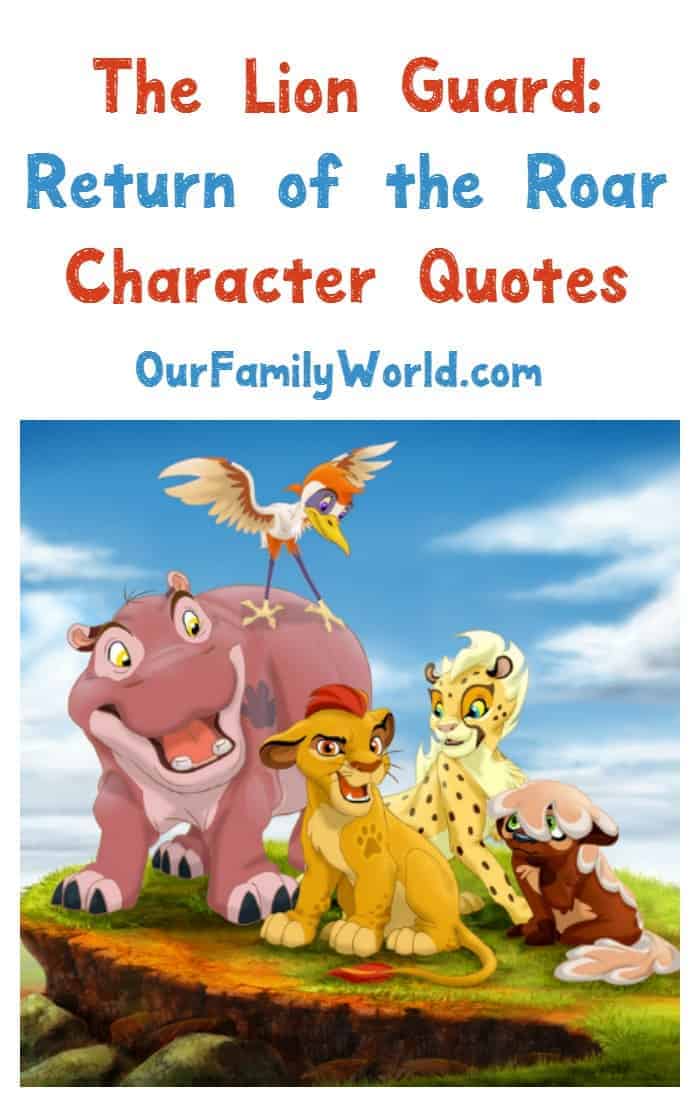 Guess what? Simba is back and he brought along all of his friends in The Lion Guard: Return of the Roar DVD release! We’re sharing some great character quotes to get you roaringly excited about this fun family show! In case you haven’t heard about it, The Lion Guard: Return of the Roar is an animated family adventure television movie that premiered on the Disney Channel on November 22, 2015. Check out the trailer:

The movie is set to be released on DVD by Walt Disney Studios Home Entertainment on February 23, 2016. It takes place in the African Savanna and follows Kion, the 2nd born cub of Simba and Nala, as he puts together the Lion Guard to stop a group of hyenas. The Lion Guard includes Fuli, a cheetah; Beshte, a hippo and Bunga, a honey badger. Here are some movie quotes from some of the movie characters.

The Lion Guard: Return of the Roar Character Quotes

Kion, the main character and son of Nala and Simba

“Hyenas! Put Bunga down! Pick on somebody your own size!”

A pair of hyenas, Cheezi and Chungu, try to kidnap Bunga, a honey badger, at the request of Janja, the leader of the hyenas.

“We’re the Lion Guard, Janja. We defend the Circle of Life.”

The Circle of Life is an ideology held by the Pride Lands members. It is designed to ensure all members live in harmony and do not take more than what they need to survive.

Simba, father to Kion (and main character from The Lion King)

“Everything the light touches is part of our kingdom. The Pride Lands. Ruling is a big responsibility, Kiara.”

Simba is atop Pride Rock, teaching his daughter, Kiara, about ruling the kingdom when she grows up to become queen.

“Yes. Kion is ready. It is time. Time for the Lion Guard.”

Simba, Nala and Rafiki hear Kion’s roar, the Roar of the Elders, an intense and powerful roar that is bestowed to the Lion Guard leader.

“That was Kion’s roar?” Asking Rafiki.

Nala is shocked when she hears her son, Kion’s roar for the first time.

“You think you’re something special just because you can roar?”

Fuli is chosen to be a member of the Lion Guard because of her speed. But, she is curious as to who the fiercest member is. She asks Kion and he responds that he is.

“I don’t get it. They’ve already scored a couple gazelles. That should be plenty for all of them.”

Beshte is watching some hyenas as they attack a group of gazelles and is confused as to why the hyenas are still attacking the gazelles.

Bunga explains to Tiifu and Zuri, lioness cubs, that Lion Guard is like Zuka Zama. Tiifu asks Bunga what Zuka Zama is. Bunga’s reply? He sings a song called Zuka Zama to explain it.

Have you seen this show? Are you excited for the Lion Guard: Return of the Roar DVD release? Share your favorite characters in the comments!