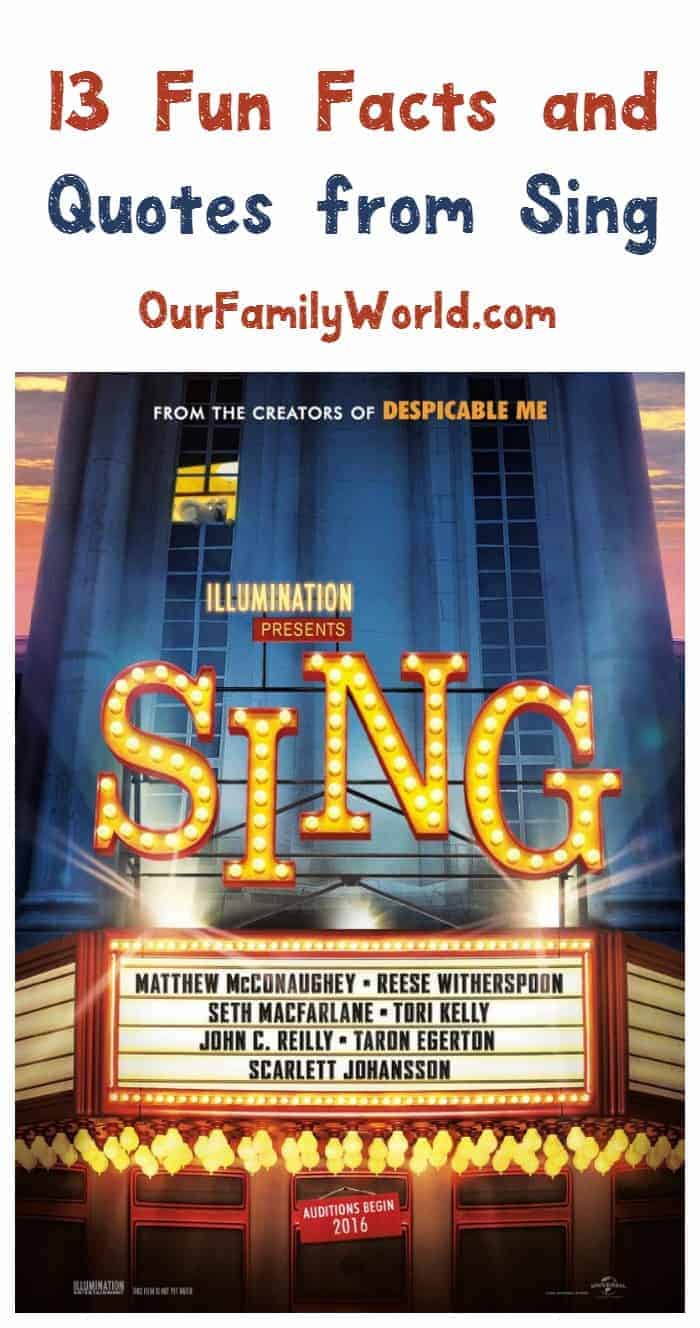 Looking for some fun Sing movie quotes and trivia? We have you covered! We’re really looking forward to this sweet computer-animated family movie about Buster, a koala who is trying to save his theater from being shut down. The film releases on December 21, just in time for the holiday season! Judging by the trailer, it looks like it’s going to be a fun movie for fans of musicals! My kids are really looking forward to seeing it! Check out the trailer, then read on for some fun Sing movie quotes and trivia facts!

Sing tells the story of Buster Moon, a koala who is trying to save his theater from being shut down. He and his friend, Eddie, a sheep, decide to have a singing competition. The competitors include Rosita and Gunther, a pig duo; Mike, a white mouse; Ash, a porcupine; Meena, an elephant and Johnny, a gorilla. Here are some trivia and quotes from the movie Sing.

Conversation between Buster Moon and Eddie:

Buster- “My theater has been going through some pretty rough times lately, so what do I do?”

Buster- “No. My next show is going to be, drumroll please… A singing competition! Just think your neighbor, the, the grocery store manager, that chicken, right there! Real talent from real life.”

Conversation between Gunter and Rosita:

Gunter- “You can’t just sing it; you’ve got to show the fire of desire!”

Rosita- “The fire went out a long time ago.”

Conversation between Meena and her grandpa:

Grandpa- “If I had a voice like Meena’s I’d be a superstar by now! Just singing, ooh, yeah, happy, ooh, yeah!”

Meena- “Sure you would, Grandpa. Now blow out your candles.”

Conversation between Johnny and Miss Crawl, as Johnny hits the piano keys in frustration:

Johnny- “I could really use some extra piano lessons.”

We’ll update this with even more Sing movie quotes once the film releases. In the meantime, these should get you pretty excited about the musical! Remember, it releases on December 21st, just in time for the holidays!

Have you heard any fun Sing movie quotes or trivia tidbits? Will you be seeing this film with your family? Share in the comments!