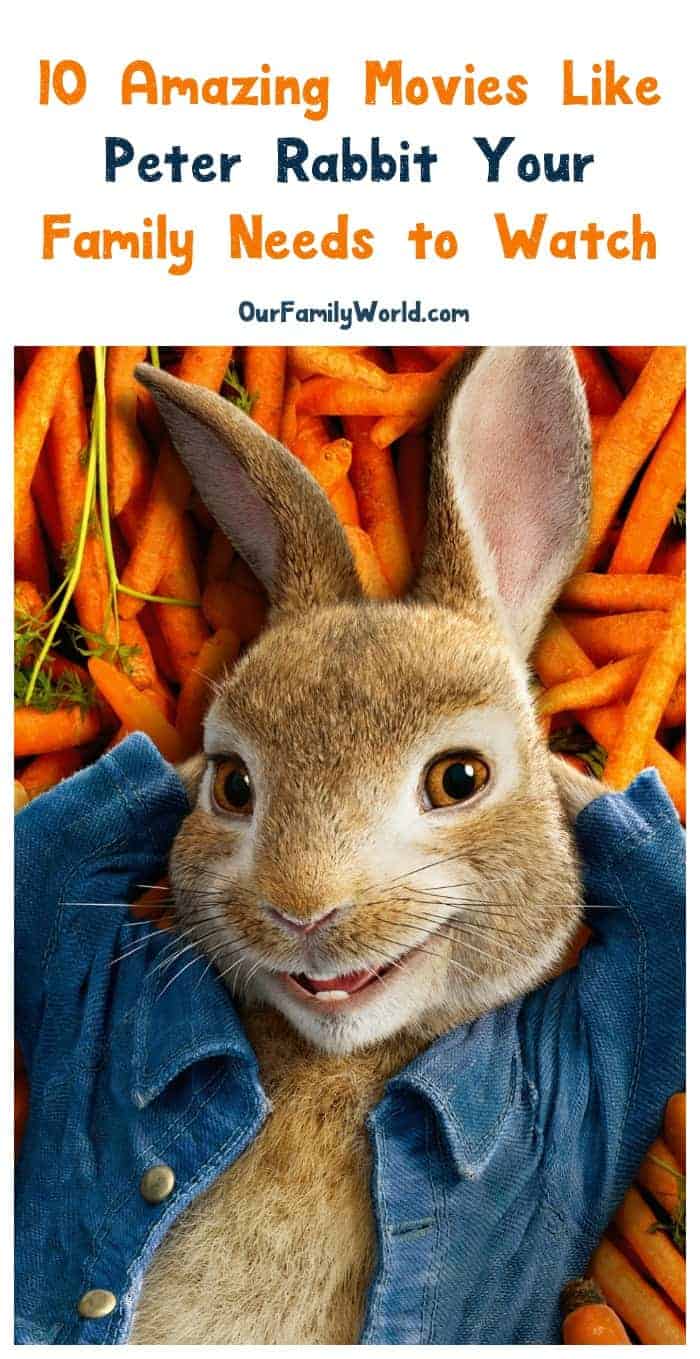 The other day, we shared some of our favorite Peter Rabbit movie quotes and trivia to get you excited about this awesome family film.

Maybe we got a little too excited, because now we just can’t wait for the movie to come out!

Now we need to find some movies like it to hold us over!

If your kids are in the same boat, read on for some of my favorite movies featuring bunnies and other fun talking animals!

Affiliate links included below. If you make a purchase through these links, we earn a small commission at no extra charge to you.

Peter Rabbit is a live-action/animated movie with lots of adventure and comedy. It is set to release into theaters on February 9, 2018. Check out the trailer, then keep reading for our favorite movies like Peter Rabbit.

Who Framed Roger Rabbit is a 1988 live-action/animated, fantasy movie that is based on the 1981 novel- Who Censored Roger Rabbit- by Gary K. Wolf. Eddie Valiant, a private investigator, is tasked with trying to prove Roger Rabbit’s innocence, after he is accused of murdering Marvin Acme, a wealthy businessman.

The movie stars Bob Hoskins, along with the voices of Charles Fleischer and Stubby Kaye, and is one of our favorite movies like Peter Rabbit for older kids to watch.

Space Jam is a 1996 live-action/animated, sports, comedy movie. The Looney Tunes characters seek out the help of Michael Jordan, a retired basketball star, to help them win a basketball game against a team of aliens. The movie stars Michael Jordan, along with the voices of Billy West, Dee Bradley, Bob Bergen and Bill Farmer.

has the largest following, especially now that the long-awaited sequel is finally in the works!

3. Home on the Range

Home on the Range is a 2004 animated, western, comedy movie. Three mismatched dairy cows- Maggie, Grace and Mrs. Calloway- must capture Alameda Slim, a cattle rustler, so they can save their farm. The trio of cows get help from Buck the Horse, Lucky Jack the Rabbit and Rico the Bounty Hunter.

. When January Q. Irontail loses the role for the newest Easter Bunny, to Peter Cottontail, he devises an evil plan to cast revenge.

The movie features the voices of Roger Moore and Tom Kenny.

5. Wallace & Gromit: The Curse of the Were Rabbit

Wallace & Gromit: The Curse of the Were Rabbit

is a 2005 stop-motion/animated, horror, comedy, mystery movie. Wallace, an eccentric inventor and Gromit, his smart, mute dog, set out to discover why a group of rabbits are destroying gardens in their village.

The movie features the voice of Peter Sallis.

is a 2011 live-action/computer-animated, family, comedy movie. E.B., the son of the Easter Bunny, doesn’t want to take his father’s place, but instead wants to be a drummer in a band, while Carlos, the evil leader of the Easter Chicks, plans to take over the Easter Organization.

Winnie the Pooh is a 2011 animated, musical movie that is the 5th film in the Winnie the Pooh film franchise, with the previous 4 being- the 1977- The Many Adventures of Winnie the Pooh, the 2000- The Tigger Movie, the 2003- Piglet’s Big Movie and the 2005- Pooh’s Heffalump Movie. Winnie the Pooh and his friends- Eeyore, Kanga, Owl, Piglet, Rabbit and Tigger- set out on a journey to save Christopher Robin from an unknown monster.

Ice Age: Continental Drift is a 2012 computer-animated, comedy, adventure movie that is the 4th movie, in a series of 5, that make up the Ice Age film franchise. It is the sequel to the 2002- Ice Age, the 2006- Ice Age: The Meltdown and the 2009- Ice Age: Dawn of the Dinosaurs and is the prequel to the 2016- Ice Age: Collision Course. Manny, Sid and Diego embark on an iceberg adventure, causing them to face Captain Gutt and his gang of pirates.

9. Rise of the Guardians

Rise of the Guardians is a 2012 computer-animated, fantasy movie that is based on the book series- The Guardians of Childhood- by William Joyce. A team of Immortal Guardians- Easter Bunny, Sandman, Santa Claus and Tooth Fairy- seek out help from Jack Frost, the Spirit of Winter, to battle Pitch Black, an Evil Spirit.

Zootopia is a 2016 computer-animated, comedy movie. The unique, odd team of Officer Judy Hopps, a rabbit and Nick Wilde, a con artist red fox, who uncover a conspiracy in their city of anthropomorphic animals. The movie features the voices of Ginnifer Goodwin and Jason Bateman.

Check out our yummy Zootopia Paw-sicles to eat while watching this one!

These are just a few of our favorite movies like Peter Rabbit starring hilariously adorable talking animals (especially bunnies!). They should hold you over until the movie releases into theaters!

What are your favorite movies like Peter Rabbit? Tell me below!