Paddington 2: Want to learn fun facts & discover movies like this flick? You came to the right place. I compiled a list of fun facts about this film as well as a list of movies that have similar plotlines. Check out our picks for the top ten most darling flicks to add to your watch list! 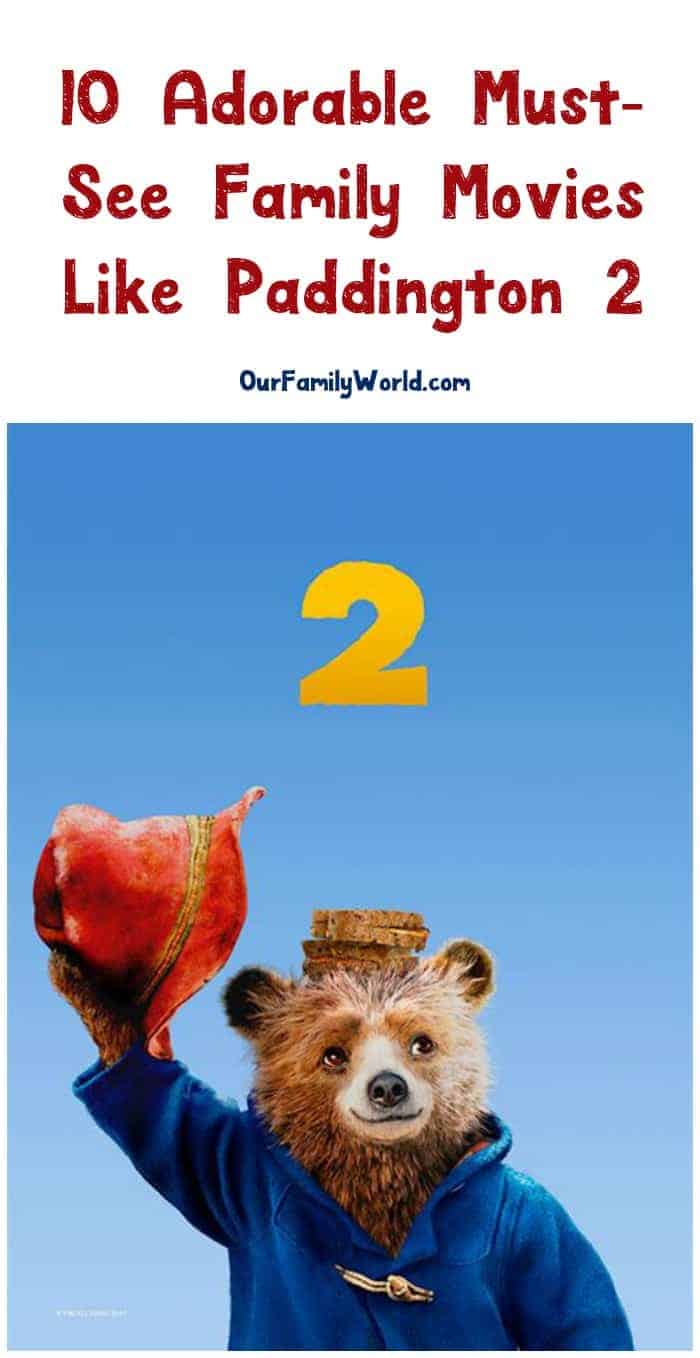 Paddington 2 is a live-action, CGI-animated, adventure, comedy movie, set to be released in theaters on January 12, 2018 and is, obviously, the sequel to the first movie, released in 2014. If you’ve never heard of Paddington Bear, he’s a fictional character who has been featured in over 150 books, since 1958, by Michael Bond. In the sequel, Paddington is all settled in with the Brown family. He’s become quite the popular member of the local community! When he wants to buy a gift for his Aunt Lucy’s 100th birthday, he takes a bunch of odd jobs to raise the money. He makes enough to buy the gift, only to have it stolen!

After you see the movie (or while you’re waiting to hit the theaters), your kids will definitely be in the mood to watch more fun-loving animals on crazy adventures. We’ve got you covered! Here are ten more adorable movies like Paddington 2 that you can watch right now!

Adorable Movies Like Paddington 2 That You Can Watch Right Now

Affiliate links included below. If you make a purchase through these links, we earn a small commission at no extra charge to you. Thank you for your support! We’ll note which movies like Paddington 2 you can find on Netflix.

are a former country-rock band of bears. The Country Bears features the voice cast of Haley Joel Osment, Diedrich Bader and Brad Garrett, as well as the live-action cast including Alex Rocco, Christopher Walken and Daryl Mitchell.

Brother Bear is a 2003 animated, comedy, drama movie that is the prequel to the 2006 movie- Brother Bear 2. The movie focuses on Kenai, a young Inuit boy, who is transformed into a bear, after he kills one unnecessarily. Brother Bear features the voice of Joaquin Phoenix. Find this one streaming on Netflix.

Flushed Away is a 2006 computer-animated, action, adventure, comedy movie. The movie tells the tale of Roddy St. James, a spoiled rat who is flushed into the city sewers, where he learns a different lifestyle. Flushed Away features the voice of Hugh Jackman.

is a 2006 computer-animated, buddy, comedy movie that is the 1st movie in a series of 4 movies- Open Season 2 (2008), Open Season 3 (2010) and Open Season: Scared Silly (2015). The movie tells the story of Boog, a bear and Elliot, a deer, who team up with a host of other forest animals to fight off hunters. Open Season features the voices of Martin Lawrence and Ashton Kutcher. Find the first one on Amazon with a subscription to Starz (Join Amazon Channels Free Trial), rent the second and third one through Amazon, and watch Scared Silly streaming on Netflix.

is a 2008 computer-animated, action, comedy, martial arts movie and is followed by 2 movie sequels- Kung Fu Panda 2 (2011) and Kung Fu Panda 3 (2016). The movie features the tale of Po, a clumsy panda bear, who becomes an unlikely hero when he is chosen to defeat the enemy. Kung Fu Panda features the voice of Jack Black. All of the Kung Fu Panda movies are available to stream on Netflix.

Yogi Bear is probably one of my top 3 favorite movies like Paddington 2 because I grew up watching the original cartoons. It is a 2010 live-action/computer-animated, family, comedy movie that is based on the animated television series, of the same name, that aired in syndication, from January 30, 1961 to January 6, 1962. The movie focuses on Yogi Bear and his famous sidekick, Boo-Boo, as they try to save Jellystone Park from being shut down. Yogi Bear

features the voice cast of Dan Aykroyd and Justin Timberlake.

is a 2012 computer-animated, fantasy movie. The movie tells the story of Princess Merida, who causes havoc in her kingdom, when she chooses her own path in life. If you’re thinking “what does that have to do with bears?” you just have to watch the movie to find out! Brave features the voice of Kelly Macdonald. I’ve always thought that Brave was among the most original of all the Disney Princess movies.

is a 2014 computer-animated, heist, comedy movie that is the prequel to the 2017 movie- The Nut Job 2: Nutty by Nature. The movie showcases Surly, a purple squirrel; Buddy, a rat; Raccoon, a raccoon; Andie and Grayson, squirrels and Mole, a mole, who decide to raid Maury’s Nut Shop, to stock up for the cold winter, only to discover it’s a criminal hideout for a gang of bank robbers. The Nut Job features the voices of Will Arnett, Liam Neeson, Katherine Heigl, Brendan Fraser and Jeff Dunham. This one is included with your Prime Video membership.

9. Norm of the North

Norm of the North is a 2016 computer-animated, comedy, adventure movie. The movie tells the story of Norm, a polar bear, who becomes a corporation mascot, in an attempt to save his Arctic homeland. While it didn’t get the best reviews from critics, it’s actually a really fun family movie with a great underlying message about saving the environment. Norm of the North features the voice of Rob Schneider. Watch this one on Prime!

Of all the movies like Paddington 2, this one has to be my #1 favorite. While I adored the animated version as a kid, the live-action remake is absolutely stunning. If you haven’t heard of it, The Jungle Book is a 2016 fantasy, adventure movie that was inspired by the 1967 animated movie, of the same name. The movie showcases the tale of Mowgli, a boy-cub, who sets out on a journey of self-discovery, along with Bagheera, a black panther and Baloo, a sloth bear. The Jungle Book features Neel Sethi as Mowgli and also features the voices of Ben Kingsley and Bill Murray. The Jungle Book is streaming on Netflix.

All of these movies like Paddington 2 feature animals that face tremendous odds or go on exciting adventures, and they’re all incredibly fun to watch for the entire family! So pop that popcorn, snuggle up in those comfy blankets, and get ready for a fun family movie night!

Do you have any other favorite movies like Paddington 2? Tell us below!