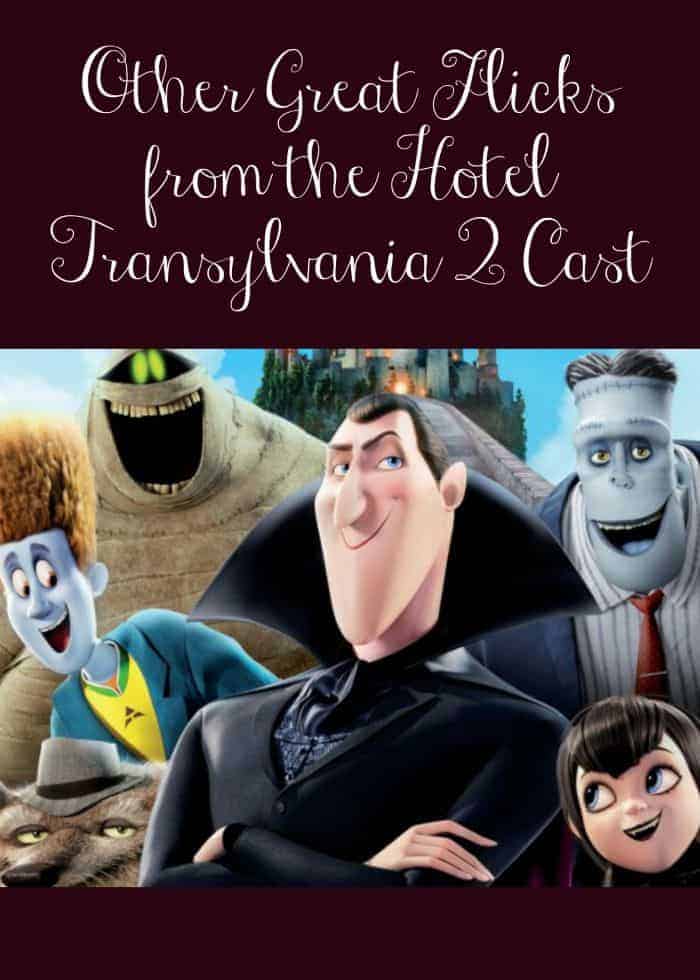 Other Movies the Cast of Hotel Transylvania 2 Have Played In

Adam Sandler made his film debut in 1989 as Schecky Moskowitz in the movie, Going Overboard. Since then, he has starred in more than 50 films, mostly in the comedy genre. No one could possibly forget Billy Madison, the man-boy forced to go through K-12 to prove he’s grown up enough to handle a company. Or how about Happy Gilmore, the angry hockey aficionado who turned golf pro to save his grandmother’s house?  He has also starred in Big Daddy in 1999 as Sonny Koufax, 50 First Dates in 2004 as Henry Roth, Bedtime Stories in 2008 as Skeeter Bronson and Blended in 2014 as Jim Friedman.

Andy Samberg made his film debut in 2007 in the movie Hot Rod, playing the role of Rod Kimble. He has starred in several other movies since then including I Love You Man as Robbie Klaven in 2009, Friends with Benefits as Quincy in 2001, Grown Ups 2 as a male cheerleader in 2013 and Neighbors as Toga #1 in 2014.

Selena Gomez made her film debut in 2003, playing the role of a waterpark girl in the movie Spy Kids 3D: Game Over. She played the voice of Helga in the 2008 movie Horton Hears a Who, the role of Faith in the 2012 movie Spring Breakers and the role of Nina Pennington in the 2014 film Behaving Badly.

Kevin James is well-known for his comedy roles both on television and film. He played the voice of Mangiafuoco in the 2002 Pinocchio, the role of a fireman in 2004’s 50 First Dates, the role of Albert Brennaman in 2005’s movie Hitch, Paul Blart in the 2009 movie Paul Blart: Mall Cop and as Griffin Keyes in the 2011 film Zookeeper.

Keegan-Michael Key first played the role of a new dad in Due Date in 2010 and has had several other roles along the way. He played in Just Go With It in 2011 as Ernesto, The Lego Movie in 2014 as the voice of Frank the Foreman and Tomorrowland in 2015 as Hugo.

Mel Brooks has had a successful movie career since 1963 when he was the voice of the narrator in The Critic.  You could say he was made for his role in Transylvania, he did direct  Young Frankenstein, after all! He also played Professor Max Krassman in the 1979 hit The Muppet Movie as well as President Skrods in Spaceballs in 1987, Jake Gordon in Screw Loose in 199 and the voice of Bigweld in Robots in 2005.

Steve Buscemi has played numerous roles since his debut as Willy/Raphael in the 1985 movie The Way It Is. In 1992, he was in Reservoir Dogs as Mr. Pink, in 1997 he was in Con Air as Garland Greene, in 2001 he was the voice of Randall Boggs in Monster Inc. and in 2010, he played the role of Wiley in Grown Ups.

Molly Shannon made her film debut in 1989 as Meg in Phantom of the Opera. She has also played the role of Anita Olesky in Never Been Kissed in 1999, Tracy in The Santa Clause 2 in 2002, Melody Tiara in Bad Teacher in 2011 and Heather Daltry in Scary Movie 5 in 2013.

Which of these favorite other movies the cast of Hotel Transylvania 2 have played in do you love most? Tell us in the comments!