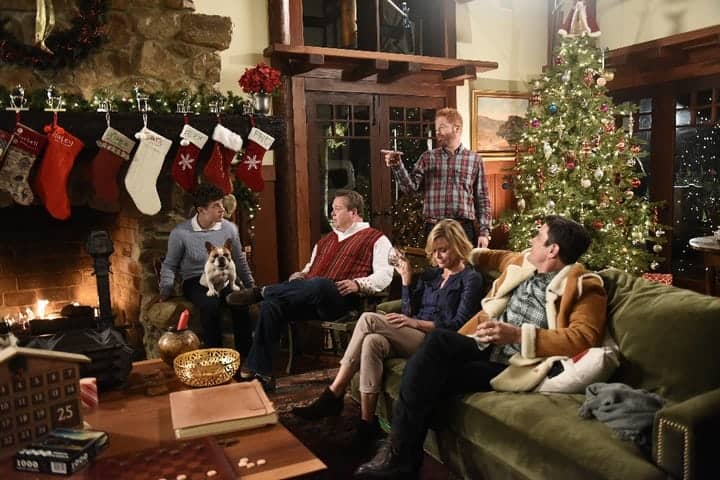 Yesterday’s episode of Modern Family (season 7, episode 9) is the last new episode until after the holidays. New episodes return on Wednesday, January 6, 2016. In this White Christmas episode, Gloria decides to take charge of the family by ensuring everyone spend time together for Christmas by booking a cabin in the woods. There were quite a few different subplots in this episode. It was a bit much if you ask me.

Haley and Andy- Yes, Hayley and Andy are a couple once again. They talked about the sexual tension between them and decided to move forward in a relationship. While Hayley and Andy are together again, they do have some unresolved issues that they will need to address sometime…and sometime soon!

Jay- Jay gave a speech stating that if anything were to happen to him, Chuck Finney would be the best person to lead the company. This made Claire upset of course. However, he just wanted to be sure that Claire wanted to be CEO of the closet company. Jay ends up giving Claire an early Christmas present: business cards listing her as CEO of the company.

Gloria– Gloria was excited for Joe to see his first snow. However, the weather turned out to be much warmer than normal. A lady showed up at the cabin, asking for the cabin owners. Gloria told them they rented the cabin for the family. She invited her to spend Christmas with them. Turns out the lady is an astrophysicist.

Phil– Phil gave Andy a gold blazer for Christmas and the two of them bonded again.

Lily- Lily found a locked door and asked Luke and Manuel what was in there. The boys tried to scare her by telling her a story of a kid that was locked in the room and just left there. When she hears noises coming from the room, she screams, prompting everyone to run upstairs. When they opened the door, Andy and Hayley were putting their clothes back on.

Beth– Beth shows up at the cabin to tell Andy she has found someone new. He was upset, feeling betrayed but doesn’t tell her and Hayley.

Did you catch on last night’s episode of Modern Family- White Christmas? What was your favorite moment?