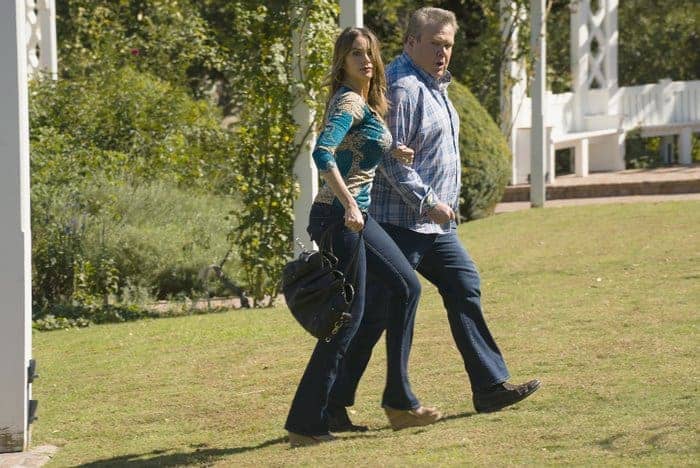 Did you miss last night’s Modern Family  Season 7 Episode 11 episode? Get caught up with our recap of “Spread Your Wings!” In the episode, we see Claire and the kids trying to help the ducklings leave the nest while Phil is off visiting Alex at college. Jay also helps Mitch with Lily’s sleepover; and Gloria and Cam are off on a hot pepper heist.

Related: Modern Family Returns: Find Out What Happened in “Playdates”

The episode starts with Claire, Haley and Luke attempting to get rid of the ducks by leaving them at a nearby park. The trio has had enough of the ducks just walking around their house. However, after Claire opens their cage to take them out, she starts thinking about the cute ducks when they were little. She also realizes that each of the ducks resembles one of each of her children. Phil is not happy when he gets home and realizes the ducks are gone.

Phil heads to Caltech to see Alex. He dresses up to look like Bill Nye the Science Guy. However, a science guy he is not. Things get crazy in the robotics lab when Phil turns the on switch on all of the robots by accident. Afterwards, Alex tells her father that she doesn’t want to live on campus any longer and she wants to move back home and commute to school. Phil notices that she is a bit anxious and Alex finally tells him that she doesn’t think she fits in with her peers.

Later, Phil talks to Alex again, telling her how each college student will have a different experience but he is her father and just wants to ensure that she is giving it all she has. Before he leaves, he gives her a package that she thinks is the headphones she wanted. Instead, she discovers he has given her items she needs to take part in a freshman tradition at the college: a gown and goggles. Alex wears these items to the tradition and receives cheers from her peers.

When Phil arrives home, he is upset with Claire for releasing the ducks but then realizes that it was the best thing for them. He looks back on his day with Alex and realizes that the ducks need to be on their own.

Cam tells Gloria some good news and some bad news. The good news is that her hot sauce recipe has been accepted by Granddaddy’s Holiday Gift Baskets but the bad news is that they need to have a lot of sauce made, using blood peppers.

Meanwhile, Manny is out to prove that he isn’t always a good boy. He devises a plan to get his mother and Cam into an area of the Botanical Garden this is restricted in order to obtain the blood peppers. The plan works, they get the blood peppers and all the needed sauce is made.

However, things go sour fast when Cam has an idea for labels for their sauce that features a lot of him but very little of Gloria. Gloria is not happy with this and wants to dissolve their partnership but they later reconcile. Now the problem is that while the sauce is all made, they need help jarring the sauce.

Mitch and the Epic Sleepover Fail

Lily is having a sleepover and Mitch is attempting to be the cool dad. However, he fails miserably when he ends up offending one of the parents, who is Vietnamese, with a crude joke. Jay arrives at the house and advises Mitch to get the group tired out so they will all fall asleep quickly. Jay plays an old Jane Fonda workout tape to get the girls tuckered out. However, this attempt fails so he comes up with another solution: jarring the hot sauce.

An assembly line is set up, the girls put on hair nets and Jay instructs them on how to bottle the sauce. The mother than Mitch offended earlier returns and is flabbergasted by what is going on. Mitch tries to explain things to her. But the attempt works and the girls get tired and head to bed.

Did you catch Modern Family Season 7 Episode 11: Spread Your Wings? What were your favorite moments from the show?