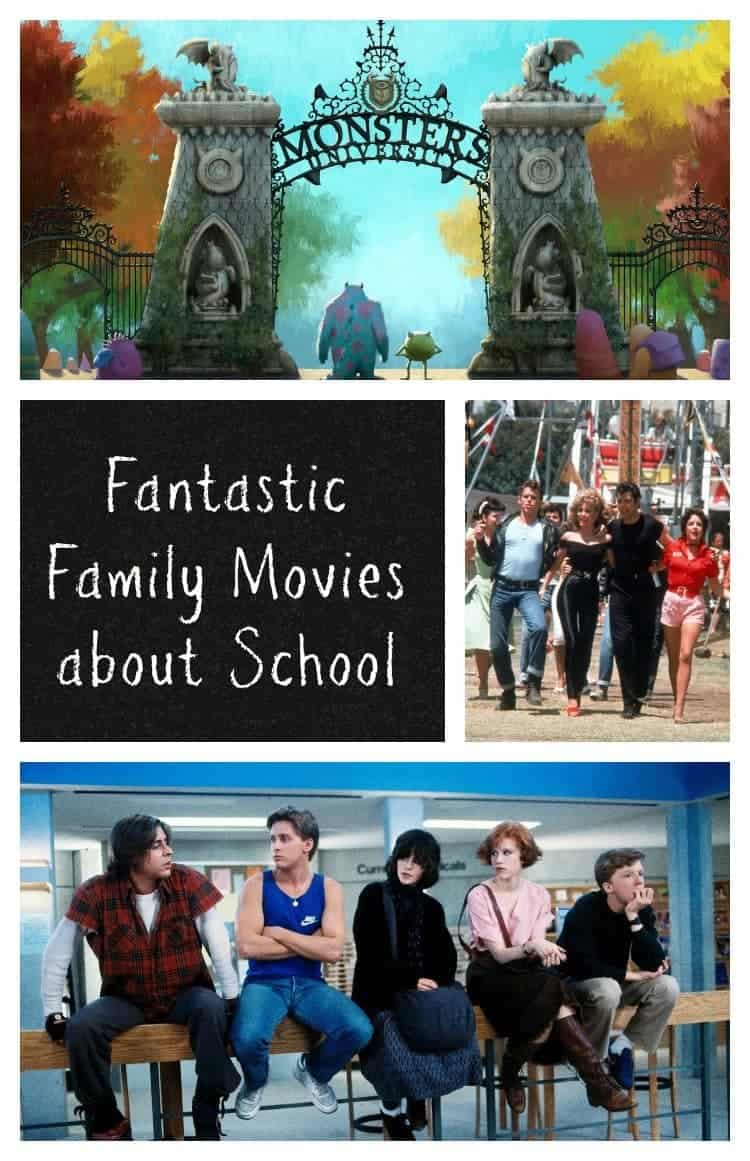 Watching good family movies about school together can be a great way to get kids ready for their first day back, explore different themes in a relatable way with your teenager or even just reminiscence with your kids about your glory days. There are tons of school-related movies out there, as at least half the movies with kids ages 5-18 take place in the hallways between classes, if you’ve noticed. The other half, of course, take place during summer. The point is, there’s no shortage of good family movies about school! Check out a few of our favorites!

The Breakfast Club is a 1985 coming-of-age comedy-drama movie that stars Emilio Estevez, Paul Gleason, Anthony Michael Hall, John Kapelos, Judd Nelson, Molly Ringwald and Ally Sheedy. Five students are spending an entire Saturday in detention. Claire is known as the princess, Andrew the jock, John the criminal, Brian the nerd and Allison the basket case. At the beginning of detention, these five students had nothing in common. When principal Vernon makes them write an essay detailing who they think they are, the five students bond and realize they have more in common than they realize.

What makes The Breakfast Club such a good family movie about school is that it really encompasses so many themes that haven’t changed much over the last 30 years. This is a great movie to watch with your teen to open up conversations about everything from bullying to drugs. When it’s over, you and your teen can talk about the underlying essay theme behind the movie. What would they write? Who do they think they are? Where do they see themselves in their own school’s clique-based society? Also, if you’re uncomfortable with a few bad words in the original version, you can always catch one of the edited (albeit awkwardly and somewhat hysterically) versions on television. The movie frequently plays on different cable channels.

Grease is a 1978 musical romantic comedy-drama film that is based on the 1971 musical of the same name by Jim Jacobs and Warren Casey, with a sequel Grease 2 in 1982. The movie stars John Travolta, Olivia Newton-John, Stockard Channing, Jeff Conaway, Barry Pearl, Didi Conn and Kelly Ward. Sandy and Danny meet one summer at the beach and enjoy a summer romance. Sandy is from Australia and is a good girl while Danny is the head of a leather clad gang. That school year, Sandy attends the same high school as Danny when her parents decide to live in the states. Sandy soon discovers that Danny at school is not the same Danny she fell in love with over the summer. Does Sandy get rid of her good girl image to attract Danny?

Grease is one of the best family movies about school for parents to watch with teens because it’s a bit, for lack of a better word, cleaner than The Breakfast Club, yet still hits on some really great themes. The biggest theme: Sandy’s transformation from good girl to a 1950s version of a rocker chic, all in the name of getting Danny to like her again. This opens up fantastic opportunities to talk about being yourself, the temptation to change for others, peer pressure and, most important of all, how to avoid breaking into choreographed song numbers in the middle of the street. Just kidding on that last one!

Monsters University is a 2013 3D computer animated comedy movie is a prequel to the 2001 movie, Monsters Inc. It showcases the voices of Billy Crystal, John Goodman, Steve Buscemi, Helen Mirren, Bob Peterson, John Ratzenberger, Sean Hayes, Alfred Molina and Nathan Fillion. Mike is a first-year student at Monsters University where he meets Sulley, a privileged monster that doesn’t have to work hard to scare anyone. Mike has to work hard at the university but even with all that hard work, he still isn’t scary enough. Ever since he was a kid, Mike has wanted to scare people. At the university, Mike and Sulley engage in an intense rivalry that ends up with both monsters being booted from the Scare Program at the university. To make things right, Mike, Sulley and some other unique monsters need to learn how to make things work together.

A little something for the younger kids, Monsters University may be a family movie about monsters in college, but the themes apply to kids in any grade. Themes to discuss after watching Monsters U include the benefits of hard work, friendship, and teamwork. Monsters Inc and Monsters University are great movies to help kids get over fears as well since it shows that even monsters are afraid of something!

These are just a few good family movies about school and how you can use them to launch great discussions with your kids. Movies are entertaining and fun, but they can also be incredibly useful parenting tools!

Do you have any favorite good family movies about school? Share them in the comments!