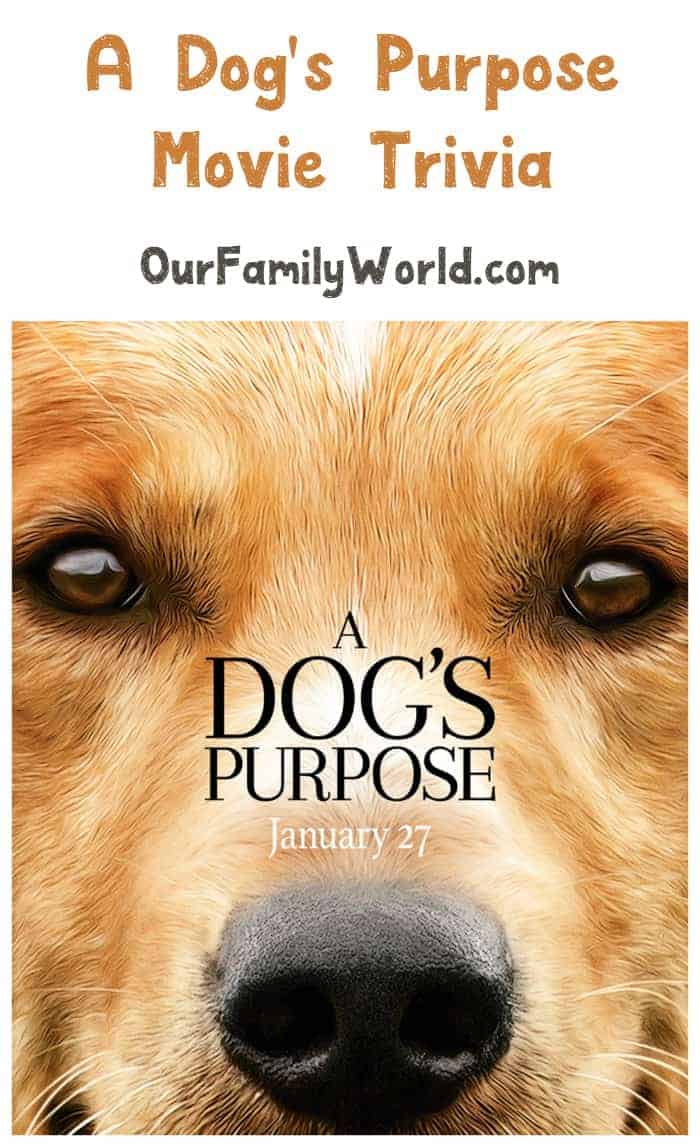 Looking for A Dog’s Purpose movie trivia? As always, we have you covered! This upcoming family movie releases into theaters on January 27, 2017. It follows the story of a dog who looks for purpose through different owners throughout four lifetimes. I love watching movies about animals, so I’m definitely planning to see this one! Since it’s billed as a comedy-drama, I imagine that it’s going to have plenty of hilarious moments as well as a few tear-jerking scenes. Check out some of my favorite trivia from A Dog’s Purpose!

Related –> The Secret Life of Pets Movie Trivia and Quotes

A Dog’s Purpose is  based on the 2010 book of the same name by W. Bruce Cameron.

Lasse Hallstrom is a Swedish movie director and director of this film. Here are some other popular movies he has directed in the past:1993- What’s Eating Gilbert Grape

The movie trailer for A Dog’s Purpose was released on Friday, August 26, 2016. So, why that date? Because that was National Dog Appreciation Day.

On August 10, 2015, the Dream Works Pictures posted an open casting call for the movie through the website Project Casting. They were in search of extras to be in the movie, to be paid at $11.75 an hour.

Josh Gad, who provides the voice of Bailey, has appeared in the main voice cast of 4 other movies. Those movies are:

There are 2 actors that play the younger version of Ethan in A Dog’s Purpose. Bryce Gheisar is an actor from Winnipeg, Canada, born on December 22, 2004. He made his acting debut in the 2015 short film The Bus Stop where he played the role of Elijah Gutnick. KJ Apa is an actor from Auckland, New Zealand, born June 16, 1997. He is best known for playing the role of Kane Jenkins on the television series Shortland Street from 2013 to 2015.

Dennis Quaid plays the adult version of Ethan in the movie. Quaid has been starring in movie roles since 1977. He has had several well-known roles throughout the years. Here are just some of those famous roles:

Did these A Dog’s Purpose trivia facts get you excited about seeing this awesome family movie? Share your thoughts in the comments.