My family loves these movies like Isle of Dogs! I bet yours will too! Check them out and add them to your watch list for the weekend! 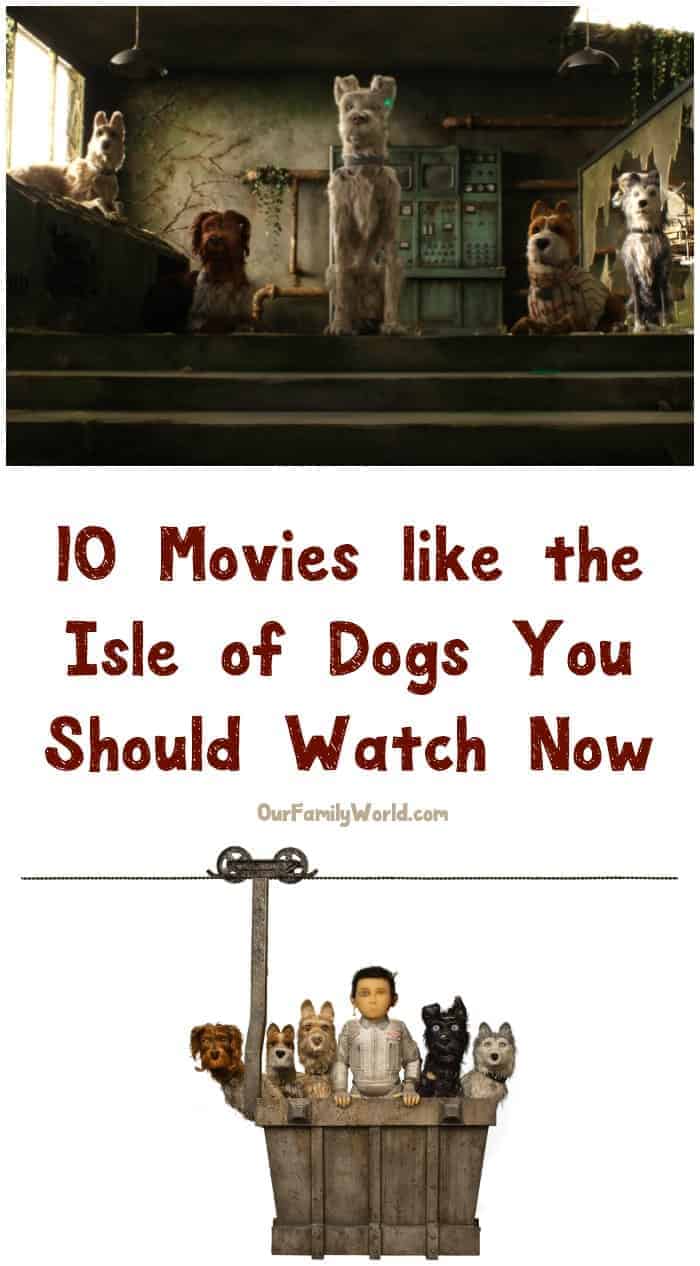 Whether you are a huge fan of director Wes Anderson like I am or you just adore animated movies, the Isle of Dogs will surely hit all the right buttons and leave you looking for more. When that inevitably happens, you should check these movies out because they are very similar to the Isle of Dogs, either in their visual beauty or the adventuristic story.

Check out the Isle of Dogs trailer, then read on for more great movies your family will love!

Affiliate links included below. If you make a purchase through these links, we earn a small commission at no extra charge to you. Thank you for your support!

is Anderson’s first, and before the Isle of Dogs, only animated movie. It is a stunningly attractive adventure that boasts an incredibly talented cast, including George Clooney, Bill Murray, Meryl Streep, Jason Schwartzman, Owen Wilson, Willem Defoe, and many others.

Even though I wanted to keep this list confined to the world of animated movies, I had to include at least one of Anderson’s feature films. Even though most of his movies are so colorful and breathtaking that they seem animated, the obvious choice was Moonrise Kingdom

. Obvious because of the plot where we follow a couple of runaway teenagers and the subsequent search party, much like we follow the search party for Spots in Isle of Dogs. And before we go on with the list, I must advise you to watch as many of Wes Anderson’s movies as you can, especially if you enjoyed the Isle of Dogs.

In the world of the clay animation, one duo takes the win for being the most famous of them all – Wallace and Gromit

. After series of short movies, their first full-length adventure will make you laugh until you cry. This time Wallace, a goofy inventor and his loyal friend Gromit, set out to solve the mystery behind destroyed gardens and stolen vegetables. However, unlike the dogs in the Isle of Dogs, Gromit always remains silent.

Created by the same writer behind Wallace and Gromit, Nick Park, Chicken Run

is another stop-motion classic that even spurred a video game of the same name. The movie follows a group of chicken trying to escape from the farm, and it is a great mix of hilarious and scary.

When it comes to exciting dog adventures, not many movies can beat the classic that is 101 Dalmatians

. While I do realize that there aren’t many people out there who didn’t see this movie, I had to include it in this list. If nothing else, it is a great throwback to some more innocent times that evokes childhood memories. For those of you looking for something more contemporary, you can check out the live remake version.

If you like the “talking dogs” aspect from the Isle of Dogs, then you should love The Secret Life of Pets. It is an extremely funny animated movie that follows the adventure of a group of pets when their owners are not looking, which ends up with a rescue mission that is both exciting and hilarious.

What connects Zootopia and Isle of Dogs are not just the talking animals. Both movies deal with corruption on the highest levels, where mayors of imaginary cities abuse their power to push their own dirty agenda. And they are both visually amazing and funny, of course!

One of Studio Ghibli’s classics, My Neighbor Totoro

is one of the most typical representatives of classic anime movies. And since the Isle of Dogs takes place in Japan, it is obviously influenced by their pop culture and art, with anime being at the top of that list of influences. This movie is as beautiful as they come and follows the adventures of two girls that recently moved to the countryside to stay close to their ill mother and their encounters with weird and wonderful forest spirits.

This is another classic coming from Studio Ghibli and the master of the anime world, Hayao Miyazaki. It is a wonderful story about a 10-year-old girl who wanders into a beautiful fantasy world full of numerous funny and ghostly creatures. This Oscar-winning animation will scare you, make you laugh and amaze you with its visuals and creativity.

Kubo and the Two Strings is an American 3D stop-motion adventure once again set in Japan. It is one of the most emotional animated movies in recent years and creates a wonderful fantasy world filled with ghosts, talking monkeys and much more. And if you want more of the same, check out other movies made by Laika Studios, like Coraline, Boxtrolls and ParaNorman.

Of course, there are a lot of amazing animated flicks, but if you want more movies like Isle of Dogs, you will certainly enjoy the these.

Do you have any other favorite movies like Isle of Dogs? Tell us below!