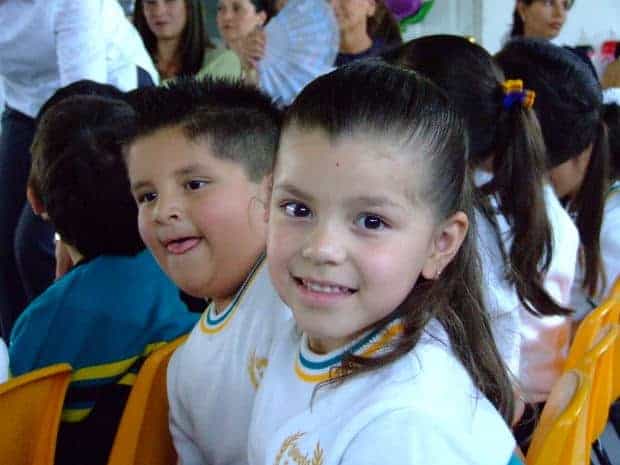 Childhood obesity  is on the rise, but do parents notice? They don’t seem to be concerned, and many are in denial. According to a recent study at the University of Nebraska-Lincoln, half of all parents think their overweight or obese children are in the normal weight range. So, why do parents have a skewed vision of reality? Do all parents see their own children with rose-coloured glasses? Could it be because they are obese themselves?

The University of Nebraska-Lincoln study reviewed 69 other studies and found that a whopping 57% of parents think that their overweight or obese children are in the normal weight range. Surprisingly, these studies weren’t just from the US – these are parental perceptions worldwide. Interestingly enough, some parents have the opposite problem. 14% of parents don’t realize that their children actually have a normal, healthy weight, and think they are too thin! Parents obviously do not necessarily see their own children clearly.

Much has been discussed about how to combat childhood obesity. It has been suggested that junk food should be banned from schools. Legislation  to limit the sugar content in processed foods sold to the public has also been suggested. The Canadian study I mentioned above suggested that family doctors need to do more to help parents be aware about obesity and its ramifications for their own children.

Parents can play a very important role in preventing childhood obesity. We know that children with obese parents are more likely to be obese themselves. It’s important for the whole family to maintain a healthy lifestyle – eating healthy, exercising, and maintaining a healthy weight. If parents keep healthy, they will be more likely to be able to identify their child’s obesity problem, and the whole family will benefit with better health. Alyssa Lundahl, who headed up the U.S. study, says that “‘When parents’ perceptions are corrected, they do start to take action and encourage their children to become more active and maybe turn off the TV and go outside and play.”

Is your child overweight? Do YOU see your child with rose-coloured glasses? What do you do in your home to prevent childhood obesity? Please share in the comments, below!

5 thoughts on “Childhood Obesity: Are You One of the Parents in Denial?”