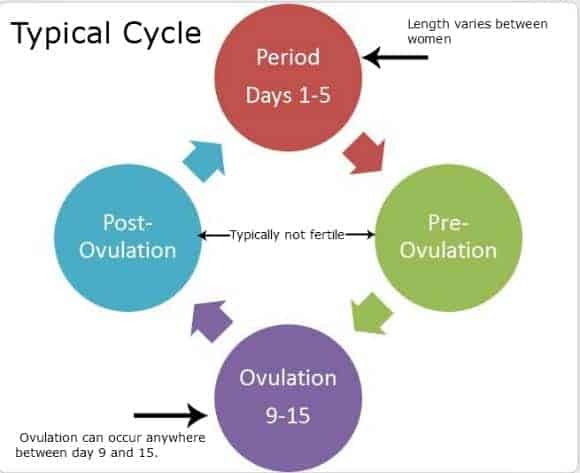 Methods for Tracking Your Fertility Cycle

To use the Calendar Method, you need to keep track of your menstrual cycle for 8 to 12 months. The first day of your period is Day 1. You need to write the total number of days of each cycle because it may vary from month to month. Through these records, you will be able to find the days you are most fertile in the months ahead:

Your last most fertile day: Subtract 11 from the total number of days in your longest cycle. Count ahead that many days from the first day of your next period. Draw an X through this date on your calendar. The time between the two Xs is your most fertile window.

This method should be used in conjunction with other fertility methods such as the ovulation or the basal body temperature method.

Your basal body temperature (BBT) is the temperature of your body when you wake up in the morning, before any kind of effort. As ovulation nears, the body’s BBT drops, then spikes with ovulation. This temperature increase is very slight (.4 or .6 F), so you should be sure to use a basal body thermometer to track your fertility. Start taking your temperature on the first day of your period. Keep the thermometer by your bed and use it before you take a drink or eat, and even before you get out of bed. Any physical activity or even eating can raise your temperature. It is recommended you take your temperature every morning at the same time.
Women ovulate three days after the temperature spikes. Keep in mind that the rise in temperature is not a precise indicator of the ovulation date. So the first month may not help you all that much in determining the days you are most fertile. Over several months, the BBT method should give you a pattern that you can use to predict ovulation, and as a result, the days you’re most likely to get pregnant.
The most fertile period during which you increase your chances of getting pregnant are: Two to three days before your temperature hits the highest point (ovulation), and 12 to 24 hours after ovulation. Having sex 3 days before ovulation is recommended as the man’s sperm can live for 3 days in a woman’s body. The sperm is active and can fertilize an egg during that period.

Your cervical mucus changes throughout the month. A few days following your period, there is no mucus present. These days are called “dry days”. The mucus will appear in the vagina as the egg starts to mature. The mucus is white or yellow or cloudy and sticky. The mucus quantity is at its highest just before ovulation. This period is called “wet days”. The mucus then becomes clear and slippery, like egg whites.

Every woman has unique cervical mucus, but over the course of a couple of months you will begin to see a trend in the consistency, the amount, and the texture.  Women should make note of their cervical mucus from week to week and look for a pattern.
The cervical mucus method is less reliable for certain women for tracking their fertility cycle. Women who are breastfeeding, taking hormonal birth control (like the pill), using feminine hygiene products, have vaginitis or sexually transmitted infections (STIs), or have had surgery on the cervix should not rely on this method.

You can also purchase over-the-counter ovulation kits or fertility monitors to help find the best time to conceive. These kits work by detecting surges in a specific hormone called luteinizing hormone, which triggers ovulation.
Fertility Monitors can be very expensive, but they have a significant benefit. While most ovulation predictors only give you a fertile window of up to two days, these can predict up to six or seven days of your potential fertile days in your fertility cycle.

Are you trying to conceive? What methods do you use to track your fertility cycle?