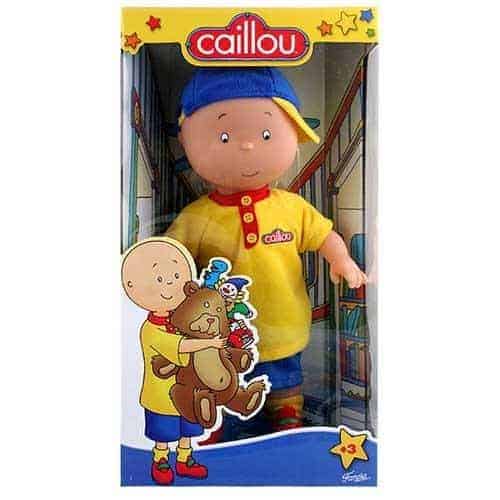 Caillou is a popular character at home. My son grew up watching his cartoons, reading his books. On his 3rd birthday, he got a doll featuring this Caillou Doll. He was delighted. He screamed: Caillou. He opened it immediately and started playing with it.He took it everywhere he went: to the grocery store, to his grand mother’s, everywhere. I washed it several times a week and never lost its shine.

Some highlights about the Caillou doll

My son kept singing with the doll and talking to it. I consider it helped a lot his emotional development and some speech skills. My son had several ear infections so he had some speech language trouble. He did not have many words yet. This doll helped him a lot as he was not afraid from talking to it. He was not afraid of making mistakes. The doll wouldn’t laugh at him and would never let him down. It became literary his best friend and compagnion.

When we were potty training him and he was resisting, we used to put the Caillou doll in an other potty in front of him; it worked most of the time. This alone was worth the investment.

We some time ask ourselves how could a kid become so attached to a simple doll. The answer in this case is very simple: it so realistic, looks perfectly like the character and so soft.

And you? Did your child play with a Caillou doll? You can buy it on Amazon or on Kimmy Shop! Happy Play.