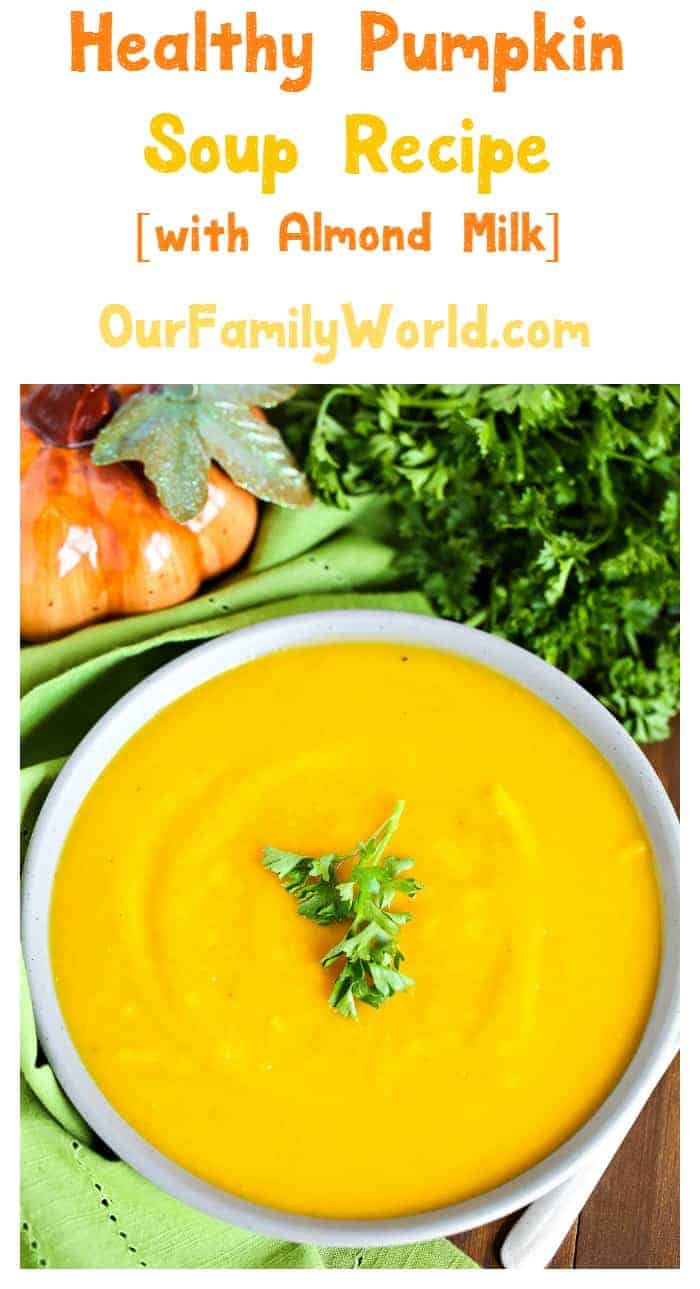 Want a rich and creamy pumpkin soup recipe that really fills you up but is also gentle on your lactose-intolerant tummy? You’ll love today’s recipe! It’s made with almond milk instead of dairy products. That also means that, aside from the honey, this recipe is perfect for vegans. If you are vegan, you can easily remove the honey or substitute it with some other plant-based sweetener without altering the taste too much.

Another great thing about using almond milk in this pumpkin soup recipe: it’s much lower in calories than its dairy counterpart. One cup contains only 60 calories, compared to the 146 calories found in whole milk (and even compared to the 86 found in skim).  It’s also low in sodium and has no cholesterol or saturated fat, making it a better choice for your heart health. Finally, almond milk is fabulous for your skin. It has 50% of your daily vitamin E requirement.

Let’s check out how to make it, then I’ll share some more benefits of this delicious pumpkin soup recipe as well as some other creative ways to use everyone’s favorite fall veggie. Don’t forget to print out the recipe card for later!

Affiliate links included below. Thank you for your support! 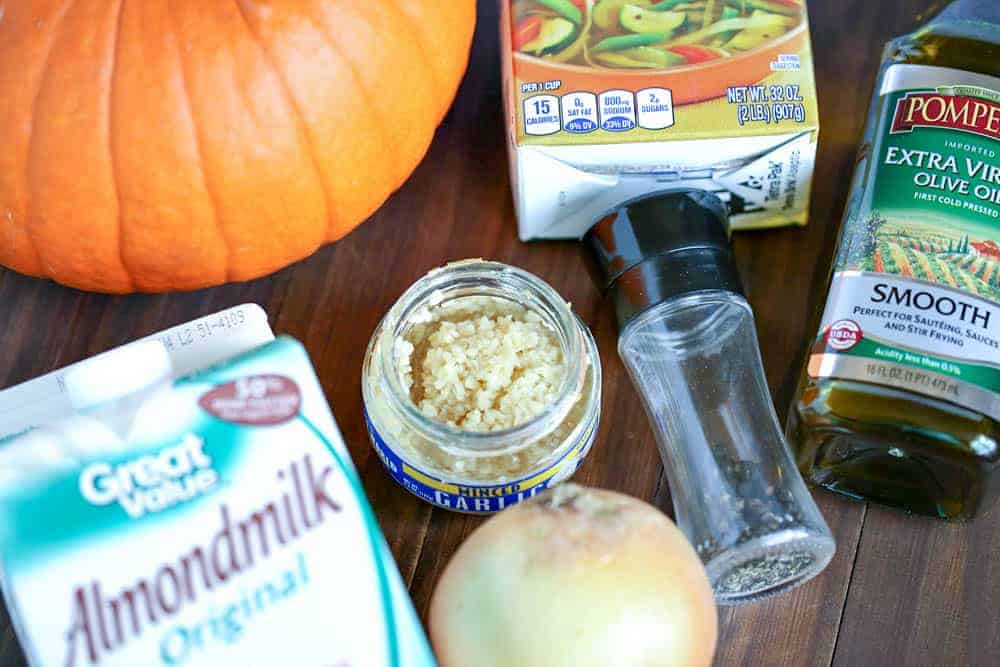 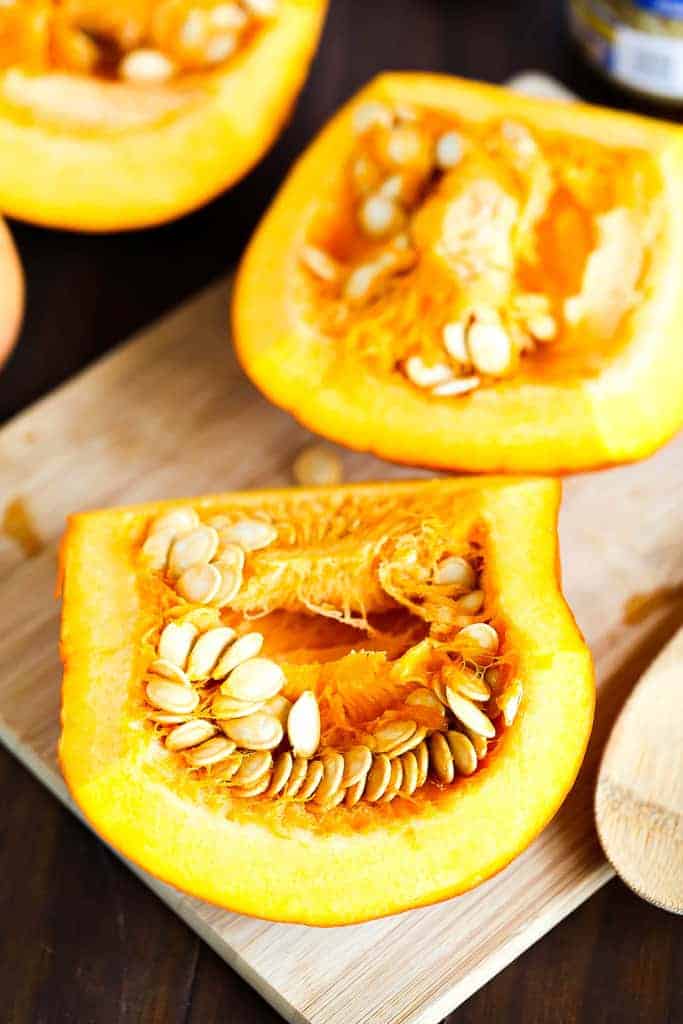 Scrape out pumpkins, put in a blender/food processor until pureed 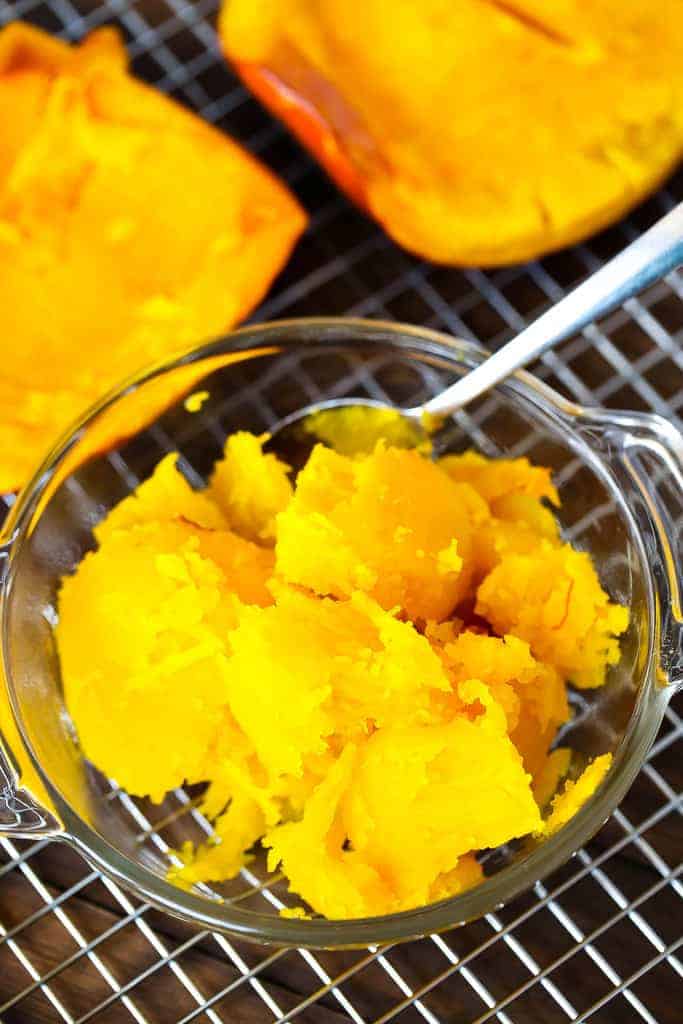 Pour into a pan with all remaining ingredients, stir thoroughly, and simmer until heated throughout.

For more flavor, you could also add garlic/pepper, and other spices. 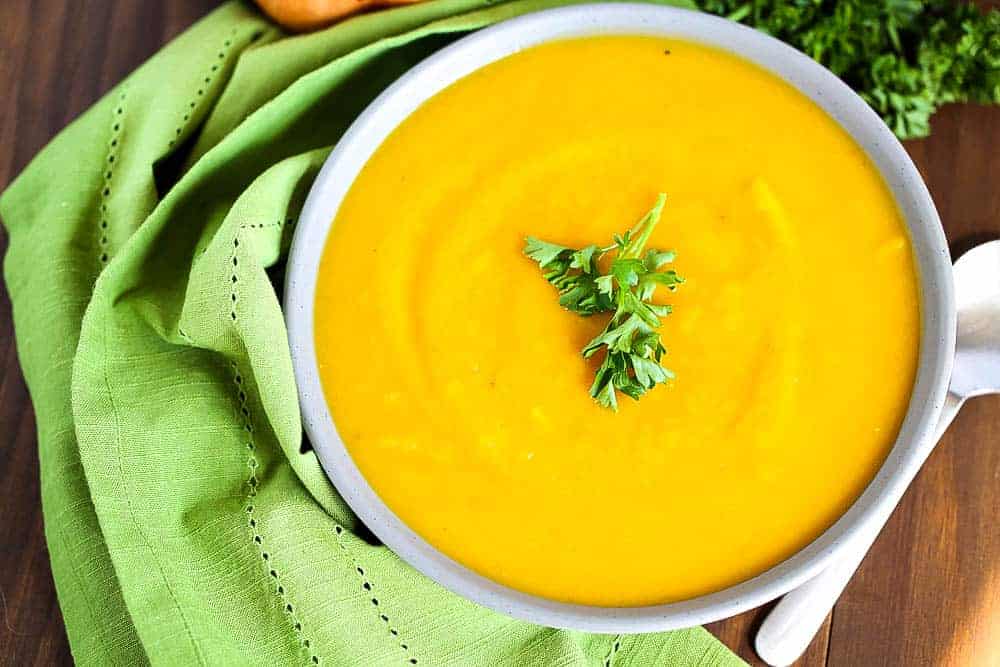 Print this recipe for later:

The fabulous health benefits of pumpkins

This pumpkin soup recipe is packed with some pretty great benefits for your health! Did you know that pumpkin is high in vitamin A, a nutrient that helps maintain your healthy eyesight? A one-cup serving of the yummy veggie is also packed with fiber to help keep you feeling fuller longer, yet it only has 49 calories per cup! Combined with the almond milk, this particular recipe won’t break your calorie budget. Pumpkin is also loaded with other good stuff, like potassium and antioxidants. Pretty awesome, right?

Now, even though this wonder veggie is so good for you, that doesn’t mean you can eat a whole pie and reap the benefits! We mix it into sugary treats way too often. Instead of the usual sweet fare, check out some of these other healthy pumpkin recipes! 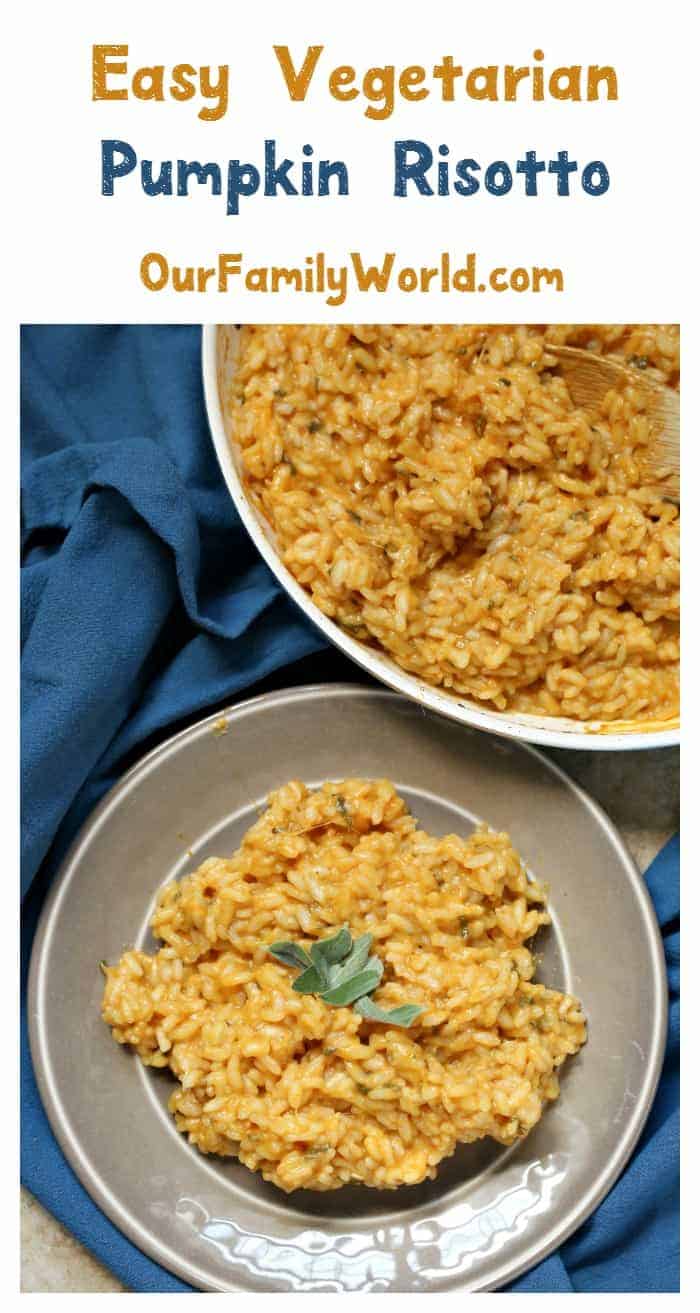 Easy Vegetarian Dinner Recipe: Pumpkin Risotto: another easy vegetarian recipe, this makes a great side dish or a meal! 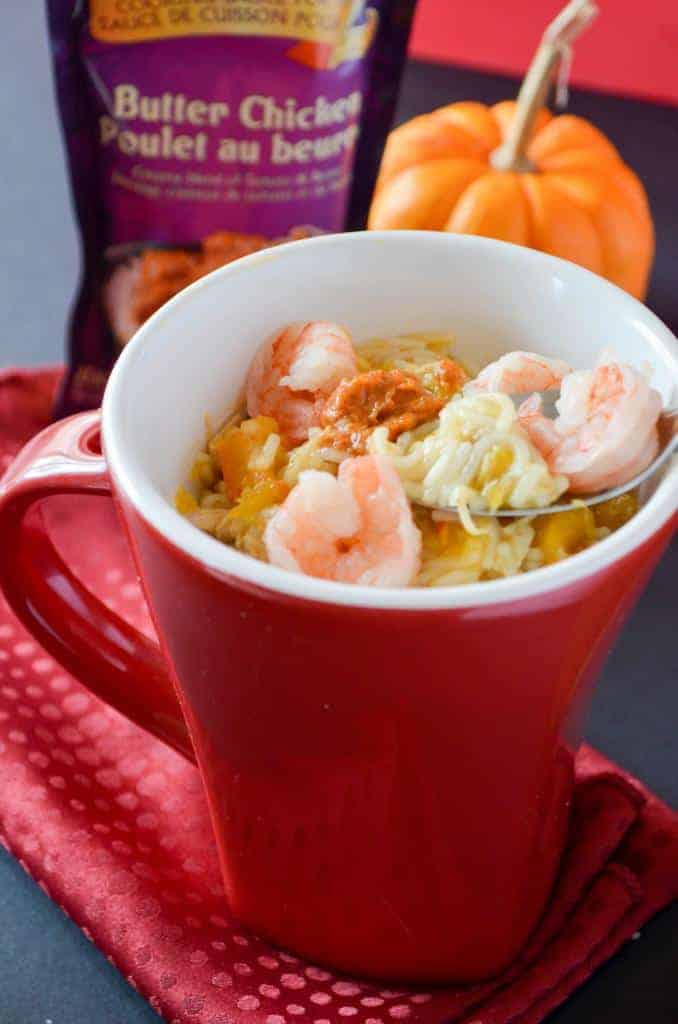 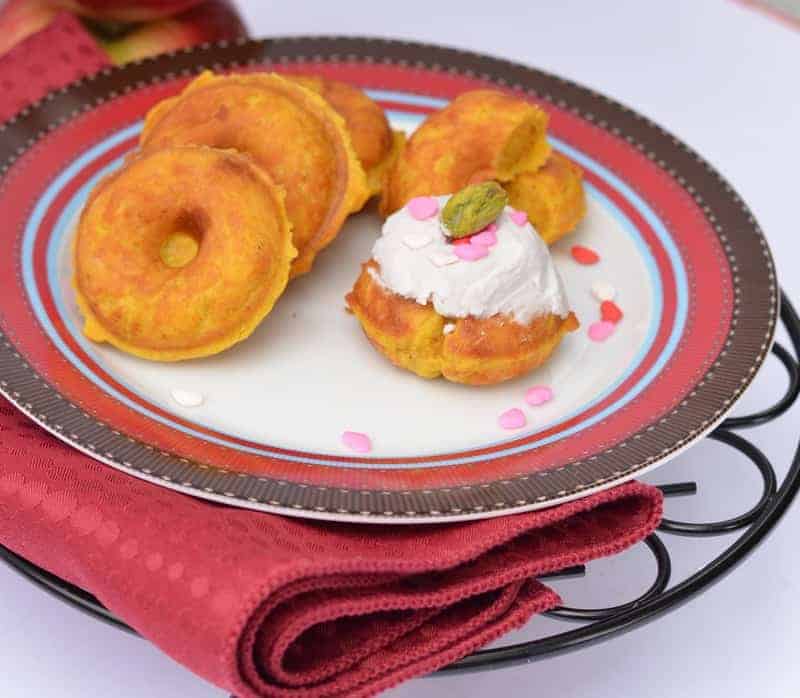 Pumpkin Mini Baked Donuts Recipe with Apple Sauce: if you really want to use pumpkin in a sweet treat, these baked donuts are a great way to go. Since they’re not fried, they aren’t as heavy as a traditional donut (or as loaded with fat!).

There are so many ways to use this amazing vegetable in healthy ways aside from a pumpkin soup recipe. We’d love to hear your favorites! Tell us in the comments!