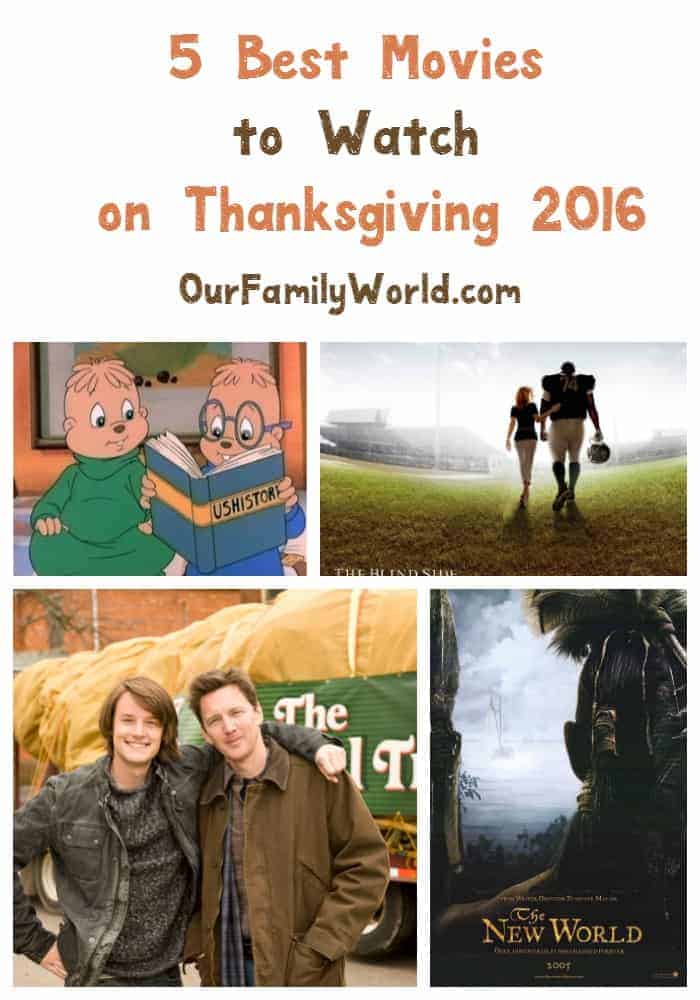 Looking for the best movies to watch on Thanksgiving 2016? We’ve got you covered! We’re sharing some of our favorite flicks from throughout the years that everyone will love! After the family fills up on turkey, stuffing, and cranberry sauce, there’s nothing quite like cuddling up together on the sofa for a movie marathon! Watch one while your food settles or make a whole night of it with a few feel-good films. Check out our favorites, then tell us yours!

Best Movies to Watch on Thanksgiving 2016

The Blind Side is a 2009 biographical sports drama movie that is based on the 2006 book titled The Blind Side: Evolution of a Game by Michael Lewis. It is based on the true story of Michael Oher, a homeless young man who was taken in by a caring and devoted family. He would go on to become a professional football player, currently playing offensive tackle for the Carolina Panthers. The Blind Side stars Quinton Aaron as Michael Oher, Sandra Bullock as Leigh Anne Tuohy and Tim McGraw as Sean Tuohy.

The New World is a 2005 romantic historical drama movie that focuses on the English exploration of Jamestown, Virginia and highlights some of the most reputable characters in history including Captain John Smith, Captain Christopher Newport, Pocahontas and John Rolfe. The New World stars Colin Farrell as Captain John Smith, Christopher Plummer as Captain Christopher Newport, Q’orianka Kilcher as Pocahontas and Christian Bale as John Rolfe.

Free Birds is a 2013 computer-animated buddy comedy movie that focuses on two turkeys, Reggie and Jake, who are from two different worlds but they team up together to go back in time to alter the course of history, getting turkey off the Thanksgiving menu. Free Birds stars the voice cast of Owen Wilson as Reggie and Woody Harrelson as Jake.

The National Tree is a 2009 family drama movie about Rock Burdock, a teenage boy whose Sitka Spruce tree was chosen as the National Christmas Tree to be planted on the lawn of the White House. In the film, the tree was originally going to be bulldozed because Andrew McCarthy’s character is selling his home.  The National Tree stars also stars Evan Williams as Rock Burdock. This heartwarming story will inspire your whole family!

These are definitely some of the best movies to watch on Thanksgiving 2016! We’d love to hear your picks! Tell us in the comments!

10 thoughts on “Best Movies for Families to Watch On Thanksgiving”