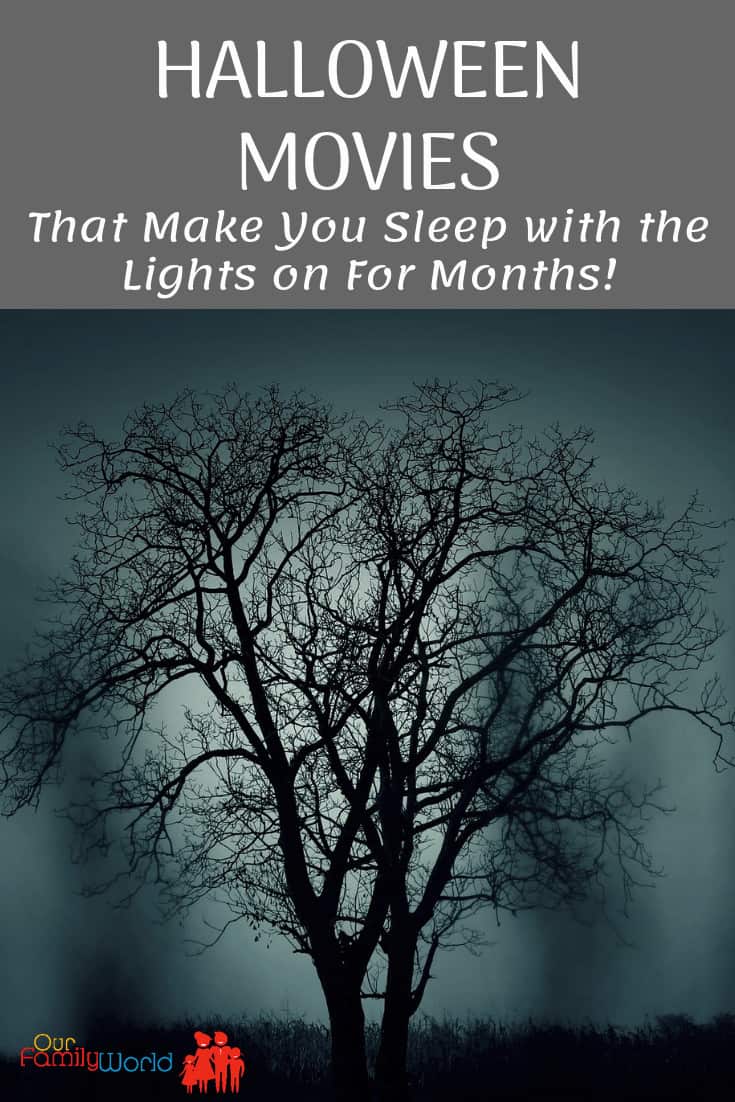 Love a good scary Halloween movie? I’m not talking about the family-friendly Casper variety, I mean the horror movies that make you jump and spill your popcorn across the room! If so, you’re going to love these scary Halloween movies for adults! They’ll have you sleeping with the lights on long after the trick or treaters wipe out your candy supply!

Head’s up: we’re included the trailers for each of these scary Halloween movies. They’re not on autoplay or anything, but don’t click the play button if you have sensitive little eyes around, okay?

Related:Not So Spooky, But Oh So Fun Halloween Family Movies

House of 1000 Corpses was released in 2003, directed by Rob Zombie and stars Chris Hardwick, Rainn Wilson, Sid Haig, Bill Moseley and Sheri Moon Zombie. The movie is rated R because of strong sadistic violence and gore, nudity and strong language. When two couples set out to research a local legend, Dr. Satan, they get lost and end up prisoners of a family of psychotic and bizarre serial killers.

The Haunting was released in 1999, was a remake of the 1963 movie of the same name and stars Liam Neeson, Catherine Zeta-Jones, Owen Wilson and Lili Taylor. The movie is rated PG-13 because of violence and gore, strong language and intense scenes. When a team of paranormal professionals investigate the strange happenings that are occurring in an ill-fated home, they soon discover they are fighting for their lives and the house is fighting back.

House on Haunted Hill was released in 1999, was a remake of the 1959 movie of the same name and stars Geoffrey Rush, Famke Janssen, Taye Diggs, Ali Larter, Jeffrey Combs and Peter Graves. The movie is rated R due to horror violence and gore, nudity and some strong language. A wealthy millionaire offers to pay a group one million dollars if they spend the night in a house that is supposedly haunted. The group thinks it is all a joke but think twice when strange things begin to occur.

Thir13en Ghosts was released in 2001, was a remake of the 1960 movie 13 Ghosts and stars F. Murray Abraham, Matthew Lillard, Tony Shalhoub, Embeth Davidtz and J.R. Bourne. The movie is rated R due to horror violence and gore, sexual images and strong language. A man, his two kids, nanny and attorney become prisoners of a home that is one big evil machine.

The Conjuring came out in 2013 and I still don’t like to sleep with my feet uncovered! When that ghost grabbed the girls foot and yanked? Nightmares for months! Years even! It’s based on the works of actual parapsychologists, the incredibly famous Ed and Lorraine Warren (well-known for debunking the Amityville Horror). If you don’t believe in ghosts, it’s just a scary movie. If you do believe, the fact that they claim to base it on a true story will scare the pants right off you!

If you’re feeling super brave, have yourself a scary Halloween movies for adults  marathon! Otherwise, enjoy one or two a night leading up to the big holiday. Just make sure the kids are safely tucked away and dreaming of happier haunts because these are most definitely not appropriate for little ghouls!

What are your favorite scary Halloween movies for adults? Tell us in the comments!

19 thoughts on “Halloween Movies That Make You Sleep with the Lights on For Months!”