This Halloween pumpkin carving post is brought to you by Glad. All opinions are my own. 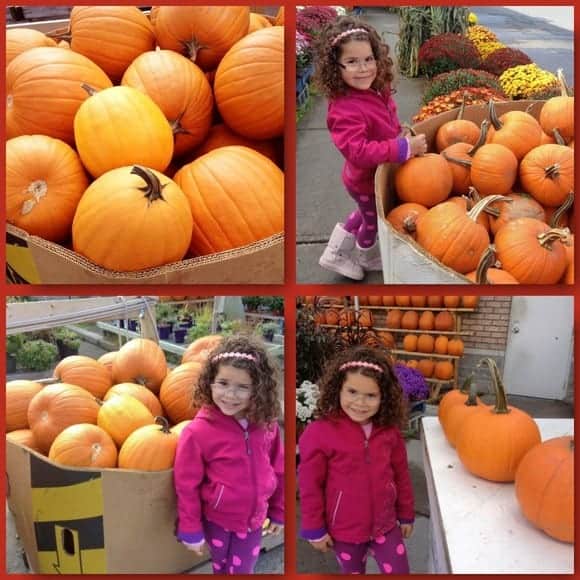 I want to share a secret with you (but don’t tell everybody): I have never carved a pumpkin before! Yes, never until this year! Why? Because I thought it was a pain carving it and the wastes are kind of  smelly! But for those who have children, you know that your kids are always challenging you. My 6-year-old daughter was dying to carve a pumpkin this year! I managed to avoid it the past years but I could not find a viable excuse this year! Especially with the help of the Glad Compostable Bags

So we bought the pumpkins and we tackled the pumpkin carving on a Saturday morning. I had enough caffeine and watched numerous Youtube Videos on how to carve a pumpkin! I found a great tutorial that helped us start this fun activity with my daughter! My husband was a great help in this activity (or let’s say he did 90% of the job: I love when he rescues his wife in these kind of situations). So we carved the pumpkin, decorated and to tell the truth I had fun! My daughter did not want something fancy: she wanted it a Jack O Lantern and basic pumpkin carving!

Well to my big surprise: I had fun carving the pumpkin with my daughter and husband! It was that nice family moment that you want to repeat over and over again! My husband was making fun of my poor carving skills and my daughter was just having fun digging into the guts and decorating! 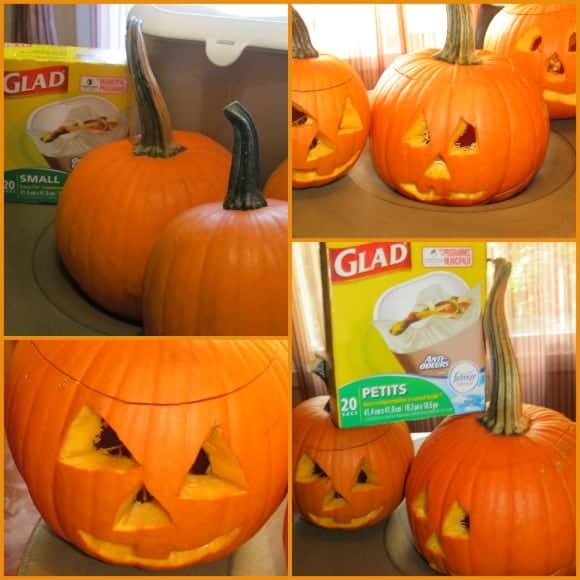 Once this Halloween activity done, I split the pumpkin guts into 2 bags: the Glad Compostable Bag with Odour Guard with Febreze freshness and a regular bag! I put the bags in separate compost bins and stored them in the kitchen! 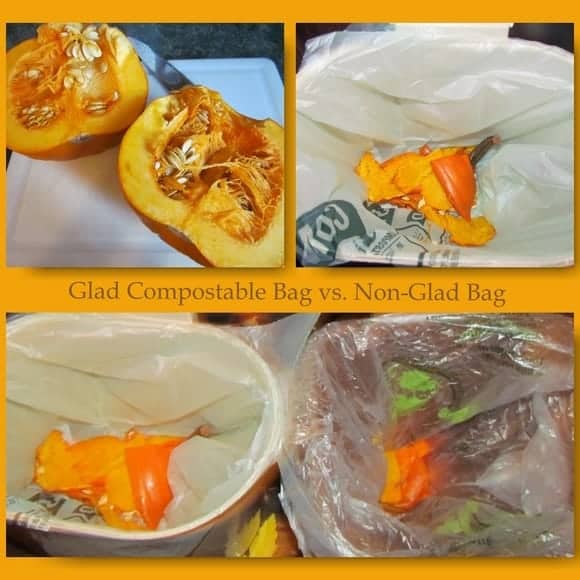 The Glad Compostable Bags are easy to tie and smell fresh! The smell is just perfect: not too much! I am sensitive to smells and usually cannot handle too much perfume or odors.  They are 16.3 in * 16.5 in. They are great for a small compostable bin! They sustained the large quantity of pumpkin guts! We carved 3 pumpkins! 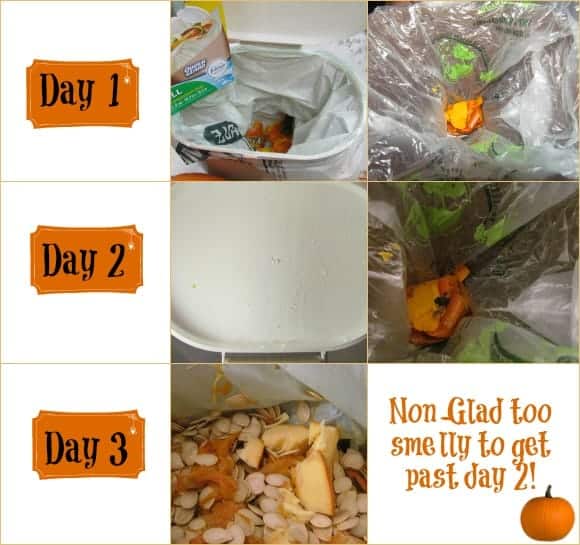 Day 1: I checked on the the bins! The bin without Glad Compostable Bag was too smelly! I had to remove it and store it outside

The other bin with the Glad Compostable bag did not smell a thing! I had to open the lid to start smelling something. But I had to stick my nose to the guts (or almost) to smell something! The Febreze was covering any other smell!

The bin with the Glad Compostable bag: Condensation was starting on the lid. We still did not smell any odors until we opened the lid! The odor was starting but it was not strong!

The pumpkin guts looked pretty good! As if I just put them in the bin!

As for the Glad Compostable bag bin, there was more condensation on the lid. I did not smell any odor until I opened the lid! Again the odor was not strong! The pumpkin guts started decomposing!

It was a fun experiment for my daughter, she opened the lid every morning to check on the pumpkin guts and discover what happened.

I highly recommend using Glad Compostable Bags: they are compostable and help control nasty odors in your kitchen! I have a small compostable bin in my kitchen for organic remains and after 1 day (with regular bags), it smelled too strong ( or sometimes developed some flying things ) that I had to take it outside! But with Glad Compostable Bags, I don’t have to worry about that anymore! No more smells and more composting! 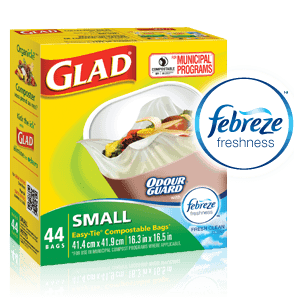 Check out Glad Compostable Bags now and get a coupon for $2 off your purchase!