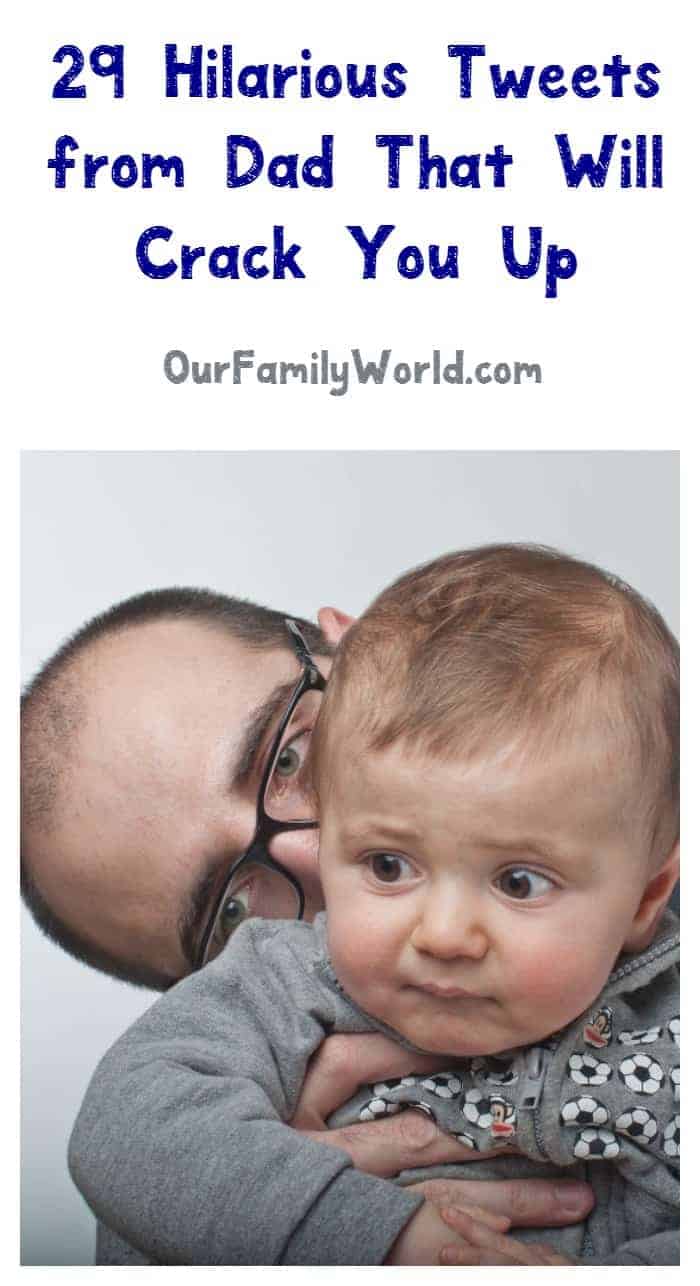 Need a great Father’s Day laugh? Check out these 29 hilarious tweets from dads that will totally crack you up! Like motherhood, fatherhood definitely comes with its up and downs. Dads have a spectacular way of turning the downs into comedic gold. These funny tweets prove that dad definitely has a major sense of humor and can laugh at himself when things go awry! Check them out!

Related: 23 Funny Parenting Tweets We Can Totally Relate To

1. When you’re a dad, and the kid is nearby, it’s always the kids fault.

Happy Father's Day. Hold that flashlight steady so he can find that screw you made him drop.

2. This is too true, especially for older dads!

A thoughtful way to honor your dad on Father's Day is to post a picture of him on a social media site that he doesn't know how to use.

3. This is so relatable! How many times have you paid for your own gift, only to not like it?

Being a father is thankless except for one day a year when a child gives you a bad tie you paid for. Happy Father's Day.

4. It’s always dad who is worried about letting all the cold air out.

Happy Father's day to all the dads out there trying to keep the front door closed so u don't AIR CONDITION THE WHOLE NEIGHBORHOOD. COME ON

5. The best Father’s Day gift is leaving him with the kids while you go out and enjoy yourself! Kidding…sort of!

6. Father’s Day is never complete without some Star Wars humor. Take it to the extreme! It’s your day.

Since today is Father's Day, I am picking up my kids' calls with "I am your father" complete with ominous tone.

7. Agreed! Dads only remember because we tell them, and because of the cool Father’s Day deals.

If we all shut up about it, dads wouldn't even remember it's Father's Day and we could totally get out of having to do it.

8. Shopping for dads is hard! At least he’s not appreciating something unique this year.

Tomorrow's Father's Day. I bet the kid gets me another vest.

9. No gift needed. Sometimes the best gift is showing dad that you actually took his advice.

"No strollers will be allowed. We discourage any infants or babes in arms." – really??? #HappyFathersday #smh

11. “I accidentally dripped some mustard on my newborn daughter’s forehead and long story short a nurse just walked in and saw me lick the baby” James Breakwell @XplodingUnicorn

I accidentally dripped some mustard on my newborn daughter’s forehead and long story short a nurse just walked in and saw me lick the baby.

12. “Parents: don’t give your child the answers to his homework.  He needs to learn on his own that you don’t know what you’re talking about”.  Cinco de Meh @TheAlexNevil

13. “do a golf swing at some point during every conversation so that people know you’re a dad.” Grant Tanaka @GrantTanaka

14. “I wear a clown mask to sleep in case one of my kids has a nightmare and comes to sleep in our bed.”  Abe Yospe @Cheeseboy22

15. “I’m at my parenting best when I randomly yell out “be careful” every few minutes without looking up from my phone.” Dad and Buried @DadsndBuried

16. “I’m teaching my daughter that the sun goes down each night because it’s mad at her. Probably gonna write a book on parenting at some point.” Ryan Reynolds @VancityReynolds

I'm teaching my daughter that the sun goes down each night because it's mad at her. Probably gonna write a book on parenting at some point.

17. “Alright, who switched out my 5yo’s Star Wars gummy vitamins for ones that are exactly the same but apparently “TOO SPICY”?!?” Brent Almon @DesignerDaddy

18. “Of course I talk in my sleep. I have twin 5yos, I answer most of their questions while I’m still asleep.” Robert Knopp @FatherWithTwins

19. “There should be a children’s song “If you’re happy and you know it, keep it to yourself and let your Dad sleep.”” Jim Gaffigan @JimGaffican

20. “I know you’re my people if I hear you humming the Paw Patrol

theme song then catch you trying to aggressively shake it out of your head.” Mike Reynolds @EverydayGirlDad

My kid just flushed her socks down the toilet because "dirty stuff goes there."

23. “4-year-old: In kindergarten, will I always have to do my homework? Me: Always. 4: Even if I get eaten by sharks? Me: *nods solemnly*” James Breakwell @XplodingUnicorn

24. “I want to love something as much as my son loves raisins and trains.” Lin-Manuel Miranda

I want to love something as much as my son loves raisins and trains.

25. “5yo daughter going on play date to cinema… with a boy! Need 2 sit him down and find out his intentions #interrogation#raisingdaughters.” dad tweets @dad_tweets_

27. “Just texted my daughter: “You are at school and I am hanging out having fun. HA HA HA!!!” I am an awesome father.” Michael Ian Black @MichaelIanBlack

28. “When my kids and I have a water fight it still takes me at least two full minutes to remember to not ruthlessly dominate” Andy Richter @Andy Richter

29. “5: Daddy can I tell you a secret? Me: sure thing buddy 5: *grabs my face and whispers* I just pooped and didn’t wash my hands.” Daddy Jew @DaddyJew

What are some of your favorite hilarious tweets from dad about parenting or Father’s Day? Share below!

Leave a Reply to Tami - This Mom's Delight Cancel Reply