Canada is one of the most beautiful countries in the world, and I’m not just talking about our breathtaking views. I’m talking about our generous spirits. Did you know that, according to research, when asked why they give, most Canadians answered “because someone asked.” That’s it. No other reason aside from someone needed help and asked. I think that makes Canada pretty beautiful, don’t you?

If asking someone to give is effective, imagine how much further a dare could go. Remember when you were a child, turning down a dare was pretty much the same as admitting that you were chicken? A double dare? Forget it! No getting out of that! We may be all grown up now, but some things still stick with us. When someone gives me a dare, something clicks in the back of my head that says “I’ll show them I can do it!”

I Dare YOU to Give & Make Canada Even Better

Imagine how much more we can do if every Canadian dared just one person to give. My Giving Moment launched a fantastic campaign, called Dare2Give, inspired by the Governor General of Canada. During this campaign, they’re encouraging every Canadian to double their giving impact by daring another to give as well.

Today, I’m daring three people to get out there and give! I dare my good friend Catherine and two of my fellow bloggers, Paula and Anne Marie.

My dare is simple: go out and perform one act of giving this month. Volunteer at a local organization that helps those in need. Donate money to your favourite cause. Clean out your closet and give winter coats that you’ve outgrown but are in otherwise good condition to Canadians who may go cold this winter. Donate your time to help a local farm feed the animals. The method is up to you. 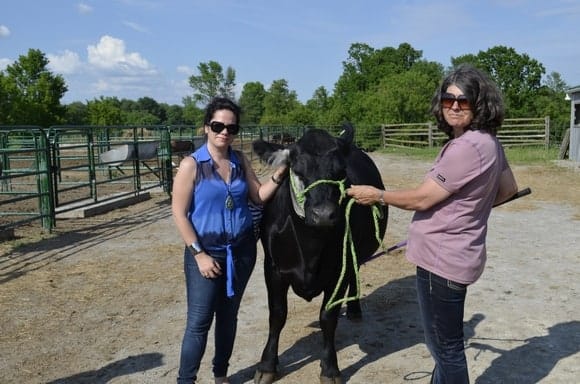 That’s the great thing about giving: it can come in so many forms. If you don’t have extra money, donate your time. Don’t have much of that either? Go through your children’s books and give those that they don’t read anymore to a program that supports literacy. Double your casserole recipe tonight and give half to your neighbour who just lost his job.

Spread the Giving: Dare a Friend with Dare2Give & Contest

It’s your turn to keep the giving going! Dare a friend, neighbour or co-worker to give to others. Head over to the Dare2Give website for ideas. During the My Giving Moment campaign, you’ll not only double your giving by daring a friend, you have a chance to win for your charity. The grand prize is a television commercial! 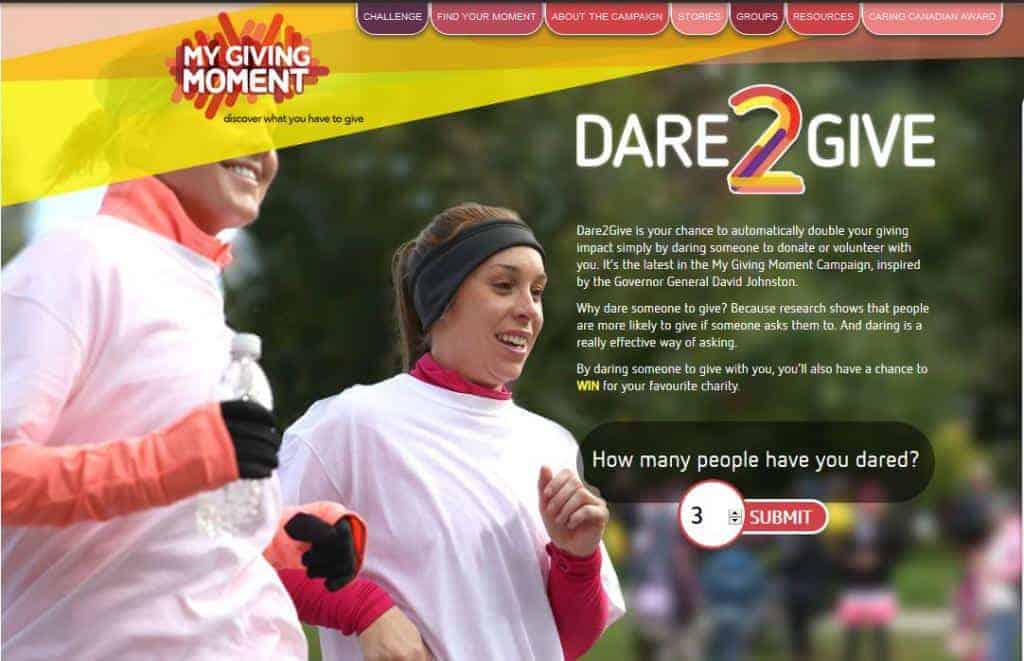 Once you’ve made your dares, visit Dare2Give to add them in the counter. Then just fill out the form to enter for a chance to win prizes for your charity. The campaign ends on December 14, 2014. That’s it! So easy! So go on, make Canada even better by daring your friends to give along with you. I dare you!

Visit the Dare2Give website or see below to enter your dares for a chance to win for your favourite charity!