Did you do that?  Borrow money to put your child through extracurricular activities or hockey? If yes, you are not alone! According to a survey conducted by Canadian Scholarship Trust Plan (CST)  Three out of five Canadian parents (61 percent) say they, or someone they know, have borrowed money or used their retirement savings to put a child through hockey or other extracurricular activities! 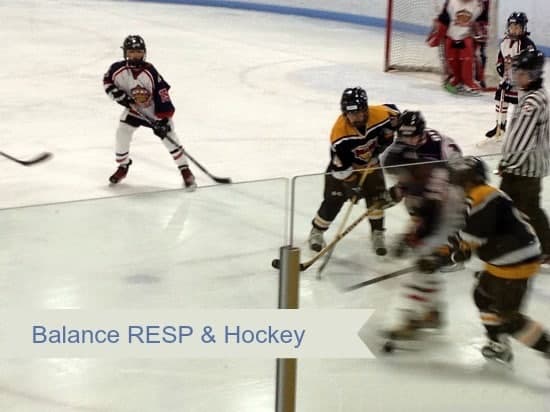 And guess what? 51 percent of parents say they, or someone they know, is spending more money to put a child in an extracurricular activity over an education savings plan like an RESP.

So basically what parents do: spend up to $10,000 for their kids to play hockey and they don’t balance that with RESP: (Registered education saving plan). Does it make sense to you? I think it does not and it should not make sense! Here is why!

RESP & Extracurricular activities: how to balance all that!

When my kids were born, my sister asked how she can contribute! I said RESP! She laughed at me and said: “they are babies! It’s too early!”

“It’s never too early to start saving,” I replied! We are also part of 89% (of parents, surveyed by CST) who believe it is important for parents in Canada to help their child pay for their post-secondary education!

For those who don’t know: RESP is a registered saving plan where Canadian government matches 20 per cent of the first $2,500 in annual contributions. It’s money offered by the government and a tax-deferred way! So for $2500 saving, the government provides $500. Isn’t it nice?

To finish my story, my sister opened an RESP account for my children! She put money in it and we started saving from day 1 (okay maybe month 2 or 3 as we were busy parents).  Since the provincial government gave us child support, set up an automatic withdrawal to our children’s RESP accounts! Money in and money out = you don’t feel it on the budget!

When kids turned 3, we started the extracurricular activities! We feel that it’s important for kids to have fun and exercise! We started with swimming lessons. They are not expensive so it was manageable. But then my son wanted to play hockey! Ouch! The registration fees are expensive and the gear too! The money put in hockey was more than the money we were saving for post secondary education! It did not make sense! Besides the hockey costs were melting our saving accounts! We had to take action!

RESP And Extracurricular: our tips to balance?

Invest first in your child’s post-secondary education! They will thank you later!

Use all the tax credits and tax returns

Your child cannot sustain 3 extracurricular activities without becoming over-scheduled and overloaded.  Your budget can’t sustain it either! Pick one activity and stick to it! My son played hockey for 3 years!. We bought used hockey gear and we did a lot of fundraising to reduce the costs! After 3 years, my son did not enjoy as much and I was tired of sitting in frozen arenas! I figured that he will never make it to the NHL. About 0.1 percent of the kids who play hockey will appear in just one game in the NHL! . We switched to skiing (which is expensive but at least we had a great family time).

If you cannot afford to pay for extracurricular activities for one year, it’s not that a big deal! Children can play outdoors with the neighbors (there are outside hockey rinks and kids will have a blast). You can go biking as a family during spring and summer. I bought a used bike from a garage sale for $25! I have been using it for 5 years! Do what’s good for you and not what looks good to others. Just because 36% of people believe that paying for extracurricular activities like hockey is more important than saving for education doesn’t mean you have to follow that trend! My child wants to be an engineer and I want to help him with that! Paying $10,000  a year for hockey will not help him but contributing to RESP will do! Start today!

CST’s Beyond the Blue Line Contest and Twitter Party

Want a chance to win $10,000 to help make hockey less expensive? Check out CST’s Beyond the blue line contest! You could help your hockey team or organization win that $10,000! Visit beyondtheblueline.ca to learn more.

Join @CSTConsultants, @beyondtheblueline and @THNKenCampbell on December 17th at 9pm EST where they will be discussing the cost of hockey vs. Education and RESPs. Follow hashtag #hockeyvseducation -they’ll also be giving away 5 – $50 VISA gift cards!

Disclosure: I am part of the C.S.T. Consultants Inc. – Beyond the blue line blogger program with Mom Central Canada and I receive special perks as part of my affiliation with this group. The opinions on this blog are my own

17 thoughts on “Did You Borrow Money to Put Your Child Through Extracurricular Activities? #BeyondtheBlueLine”