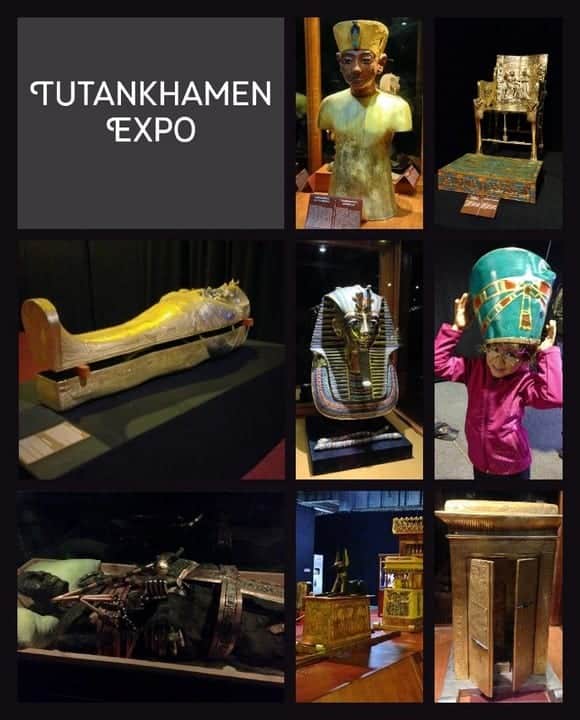 I did not visit Egypt. I wish I did but I had the chance to get a glimpse of Egypt history at the at the  Tutankhamen expo in Montreal. It felt like I visited Egypt but in my hometown. The exposition was held in the Old-Port of Montreal! I went on a gloomy, rainy Saturday afternoon with my daughter. My men happened to have a soccer game to watch. So armed with lots of patience and snacks, I drove to the exposition. It is the first time bringing my daughter to such an event. She loves art but expositions can get boring for 6 year old girls, I thought. And I was wrong! She did not get bored and we were blown away by what we saw.

The Treasures of Tutankhamen Expo

Just about everyone has heard of Tutankhamen- or King Tut as he’s more widely known. He was one of the most famous ancient Egyptian pharaohs. Tutankhamen was a pharaoh from the age of 6 until the age of 18. 6 years old! That’s my daughter’s age! I cannot imagine my daughter being a queen. Although sometimes she behaves like she is. Tut’s tomb was unearthed back in 1922 and instantly became one of the most famous exhibits in the world. The Tutankhamen Expo gave us a look at what life may have been like for the Pharaoh. It wasn’t just an amazing learning opportunity, but a fun day as well. 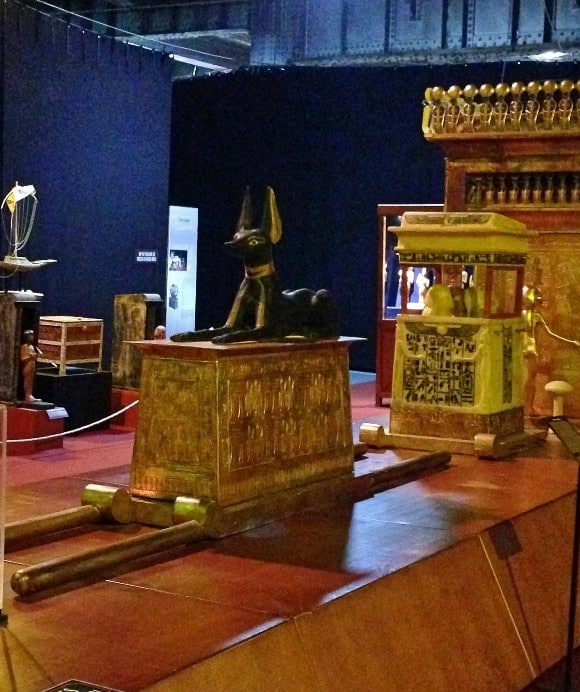 One of the neatest things we saw was King Tut’s treasures. Of course it is not the real Tutankhamen treasure , it is only a replica but still: it was beautiful, shiny and we learned a lot from the exposition. I apologize for the low light in pictures but we were not allowed flash! 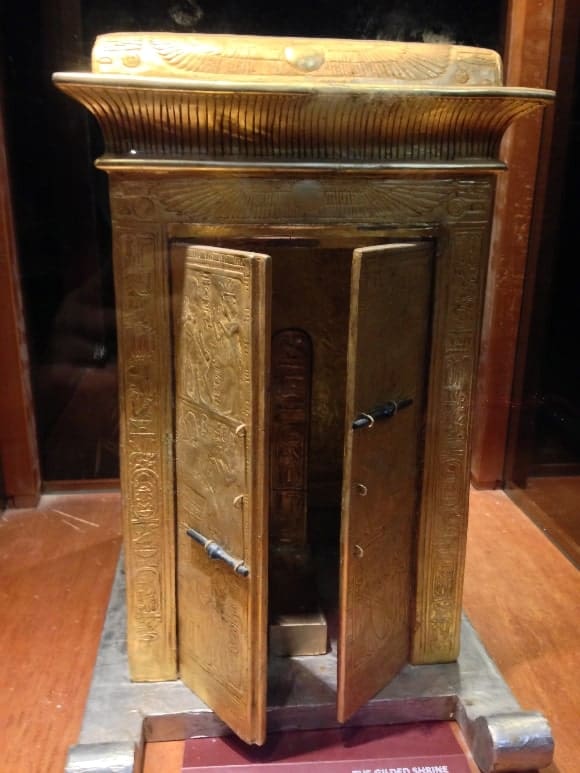 The expos showcased the treasures of the Pharaoh! Treasure = gold. Most of the pharaoh’s belongings were made of gold, even the chair, means of transportation. 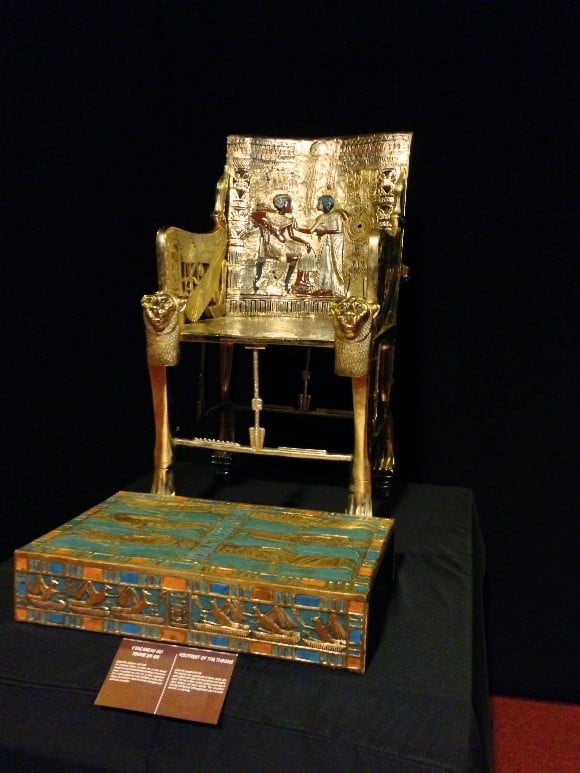 The expo was low in light so we can admire the treasures and the gold. At first my daughter got a bit scared but when she figured it is only fake she relaxed a bit. She admired all the jewelry the pharaohs and the ladies in that era wore. She wanted to try some of them (but of course could not). She did, however, get a fun pharaoh souvenir hat. What do you think? Would she make a great little Queen of Egypt? 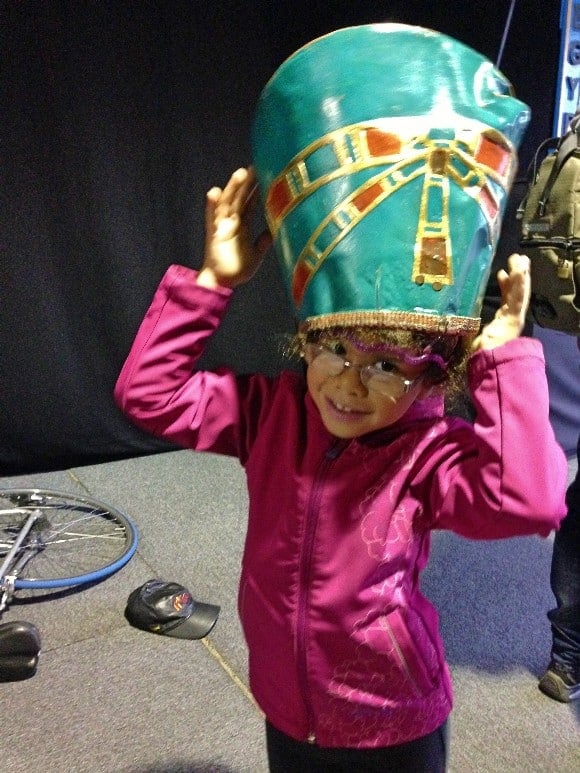 When the pharaoh laid to rest, they buried with him a treasure so it help him in the after life. They even buried 365 small statues of maid to help him each day.

The pharaoh was buried in a tomb. That tomb was covered with 2 other tombs. It was impressive to see. My daughter was a bit scared of the skeleton but I loved to see how it was buried. The pharaoh had jewelry and a sword to fight with, just in case. 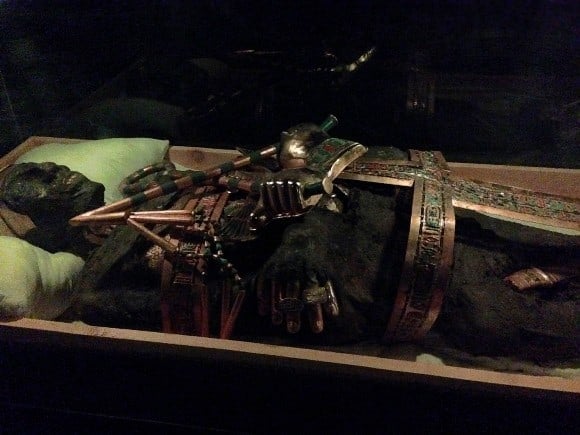 I learned so many things in this Tutankhamen expo. My daughter did too. I would have loved having larger captions on the treasures or even a microphone that helped us, but it was still very informative. If it comes to your city, make sure to visit it. Looking for more fun family vacation destinations? Check out all our favorite places to visit!

Have you ever had the chance to visit a Tutankhamen Expo? What is your favorite part?