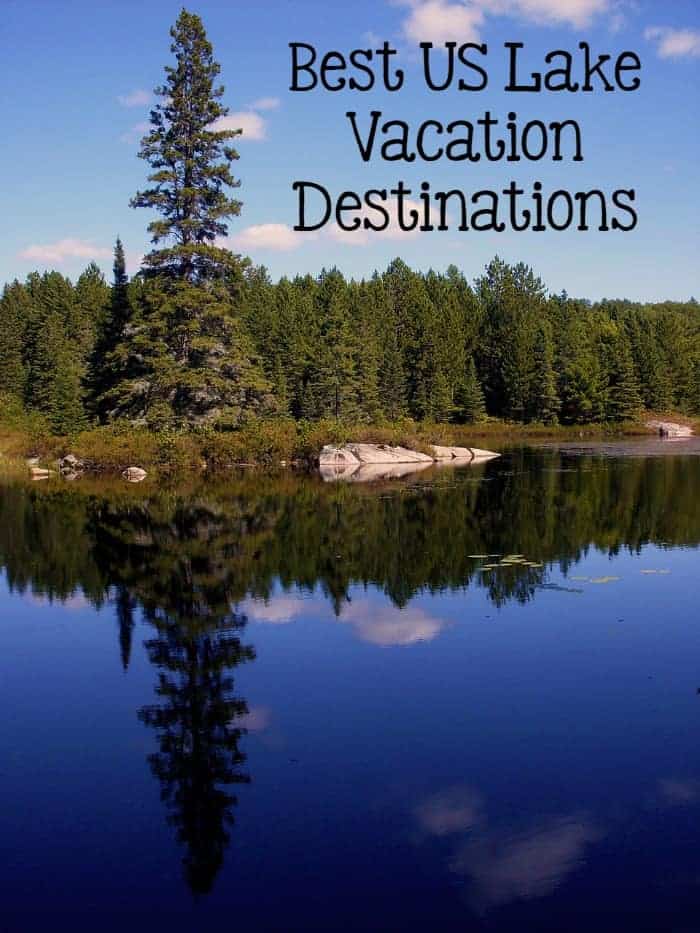 Lake vacations sometimes make the best vacations. There is nothing better than waking up in the morning and having coffee on the deck overlooking the lake and then spending the day swimming, boating and rafting in the lake. While oceanfront property is at a premium during the summer, with thousands of lakes in the U.S., you have a better chance of finding a little peace and better deals, making them perfect cheap family vacations too. Here are some of the best lake vacations in the U.S.

Best Lake Vacations in the U.S.

Lake Champlain borders the states of Vermont and New York and is a natural freshwater lake. The lake features 80 islands as well as several lighthouses and parks. Other features of the lake include Fort Ticonderoga and Fort Crown Point along with the Lake Champlain Maritime Museum. Another great feature is boarding the Moonlight Lady steam boat for a tour of Lake Champlain. This lake become famous because it was a part of three major conflicts: the French and Indian War, the American Revolution and the War of 1812.

Crater Lake is located in the south-central part of Oregon and is the deepest lake in the United States and the 9th deepest lake in the world, at 1, 943 feet deep. Crater Lake partly fills a caldera that is close to 2,148 feet deep. This caldera was formed about 7,700 years ago when Mount Mazama collapsed. There is so much to explore in Crater Lake including loads of trout and salmon fishing, underwater moss meadows and lava formations.

Related: 5 Cheapest Summer Family Travel Destinations in the US

Lake Clark is located in the southern part of Alaska and is 40 miles long and 5 miles wide. It is located in the Lake Clark National Park Preserve. There are only three ways that you can get to this lake: by floatplane, by dogsled or trekking through the Alaska bush. This lake is 50 miles long and features backdrops such as thick boreal forest, whitewater rivers and snowcapped peaks. The main activities of the lake include wildlife watching, kayaking and fishing. There is also lodging along the lake as well as guide services and kayak rentals.

Walden Pond is located in Concord, Massachusetts and was formed by glaciers that retreated 10,000 to 12,000 years ago. The lake features forest-covered shores and an oasis of calm. The main activities of Walden Pond include walking trails, tranquil spots, fishing, swimming and canoeing.

While these are my top picks for the best lake vacations in the US, remember, there are literally thousands- if not hundreds of thousands- of lakes to visit! Of course, some are much smaller than these. Even the smaller ones offer great amenities for families. If traveling far isn’t in your price range, just look around your own area and see what lake vacation adventures await you!

Have you ever been to any of these lake vacations in the US? Which one is your favorite? Tell us in the comments!

7 thoughts on “Plan a Family Getaway to the Best Lake Vacations in the U.S.”