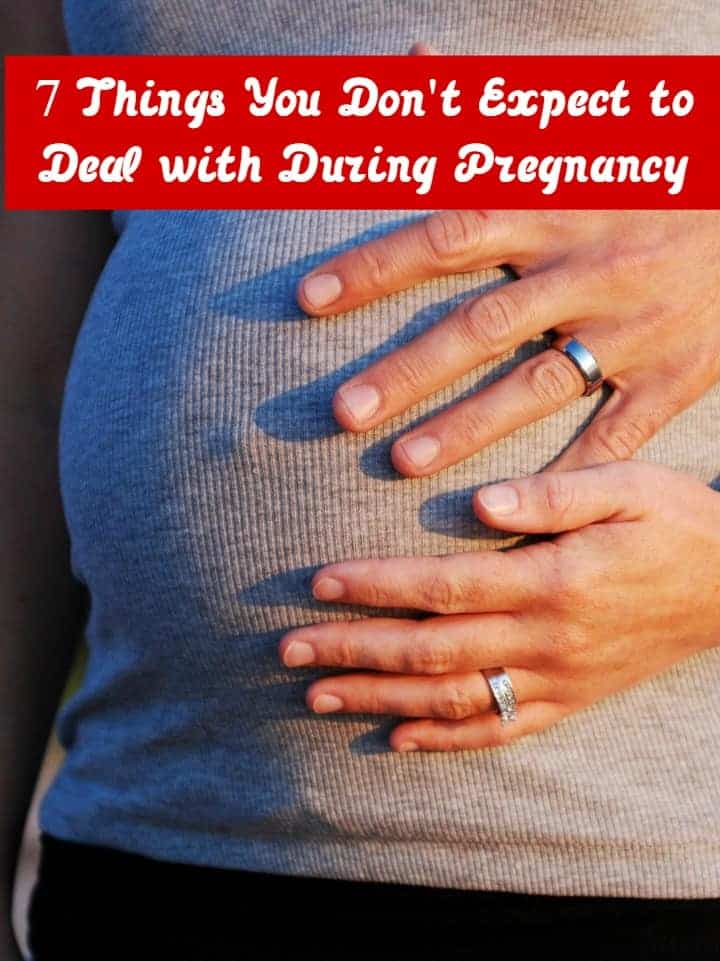 When I got pregnant with my son, I figured I knew exactly what to expect during pregnancy. After all, I spent six years trying for him. That gave me plenty of time to read every single book under the sun about how to have a happy, healthy pregnancy. I was also a long-time member (and for a bit, even an admin) of a rather large, diverse parenting forum (I had originally joined the TTC forums). I figured between the books, the internet research and the actual moms I talked to, I had this whole pregnancy thing down pat.

The thing is, you’re never really prepared for your first pregnancy. It’s nothing like the movies, and research can only prepare you so much. While you can find oodles of info about how your baby grows in your womb, what to eat when you’re sick to your stomach and how to cope with labor pain, there are things no one really talks about much it seems. Check out 7 things I bet you didn’t expect to deal with during pregnancy!

Things You Didn’t Expect to Deal with During Pregnancy

Some parts of it are really boring

When I finally got pregnant, I was SO excited and ready to start the joyous journey to motherhood. Within the first couple of weeks of pregnancy, I had already picked out a nursery theme, filled my registry, deleted my registry, filled it again, pared down my baby name list to a few selections, made about 500 lists of things I needed to know, read every week by week pregnancy book front to back and came up with my birth plan (which got totally blown away when I delivered early). Then I had nothing to do but wait. Wait for ultrasounds, wait for my belly to grow, wait for the first kick, and so on.

You’re pregnant for like 40 weeks, give or take (in my case, take, I delivered at 32 weeks because of preeclampsia). Not every moment is going to be all oohs and aahs. That’s okay! You want a boring pregnancy. Mine was super boring right up until the 3rd trimester. Then I would have given anything to be bored again.

Chances are you’ve heard that your growing belly will get itchy, but for some women, hormones wreak such havoc that everything itches. Everything. I do mean everything. Guess what? Not a single antihistamine is a class A pregnancy drug. While class B meds MAY be safe, I was too scared to try them. So how do you deal with this? For starters, I took plenty of oatmeal baths (just get the Aveeno stuff, it’s a lot easier than trying to make your own, and I rarely say that!). I also used real cocoa butter and a lot of lotion. I didn’t know about coconut oil back then, but if I had to go back in time, I’d give that a try. It’s a simple DIY moisturizer that’s safe for most skin types.

Between the hormones making you dizzy and the big belly throwing off your balance, even the most graceful ballerina becomes a giant klutz during pregnancy. I’m already clumsy, so it was like a million times worse for me. My poor mom almost had heart failure when I fell down the steps. Thankfully I landed just right. I only hurt my side, legs, arm, wrist and back. Not my belly. I can’t even count the number of times I tripped over my own feet.

You can go from fluffy bunny to Psycho in seconds flat

Up until I got pregnant, I assumed Hollywood dramatized an expecting woman’s ability to completely lose it over nothing. Then one day I found myself trying to organize all the containers under my cabinet. It started out fine, I was nesting, I was cleaning, I was happy. Three minutes later, I was bawling and throwing out everything in my kitchen before my mom came along and sent me off for a nap. Oh, and onions! Don’t even get me started about onions. Nothing made me freak out more than someone eating onions near me. You know you’ll get sensitive to smells, right? Well, some smells will make you downright violent!

Excessive stinky sweat? Check. Dirty dreams? Double check. Hair growing in weird places? Gas and belching? A major acne breakout right before a big night out? Check to all. Think about it this way, if you have a boy, you’ll know exactly how he feels when he goes through puberty!

Did you know that your feet grow during pregnancy? It doesn’t happen to every woman, but it’s very common. Mine went up a full size! Guess when it happened? Right after I finally found shoes I liked for a formal event. You may also experience swelling in your feet. If you end up with Fred Flinstones, get to the doctor. That much swelling could be a sign of preeclampsia. If it’s bad, literally GO to the doctor and show her. I called in and described it to the on-call OB. She insisted I was over-reacting and told me to wear compression stockings. Two weeks later, my unborn son and I almost died. Which brings me to the next point.

You Already Have Maternal Instincts- Use Them!

You might think that those maternal instincts don’t kick in until your baby is born, but trust me, you’ve already got them long before delivery day. I didn’t listen to my instincts. I assumed my doctor knew better about my swelling. I’m not being dramatic when I say I almost died because of it. I was so bad, my kidneys were on the verge of shutting down.

Had I listened to myself, my son may not have been born 8 weeks early and I might not have been sick for months after his birth. Yes, there are many, many times you’ll need to listen to your doctor. If you really feel like something is wrong and she blows you off, though, get a second opinion. Of course, those new maternal instincts can make you do really weird things too. You’ll start parenting your family dog in super weird new ways!

Pregnancy is fabulous in so many ways, plus it comes with a pretty awesome prize at the end. While you’re in the thick of it, you may find yourself thinking “never again” at times. Once you deliver that shiny new bundle of joy, it’s all worth it and you start thinking “I could do this again!” Well, most people do. I had a rough end and thought “nope, that’s it for me!” I’m almost always an exception though, never a rule.

What are some strange things you didn’t expect to deal with during pregnancy that happened to you? Tell us in the comments!