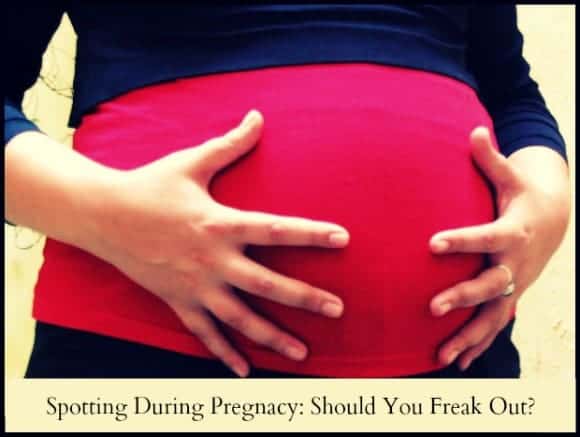 Typically, it’s not something to freak out about. In some cases, it can be a sign of something going wrong, so if you see spotting during pregnancy, it’s best to get it checked out. Besides, you know you’re not going to rest easy until a doctor gives you the all-clear. Also, if you experience spotting, use a pad to keep track of the amount of bleeding. Do not use a tampon!

Causes of Spotting During Pregnancy that Shouldn’t Freak You Out

Before getting into the “freak out” causes for spotting during pregnancy, let’s take a look at some of the more common and less frightening reasons that you could be bleeding.

Frightening causes of spotting during pregnancy

I wish I could tell you that all causes of spotting during pregnancy are nothing to worry about, but that’s not the case. In some cases, those spots could indicate a much more serious issue. Common causes that should send you running to the ER include:

These are just some of the more common signs of bleeding and spotting during pregnancy. Other causes are possible, including cervical cancer and other types of illnesses. The bottom line is this: if you are experience bleeding or spotting during pregnancy, go to your doctor and find out why. Even if it is something minor, knowing reduces the stress you’ll feel if you don’t find out. Stress is not good for anyone, especially pregnant women.

9 thoughts on “Spotting During Pregnancy: Should You Freak Out?”