The phrase “foods that help fight morning sickness” seems almost oxymoronic, doesn’t it? When you’re so nauseous that you can barely manage to keep your head up, the last thing you’re thinking about is food. Oddly enough, the one thing you can’t bear to think about may be the only thing that quells the nausea beast! Read on to find out which foods you should try when you’re battling morning sickness. 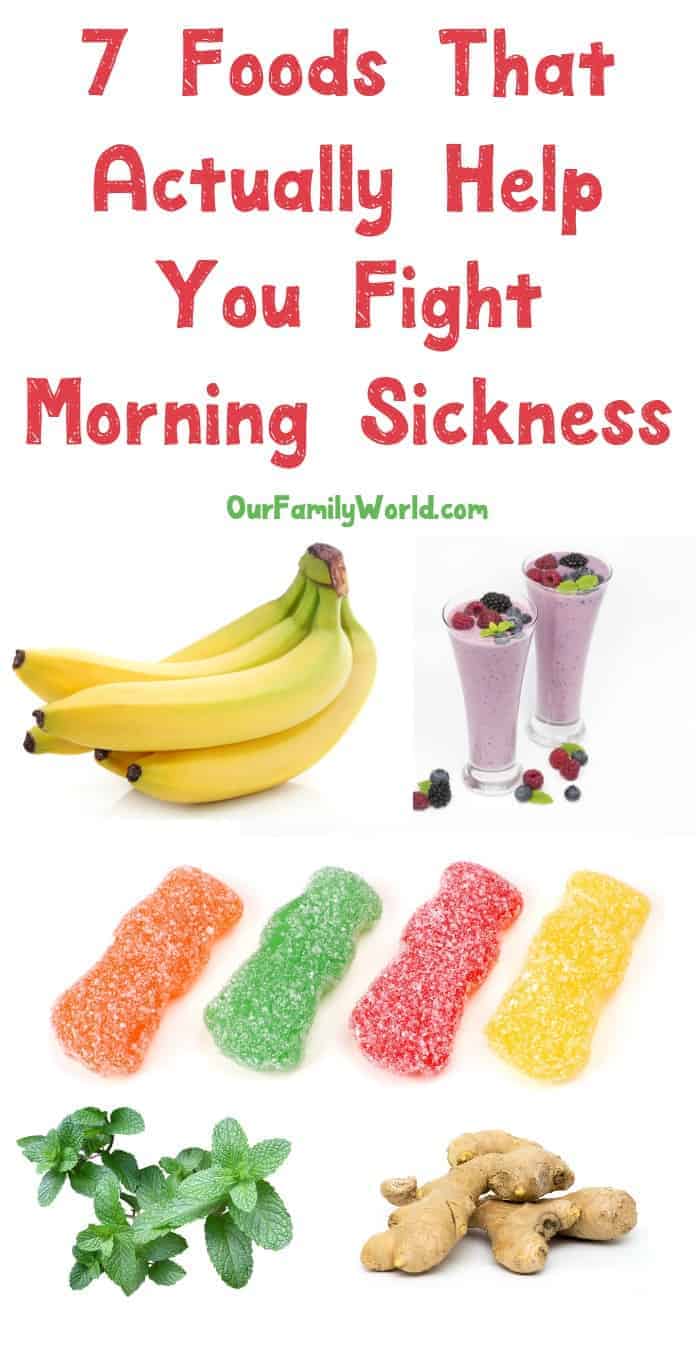 When I was pregnant with my son, my morning sickness was so bad that I actually LOST weight during the first trimester. It wasn’t hyperemesis bad, but pretty close. So trust me, I know how bad it can get and how even the thought of certain foods is enough to send you flying into the bathroom. Still, you have to eat something. Both you and your growing baby need the nutrition now more than ever. So what foods should you eat to help fight morning sickness? Let’s find out!

First things first: while mild to moderate morning sickness is, unfortunately, a normal part of pregnancy, extreme morning sickness is a whole different beast. If you absolutely cannot keep anything down, including at least some type of liquid, you’re at risk for dehydration, malnutrition, or worse. Please call your doctor. Got it? Good. Onto the foods that help fight morning sickness.

For once, it’s okay to be a brat! The BRAT diet stands for “bananas, rice, applesauce, toast.” Basically, it’s all relatively bland food. If you’ve ever had a stomach bug as a kid, you might remember your mom making you foods from this diet. Personally, I can’t stand the texture of rice, and applesauce is hit or miss for me. Bananas and toast, though, worked wonders. Even now, when I get nauseas from a bug, bananas help a lot.

Cold foods like sandwiches, salads, and smoothies may help quell your nausea, as long as you don’t go overboard and keep them relatively condiment-free. In other words, don’t pour half a bottle of heavy dressing on your salad, or slather mayo on your sandwich.

Deli meats have a reputation for being dangerous to eat during pregnancy because they are susceptible to listeria. While most meats are now sprayed with a food additive to prevent it, if you want to err on the side of caution, consider using leftover chicken or turkey that has already recently been cooked and cooled. I love slicing up leftover chicken breast and eating it cold in sandwiches.

Sour candy was one of the few things that soothed my stomach when I was pregnant. I swore by Preggie Pops

, but even a Lemonhead or some other type of sour hard candy helped. I’m not sure why it’s so effective, and trust me, I’ve looked for scientific studies to explain it. Obviously, you can’t live on sour candy alone, so take advantage of the reprieve from nausea to get something else into your stomach asap. FYI, while sour gummies can do the trick, they have the opposite effect if you go overboard! Try to stick to hard candies, you’re less likely to gorge yourself on them.

Crunchy fruits and veggies can help, but again, only if you don’t load them up with “extras.” That means no dipping your carrots in ranch dip or pouring chocolate over your strawberries! If you CAN stomach it, peanut butter is the exception. Just go light. Spread a thin layer on an apple slice and see if you can keep it down.

Vitamin B-6 often helps reduce nausea associated with morning sickness, according to some studies. Sadly, it only helps the nausea and does little to help if you’re already vomiting. Still, snacking on some foods rich in B-6 can help keep the vomiting at bay. The Catch-22? Many of the foods on the list aren’t exactly “sick tummy friendly.” They include things like meats, fish, prunes, and spinach.  A few foods, though, are a little less nausea-inducing. Try sunflower seeds

, nuts, or some avocado or mashed banana on toast. 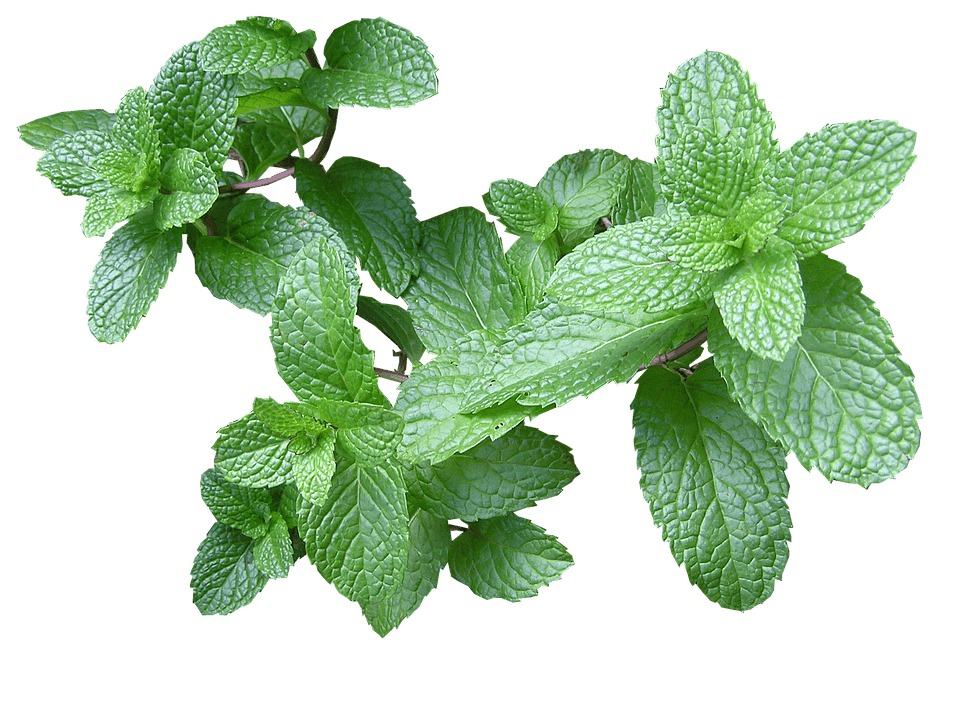 Okay, almost everything. Peppermint is an amazing tool for quelling nausea, especially when you drink it in a tea. Hard peppermint candies

are also fabulous, as long as they’re actually made with real mint. Skip the Thin Mint cookies and Junior Mints, though! Ginger is another fabulous remedy when used in moderation. Ginger ale (again, as long as it’s made from real ginger) and ginger tea are the easiest to keep down. Ginger candies

can be hit or miss. For me, the strong taste overrode any benefits of eating it, but other women swear by them.

Surprising as it is, sometimes you find yourself craving the weirdest foods even during the worst of your morning sickness. Unless it’s something dangerous, like dirt or dryer lint, go ahead and give into your craving. It could be your body’s way of telling you what you need and the key to actually holding something down. I craved sweet, acidic, pulpy orange juice and salty ramen noodles when I was nauseas.

FYI, if you are craving dryer lint, talk to your doctor. It’s called Pica and it’s oddly more common during pregnancy than you’d think. It may indicate an iron or other mineral deficiency.

When you find something that works, try keeping it close to your bed at night so you can grab a quick bite first thing in the morning. Obviously, if smoothies turn out to be your cure-all, you can’t keep one on your nightstand, but you can put all the ingredients together the night before in a “grab and blend” bag. Try to eat small meals throughout the day rather than gorging on three big meals.

As for those foods that make you want to hurl? Feel free to ban them from your vicinity! It’s your prerogative as a mama-to-be!When I was pregnant and managing a photo set in the mall, I banned all of my employees from eating onions anywhere near me! Okay, so legally I couldn’t make up rules about what they could and couldn’t eat, but thankfully they were all fabulous people and totally willing to put up with my random food rules.

Most important of all, remember that morning sickness will eventually pass. You’re not going to be curled up on your bathroom floor for the rest of your life. For many women (including myself), it typically ends once you hit the second trimester. It MAY rear its ugly head again towards the end of your pregnancy, but that has more to do with the fact that your stomach is pushed up into your other organs than the hormonal changes that cause it in your first trimester. Just stick to smaller meals throughout the day and you should be okay.

Did you find any fabulous foods to fight morning sickness when you were pregnant? Tell us what worked for you!