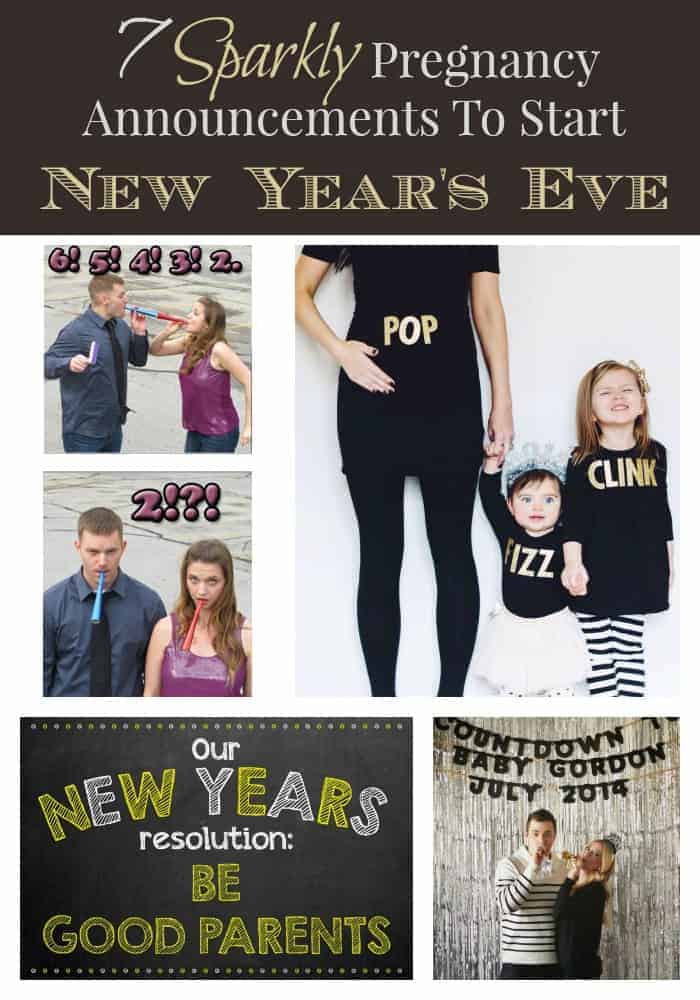 New Years is a great time to share your pregnancy announcement with your family and friends. The holiday is already full of sparkle, fireworks and celebrations. There is no better time to announce a pregnancy with a little bit of extra sparkle and pizzazz! I’ve scoured the web and have found some genius pregnancy announcements you are going to want to see, and save for later!

Pop Open A Bottle For The Big Event

Source: Freckled Shenanigans Studio. You can find them on Facebook!

You might find with a baby on the way that you may be popping more grape juice than champagne this year. Let your family know a big change for the New Year is cause to celebrate! This family went all out for this cute announcement.

Show Off Your Holiday Pop

These stylized shirts for mom and the kids are a super adorable way to announce a new baby is on the way. I love the super graphic feel, and the kid smiles in this picture just add to the excitement.

Announce With A New Year’s Resolution

This sly chalkboard style announcement will let all of your friends and family know that your New Year’s resolution this year is to “Be Good Parents.” I think this announcement is especially adorable for a first pregnancy.

We have you covered with Great Free Pregnancy Announcement Cards to help start your New Year’s budget off right!

Announce With A New Year’s Toast

Sometimes a surprise is made even better with a small gift. Take a bottle of wine over to your family or close friend’s house for New Year’s with this super cute gift tag. Everyone will be so excited when they read the tag to see what bottle you  brought to share!

Can’t decide when to announce your pregnancy during the holiday season? Check out our

Announce With A Countdown

This couple is adorable with their countdown party announcement! This is an announcement I think would be really easy to pull off, with such a cute result. I do have to admire those sparkly silver pants that this gal is rocking for the celebration.

Announce With A Sonogram Picture

Having twins? This picture series is a great way to announce that you will be counting down to two instead of one this year! The surprised look on the couple’s face is priceless!

Which announcement would you like to try? Did you announce your pregnancy during New Year’s Eve? Tell me about it in the comments!