Mississippi has the highest teenage pregnancy rates, with about 55 out of every 1,000 babies born to girls 18 and younger. Governor Phil Bryant believes sexual offenders who prey on young girls is at least partially to blame for the epidemic, and he intends to do something about it. Beginning on July 1st, 2013, hospitals will be required to collect the cord blood from births involving a teen girl and a father age 21 and older. Collection is also required for cases where the father is unknown.

The samples will be kept at the medical examiner’s office. If authorities believe that statutory rape was involved in the pregnancy, they will use the samples as evidence in the case against the father.  The state will cover the costs involved in the collection and storage of the samples. Those in favor of the new law feel it’s a great way to help curb statutory rape and teenage pregnancy resulting from this crime. While deterring sexual predators is always a good thing, the new law does raise several disturbing concerns about privacy and safety. 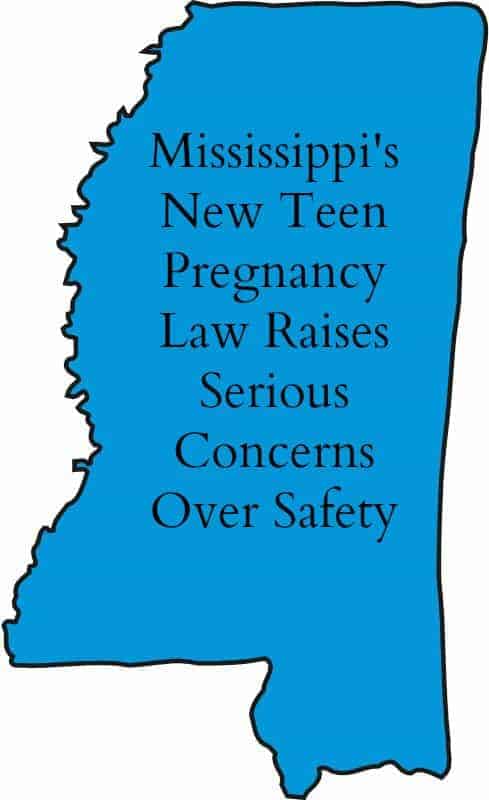 Women’s advocate groups are expressing strong concern over the matter of privacy when it comes to Mississippi’s new teenage pregnancy law. Collecting someone’s DNA against their will and storing it indefinitely isn’t exactly an act that screams “we respect your privacy.” While authorities do it all the time to gather evidence against a suspected criminal, keep in mind that the DNA contained in the cord blood is not just that of the father. It’s a combination of the mother and father, yet entirely unique to the baby. Basically, babies born to teen moms will have their DNA on file before they take their first steps or eat their first sold foods. For those who are against a national DNA registry, this is a major invasion of privacy.

What about the safety of the mother and baby?

Privacy concerns are debatable. Everyone has their own opinion on whether the government should collect DNA samples. Some feel that it shouldn’t matter if you have nothing to hide. While the privacy concerns are definitely something to think about, I’m more concerned about what no one else seems to be addressing at this point: the safety of the teenage mothers.

Let’s think logically for a moment, something that is often difficult when issues involving teenage pregnancy and sexual predators are brought into the picture. If a sexual predator gets a teenage girl pregnant and knows that the state is planning to collect evidence against him as soon as that baby is born, do you really think he’s just going to sit back and let it happen? No, he’s not. Here’s what’s likely going to happen.

A) If he is the violent sort, he is going to ensure that baby never sees the light of day. He is either going to force the girl to get an abortion, likely at a back-alley clinic where it won’t be reported, or he is going to kill her. This is, of course, the worst case scenario, but one that needs to be considered.

B) He will exert control over the girl in other ways, convincing her to leave her family and give birth in another state without such laws. At best, she gives birth in a strange place and gets to return to her home. At worst, she is forced to leave her family and start a new life with the father somewhere else. If that happens,  she loses that all-important support system that helps ease the difficulty of a teenage pregnancy.

C) The mother simply goes without quality prenatal care and delivers her child outside the system. If something goes wrong during the birth (and this is a good possibility, as teenage pregnancies are more likely to produce complications) the mother and the baby die.

Basically, there is very little way that this law will work as intended without causing severe consequences to the mother and baby. Just like the antiquated scare tactics in New York City, this is another case of good intentions gone wrong. It is going to put more girls in jeopardy. While teenage pregnancy is a major issue that needs to be solved, putting lives at risk just isn’t the answer.

What do you think of Mississippi’s new law regarding teenage pregnancy and cord blood banking?