Dealing with a speech delay in a tongue-tied toddler is a little trickier than coping with your average toddler speech delay. Trust me, I know. My son is tongue-tied. He was also quite delayed in speaking. I want to share my experiences with you because I took a different route than many parents do. I opted not to clip his tongue.

How to Cope with a Speech Delay

What does tongue-tied really mean?


Long ago, before I had my very own tongue-tied child, I thought the term just meant someone who couldn’t quite get their words out right. Kind of a mental roadblock. I am a horrible public speaker. I write. I don’t speak. I stumble over words when I order a pizza! So that’s what I thought it meant.

That’s not the medical type of tongue-tied, though. The medical, by the way, is ankyloglossia, but even I just call it “tongue-tie.” It’s easier to say. So, you know that little skin-like ligament thing that you see when you lift your tongue? Go look in the mirror, I’ll wait. Okay, so you see how in your mouth, it’s way back there at the base of your tongue? Well, Jacob’s isn’t.

In tongue-tied children, that lingual frenulum is attached more towards the front. Some people have it attached maybe halfway up. Jacob’s is attached almost all the way at the front of his tongue. Basically, when he sticks his tongue out, it looks like a “W.” He also can’t stick the tip out further than just past his teeth, nor can he touch the roof of his mouth with his tongue.

Jake doesn’t really stick his tongue out much, and the few examples I do have aside from this one, well, do you want to play “See Food” with my son? Probably not!

With Jacob, I didn’t know he was tongue-tied until he was 2 and a half. He was already in speech therapy. Everyone just kind of missed it. He was a preemie and wasn’t breathing when he was born. Plus they broke his arm getting him out. In the midst of dealing with all that, I guess checking for a minor genetic trait wasn’t a priority. I totally understand.

I actually discovered the tongue-tie myself. We learned about it in biology. The picture looked familiar. I went home and checked Jacob’s tongue. He was definitely tongue-tied!

Does being tongue-tied guarantee a toddler speech delay?

Now, you would think that being tongue tied pretty much meant “toddler speech delay” for sure. Well, yes, Jacob had a speech delay. BUT, he was also a preemie. And a boy. Being a premature boy already increased his risk of developing a toddler speech delay. So did the tongue-tie cause it or was it due to other factors? Maybe all the factors played a role.

My Toddler doesn’t have very Many Words yet—should I be worried?

I did a ton of research and honestly, every study had a contradictory study. Some said yes it causes speech problems. Others said it really doesn’t.

As with anything, methods handling toddler speech delays with a tongue-tied child depend entirely on your child. If you discover the tongue-tie very early (newborn and young infants), a frenotomy (also called frenectomy) may be a good option. Basically, the doctor just clips the frenulum. It’s supposed to be relatively quick and painless. Your child may need to do tongue exercises after to prevent it from growing back. Jacob’s dentist told me that the only way to keep it from growing back is to have it done with laser surgery. Talk to your doctor about that. 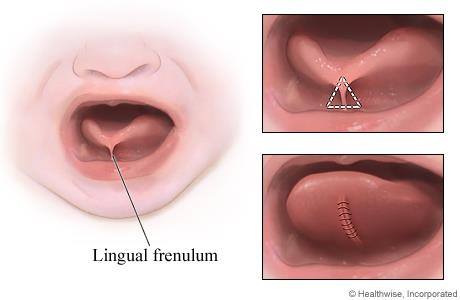 Since Jacob was older when I discovered it, his only option would have been to get it done under anesthesia. My son would NEVER sit still for them to cut part of his mouth with a scalpel. If your child is more easy-going about that sort of thing, you can still go with this option when they’re older.

I did not want to put my toddler under anesthesia for something that I thought could be overcome with speech therapy. As a former nursing student, I am well aware that the risks of anesthesia are pretty low. I didn’t care. That was my baby and no one was knocking him out for something that wasn’t life-threatening.

Jacob’s speech therapist- wonderful as she was- pushed like crazy for me to get his tongue clipped. She told me he’d never speak properly if I didn’t. A lot of people pressured me. I held my ground. I said “let’s keep trying traditional speech therapy.”

This is basically how I did it:

Jacob graduated out of speech therapy much earlier than even the therapist thought he would. Sometimes, with a toddler speech delay, all your child really needs is time.

As for Jacob’s tongue, I’m leaving the decision up to him. If he wants it clipped, I’ll take him to get it done. It no longer affects his speech in any way, so I feel like my decision to hold off was validated. If you have a tongue-tied child with a speech delay and everyone is pressuring you to clip, at least you can point to this and say “here’s a success story.” Not that you EVER need anything else but your own instincts to back up a parenting decision.

I hope this helped you better understand what it’s like to deal with a speech delay in a tongue-tied child. If you have any questions, ask in the comments. I’m happy to answer them if I can!