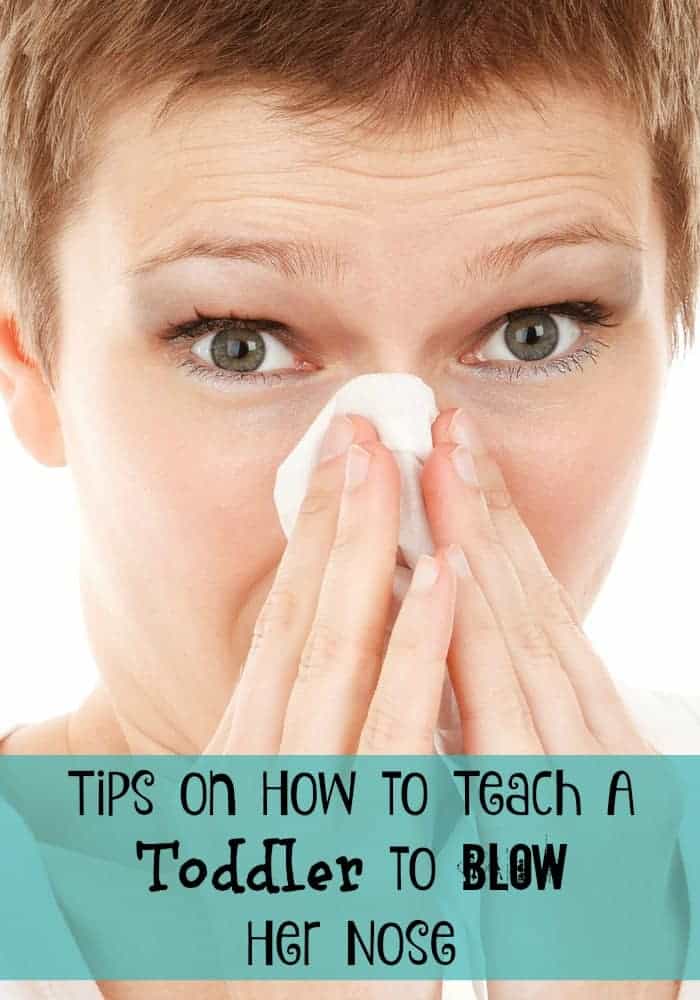 Tips on how to teach a toddler to blow her nose is one of those things they don’t give you in the parenting manual.  Oh you didn’t get one of those?  Yea, me either, wishful thinking anyways.  If there was one, I can only imagine this would be one of those fun tidbits they would leave out just to watch us struggle.  I do not claim to be an expert in teaching a toddler how to blow her nose, but these are just some tips I have learned.

Related:Your Toddler Asks: Where Do Babies Come From? What Do You Say?

How to Teach Your Toddler to Blow Her Nose

Model it for her!

You’re her super hero, the one she tries to emulate, right? Take advantage of that and actually model blowing your nose for her. It won’t give her the mechanics of it, but it will give her an overall idea of how it will look.

When you are trying to teach your child to blow her nose, first do it without the tissue.  If you were trying to teach her to tie her shoe, would you cover up the laces so she couldn’t see what you were talking about?  Start first by just getting her to blow air out of her nose.  I remember the first time I was telling my daughter to blow, she was doing it from her mouth, and the boogers were still there she wasn’t helping any!  So, toss the tissue, it will make it a little easier when you actually have to stick a tissue in her face.

Blow it at bathtime

Kids are little people who learn things by using their senses.  When she is in the tub, have her put her face to the surface of the water and blow out of her nose.  She will make bubbles and think it is the best thing ever!  This will be helpful when you have to get her to blow her nose and you can tell her to blow like she was making bubbles in the tub.

Bring back the tissue

Make it a big deal

I remember the first time my daughter actually was able to blow her nose and have some success.  She was so proud!  Each time after that I just had to remind her of the last time she blew her nose, how she was able to clear it, do that again.

This might be my biggest downfall.  I swear it is in their DNA to hate their nose being touched let alone prodded and poked to get boogers out.  No one likes to fight with their sick child to clear their nose, I mean we are only trying to help them what is their problem?  So have some patience, and just know that I promise you will not have a teenager who does not know how to blow their own nose.

It’s one of the fun parts of parenthood, boogers and nastiness (I hope you can sense my sarcasm here).  The sooner you can teach your child to blow her own nose, you will be a little happier.  I hope these tips can help you out a little the next time you find yourself wrestling with a toddler to clean out their nose!

How did you teach your toddler how to blow her nose? Share any other tips you have below!

10 thoughts on “Teaching Toddlers How to Blow Their Nose”