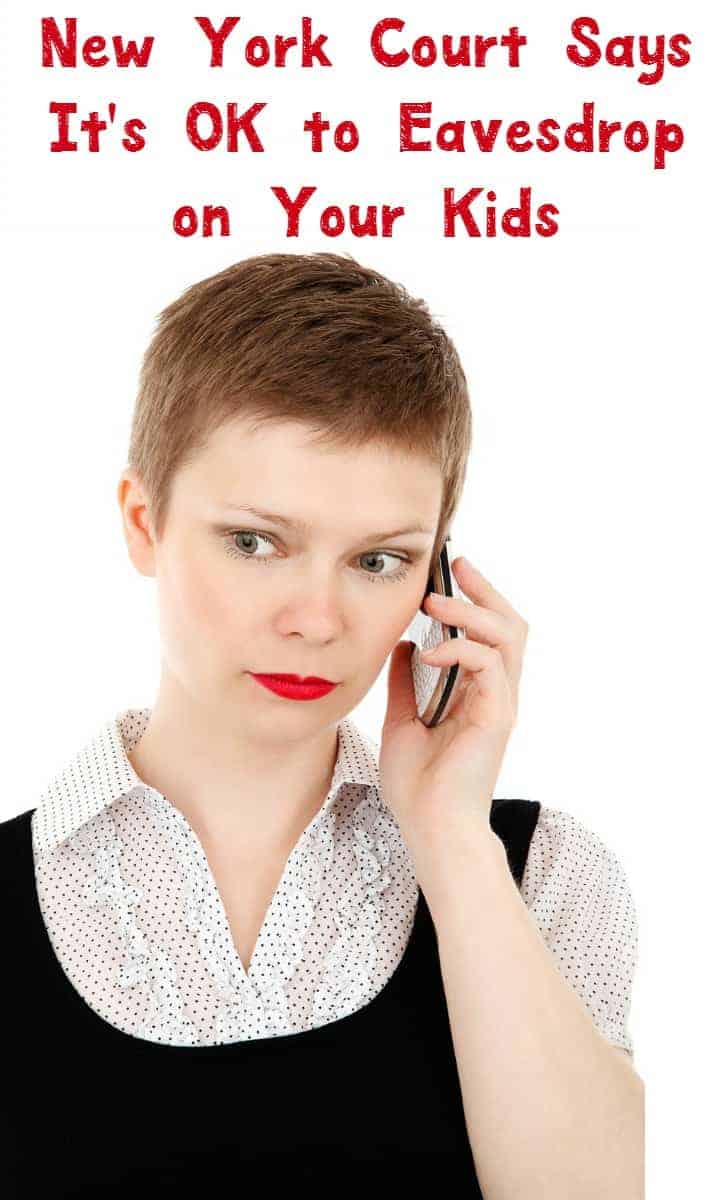 The top New York Court ruled Tuesday that it’s okay for parents to eavesdrop on kids if they feel they have a good reason. While this may sound like a bit of a no-brainer, the reason behind the ruling- and it’s wider impact- is actually pretty important. It came after a father recorded a conversation in which his 5-year-old son’s mother’s live-in boyfriend threatened to beat the child. Let’s talk a bit about this ruling and what it means to us as parents.

Related: How To Deal With Your Biggest Parenting Challenges

It’s OK to Eavesdrop on Kids for a Good Reason

First, a bit of back story on the ruling. According to the Associated Press, the ruling stems from the incident described above. The boy’s father recorded the conversation in which Anthony Badalamenti, the mom’s boyfriend, threatened a 5-year-old with bodily harm. Badalamenti was later convicted of child endangerment, assault and weapon possession. His attorney fought the conviction because the father illegally eavesdropped on his client. As I’m sure you know, the law typically states that you need permission from all parties to record a conversation.

This is where the New York Court of Appeals comes in. They decided that since the father had a reasonable concern about his child’s safety, it was okay for him to eavesdrop. This ruling does bring up some very valid concerns, though. Let’s talk a bit about those.

When is it okay to eavesdrop on kids?

New York didn’t specify an age limit for eavesdropping on kids, nor did they clarify “just cause.” It seems that they’re leaving that up to common sense. The ruling seems intended primarily for instances where you have a  young child talking to another adult, and you validly fear for that child’s welfare.

At what point, though, should you stop eavesdropping on your kids? Is it reasonable to spy on your teenager and listen in to their conversation with a non-custodial parent, for example? Do you have a right to hear to and record your 17-year-old daughter’s conversation with her boyfriend? How about the difference between only eavesdropping on your kids versus actually recording the conversation? These are questions the court didn’t answer. In my opinion (and keep in mind I’m not a lawyer), the heart of the ruling comes down to one major thing: if your child is in danger, you have a right to protect them, even if it violates the privacy rights of another party. I’m not saying I agree with that. Also not saying I disagree. That’s just my interpretation of the ruling.

Is this ruling a slippery slope?

Those against the ruling feel that it opens a Pandora’s Box of sorts, giving parents in nasty custody battles a whole new armory’s worth of ammunition. As an example, imagine that Susan and Bill are going through a custody battle over Bobby. Susan is a particularly nasty person who isn’t above using “below the belt” tactics to win. Susan’s also pretty good with technology. She records a conversation between Bill and Bobby in which the two are talking about Bobby’s favorite action game. Bobby asks Bill what he would do if he were a character fighting Bobby, and Bill says something like “well, first I’d knock you down with my club, then I’d take you out!”

Susan cuts the rest of the conversation and brings the “threatening” part to the police. Bill loses his battle because he’s considered a danger to his son. Sadly, I’ve known parents in custody battles who would do something just like that if given the opportunity. It’s not out of the realm of possibility, believe me.

The ruling also opens up other privacy issues. We are already fighting constantly to keep our rights to privacy in an increasingly technological advanced world. Some see this ruling as another way to chip away at those rights.

In the end, I’m honestly not sure how I feel about it. I think if it helps save the lives of children, it can be a very reliable and sound ruling. I can also see the other side’s concerns.

What do you think about this ruling? Do you think it’s okay for parents to eavesdrop on kids, especially if we feel they’re in danger? Can you see the other side’s arguments about the privacy concerns? Tell us in the comments!